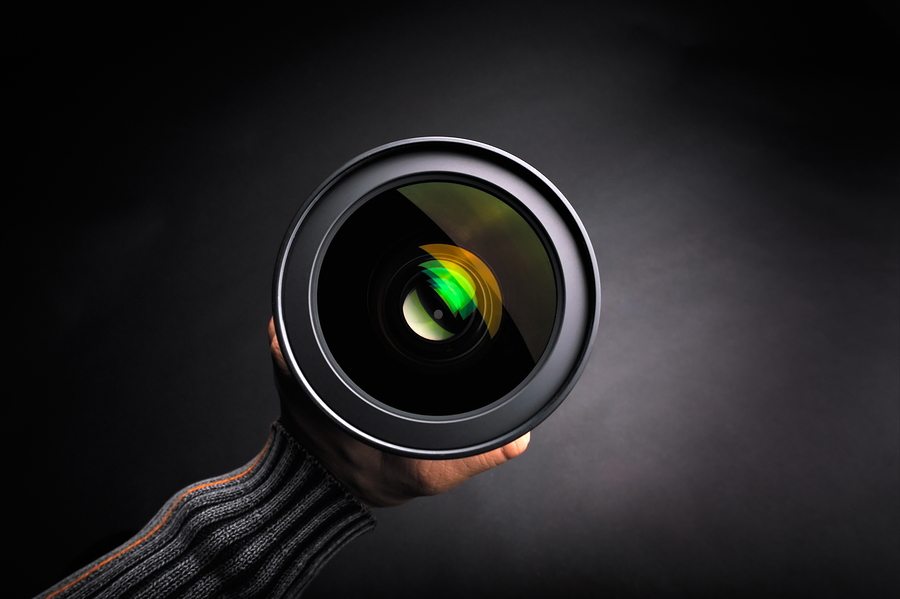 That is both a blessing and a curse. It means you can see every tweet as it streams past from your followers. But it can be overwhelming.

That is why using lists and #hashtags are vital to glean the gems from the garbage on Twitter.

The serious application of Twitter by business was ignored for a long time. Bloggers bent their head around it early but it struggled for adoption by bigger brands.

That is changing as the CMOs and marketing managers have worked out its place in the social media universe. Twitter was also its own worst enemy as its management chopped and changed over the years and it delayed rolling out its self service advertising feature.

Leadtail and DNN have just released a report that analyzed 504 North American marketing professionals in companies that were both business and consumer focused. It was carried out for the last 3 months of 2013 and was targeted at companies with 50-5,000 employees.

I have distilled this report down to the highlights that can be applied by both marketers and business owners. Here are 10 insights on how top marketers use Twitter.

#1. What social networks are they on?

What I find surprising here is the high penetration of the visual content networks such as Instagram and Vine. The other standout is how low Google+ ranks here.

I would put that down to marketers still being confused about how to use its reach and features. 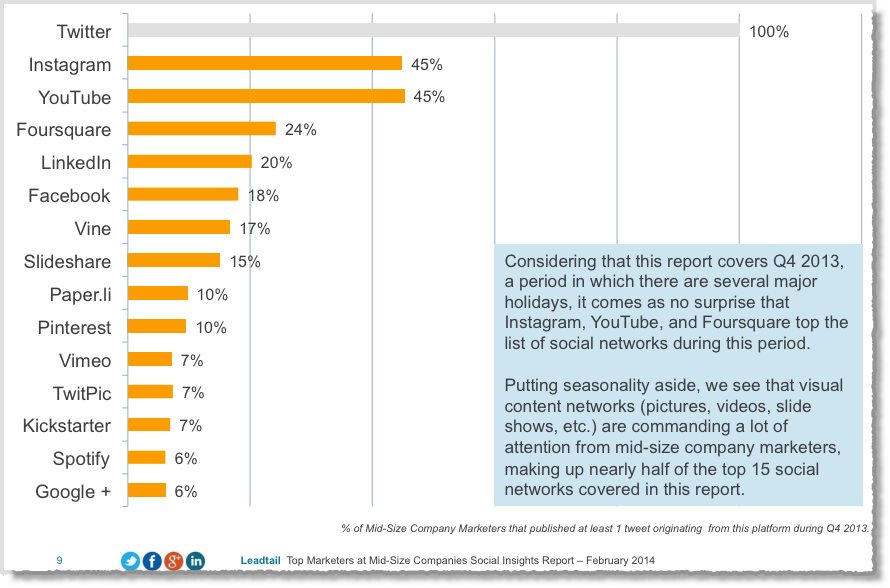 #2. What apps and platforms do they favour?

The increasing role of mobile is apparent here with nine of the top fifteen being “mobile apps”on this list. Hootsuite and TweetDeck are the platforms used for managing the Twitter torrent.

What is intriguing is that Flipboard makes it onto the list. Its development and launching last year of “personalized magazines” is maybe part of the reason for its rise. I have certainly found it both easy and effective and now post my articles to my “Jeffbullas.com Blog Magazine” on Flipboard. 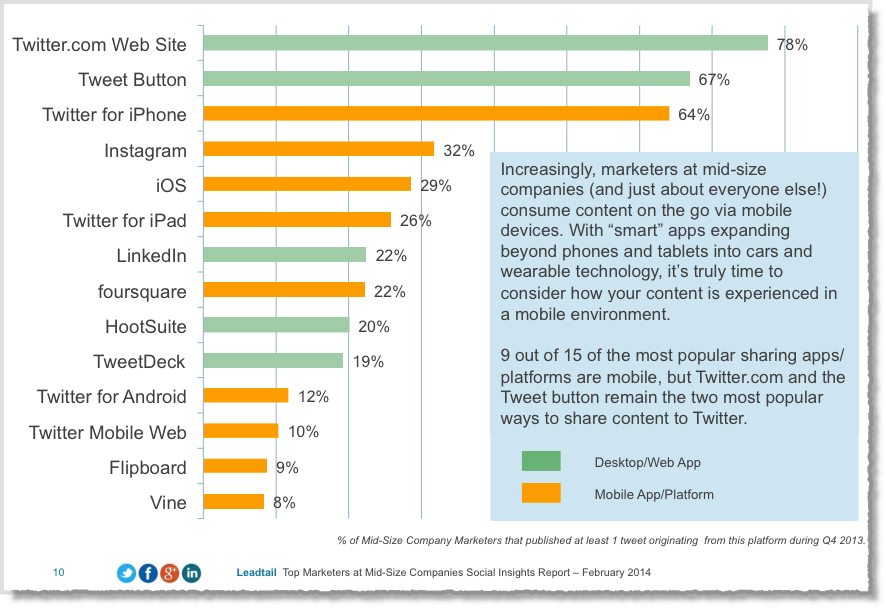 Mainstream media content makes the majority at 43% with industry media such as blogs not far behind at 34%. The report discovered that the content shared covers issues and trends including marketing, technology and leadership. 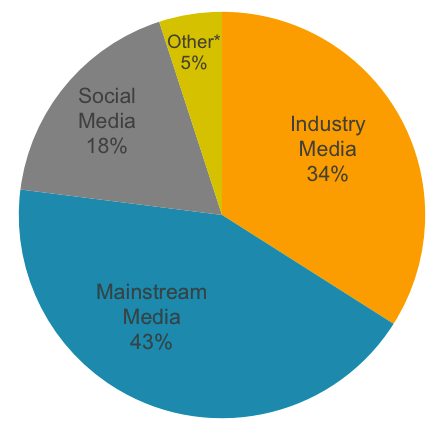 #4. What are the most shared mainstream sources?

Forbes adopted a very social media focused publishing strategy early on and its ranking is no surprise. Huffington Post is the first placed “new” media focused news source at #2. We  then have a mix of the old and new brands as top shared content sources. 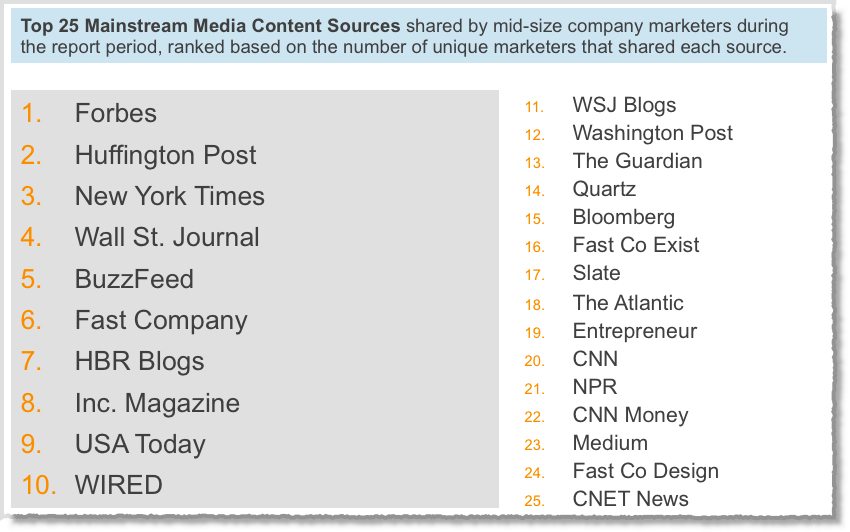 #5. What are the most shared industry sources?

Mashable ranks here at #1 and its success continues. It was maybe the first social media blog to go mainstream and compete with even the likes of Huffington post on news and other topic categories.

It’s good to  see Hubspot (which was an inspiration for me 6 years ago) in the top 25 along with some favourites of mine including Social Media Examiner and Jay Baer’s Convince and Convert. 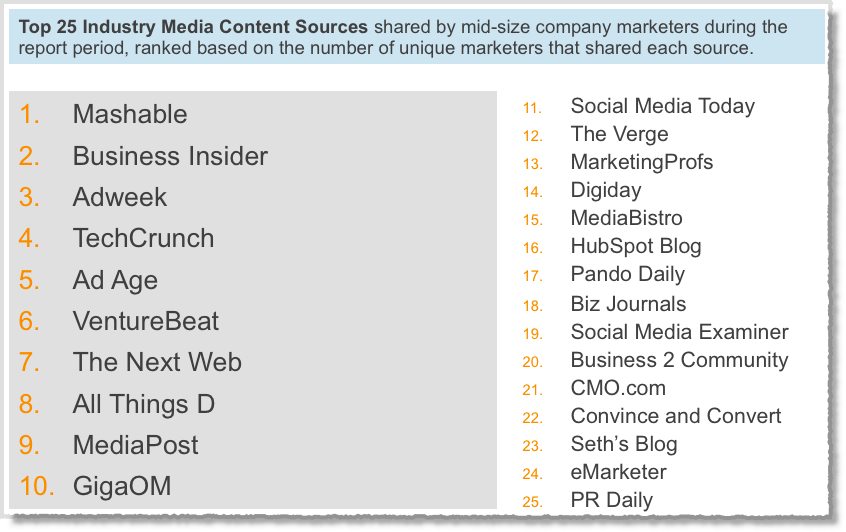 The top 10 includes New York Times, Harvard Business Review and even a sports brand @SportsCenter. Some software brands such as Salesforce and Marketo make it into the top 50. This comes from creating great content. 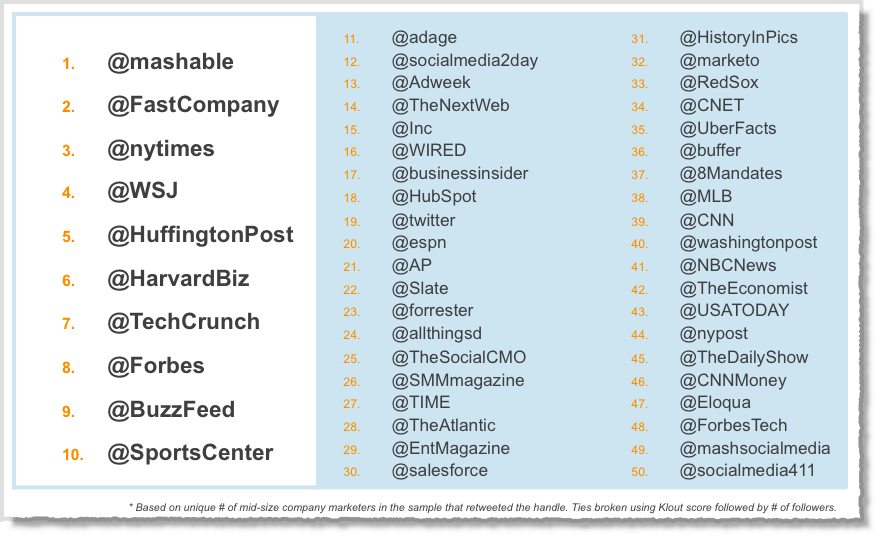 Hubspot sneaks into the top 10 which I would put down to the consistent publishing of relevant blog posts that drive conversations. Twitter also appears on the list at #3.

Some consumer brands appear such as Starbucks. They know how to do social and coffee at the same time! 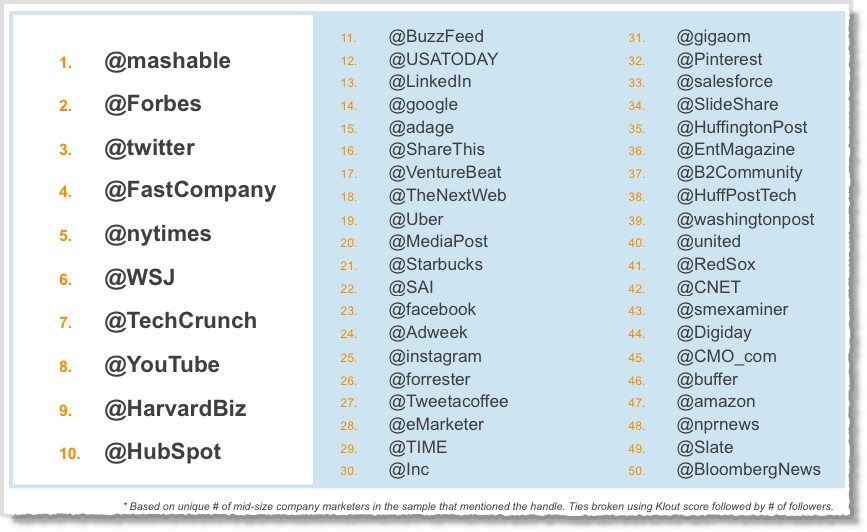 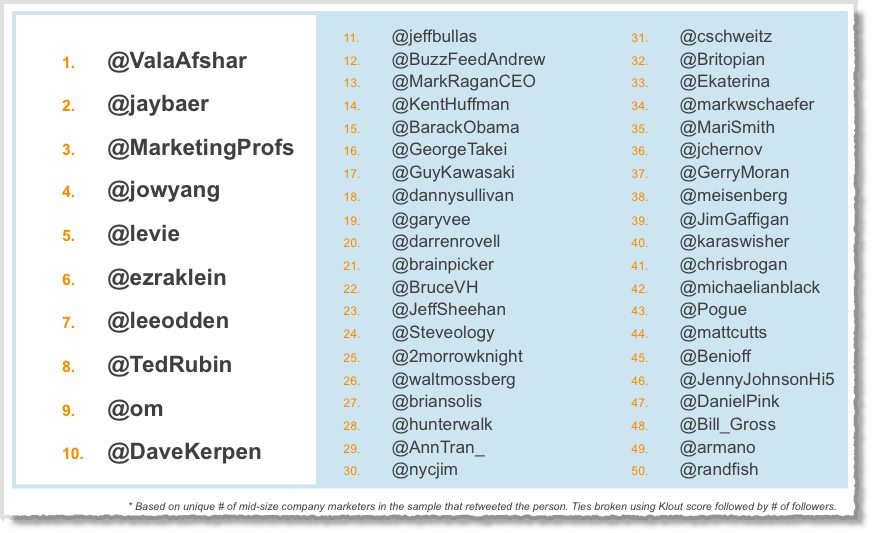 Also in the mix is Sheryl Sandberg (Chief Operating officer at Facebook) and some good friends who I have met along the way online and offline including Cheryl Burgess, Kerry Gorgone, Glen Gilmore and Mitch Joel. These passionate, creative and social media artists have been producers of awesome and insightful content for a long time. 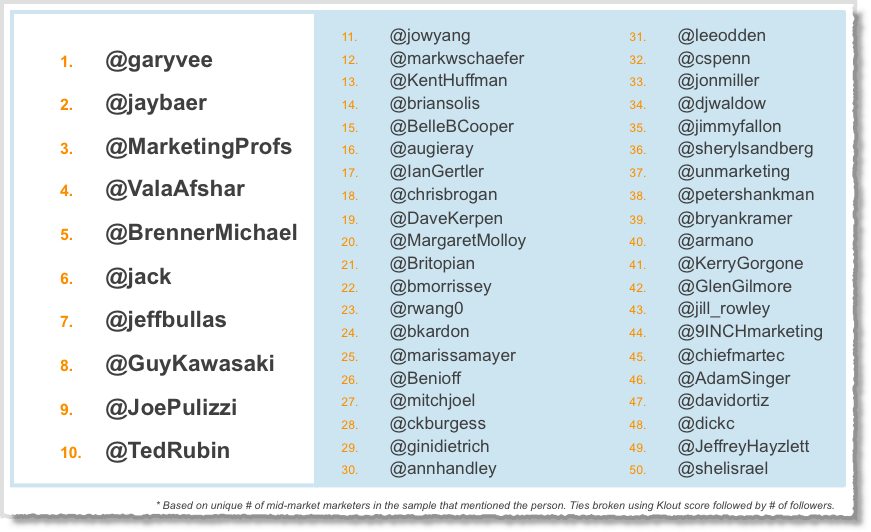 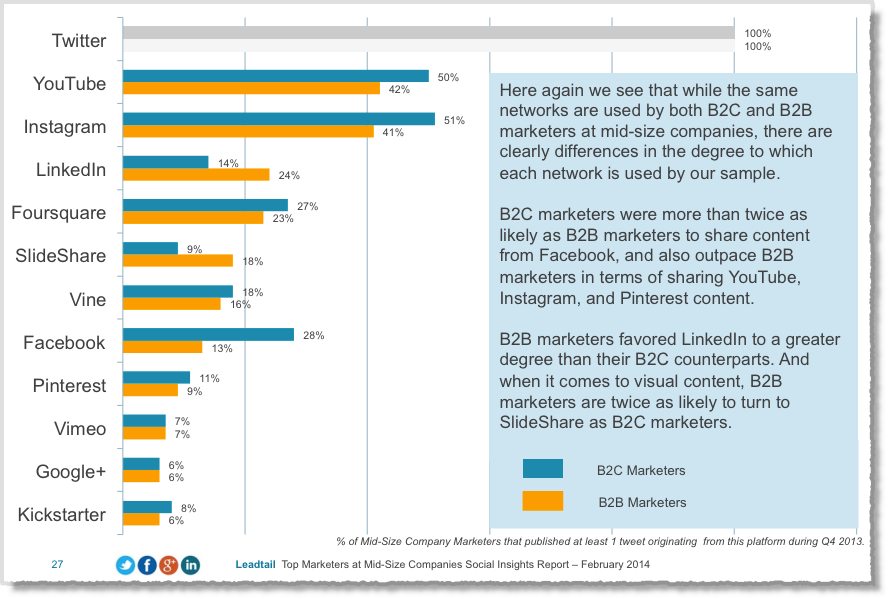 If you want to view the report in full you can download it here.

What was the most revealing insight for you from this report? Any surprises? 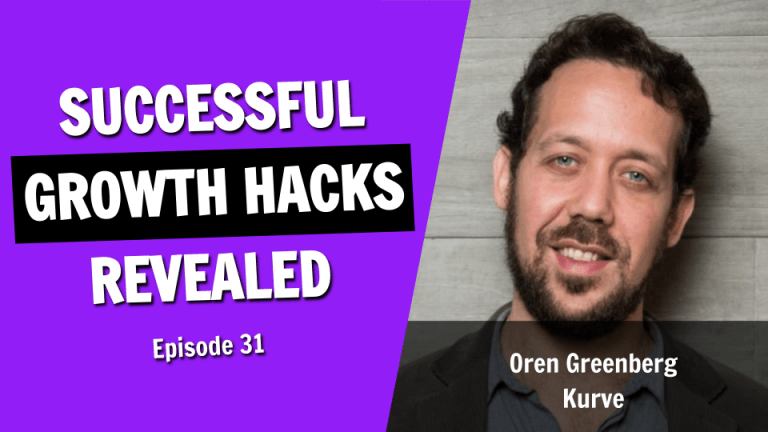