In my last post I mentioned that the social media ‘verse is full of some best kept secrets. YouTube is one of them. 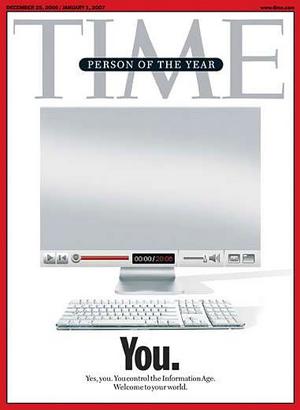 This Time cover from a couple of years ago (with the shiny mirrored screen) was prescient, but not quite enough… I’d cross that ‘You’ out and say ‘Us’. Hasn’t it felt that way these last couple of years? How we’ve grown a global collective consciousness?

Despite this cover, YouTube is not usually the first site that comes to mind when thinking about social media. I guess we take it a bit for granted while we wax rhapsodic about Twitter, Pinterest, Tumblr and Quora. Yet when I think about cultural shifts enabled by social media, YouTube is the place that comes most vibrantly to mind. It’s big, wide and deep. Mature. Eccentric. Probably not what you think it is.

Launched in 2005, YouTube has had a bit of time to mature and to find its own unique ‘language’. This is a process all new media go through – when they are first developed, people usually put them to much the same uses as the preceding media. Like when motion pictures were first developed and people only used them to record stage shows and the like, until someone invented new methods of narrative and human cognition adapted to the new stimuli.

YouTube is a culture in its own right. Different people and organizations use YouTube in different ways, but there are many common practices and themes. YouTube’s language is not just about videos – it’s about the million conversations taking place, that use video as a medium.

1. YouTube is the place to make money on the Web.

It estimated that during 2011 YouTube generated nearly 2 billion in revenue.

“The mobile ad market is growing fast and set to surpass $1 billion in the US in 2011. We also have a new milestone to share – YouTube now exceeds 200 million views a day on mobile, a 3x increase in 2010“.

2. You can learn anything.

Find the Khan Academy limiting? You can learn anything on YouTube, and you’re frequently learning from experts who are providing their expertise in specific response to community requests:

3. Standing on the shoulders of giants.

I have talked before about orbits. Videos are conversation. YouTube’s conversational culture is very embedded.

YouTube is the home of alternative media. Want to hear some real news? Tired of AM radio? Curious about aliens, ghosts or ‘chem-trails’?

Want to see an English teacher trounce a student in freestyle rap?

Copyright holders police YouTube, but not as consistently as you think. You can nearly always find the thing you’re looking for, although seeing long videos divided into 10-15 parts can be very tiresome. Still, it’s an amazing place if you enjoy the nether-regions of the long tail. Especially amazing for historical footage and formerly bootleg assets.

Whether you are an emerging chef with TV star aspirations, or have an adorable baby, YouTube is the place you can acquire some recognition, and maybe even some fame. The lady on the school bus was this week’s media darling (after a YouTube emerged of her being abused by kids on the school bus), which I learned about on CNN.

I made a random video one day and went back one day to a few thousand views:

7. We should appreciate our information freedom.

YouTube is uniformly banned in many countries. But it’s kept on the down low, so I asked my Ethiopian cab driver if it’s banned there. Because Skype is – and using it can get you 15 years in prison. Yes, was the answer. Also banned in China.

A lot of YouTube creators act as information filters – they find the best content and find unique ways to present it. They frequently instruct and summarize. I can’t possibly get to all the interesting conferences, so YouTube is a viable stand-in.

Here is my friend Wendy instructing her community on bento box goodies from Japan:

9. The cream does not always rise to the top.

Want to rent or buy videos!

According to New York Times “YouTube has been trying for two years to transform itself into a bigger revenue producer for Google by attracting advertisers with professionally produced videos and new kinds of ads. It now says it has 800 million unique viewers worldwide a month.”

Some of my favorite ‘Tubes’

Do you use it for educating or teaching yourself?