If Twitter to you is all about retweeting celebrities, uploading photos of tasty meals to Twitpic, and devising hilariously embarrassing TBT tweets, then you might be interested in these statistics: 77% of employers use social media to find candidates, and 20% of them use these platforms to screen out employees, too.

Which is to say, Twitter is bound to affect your career prospects, whether you’re explicitly using it for your career not. As such, it’s important to consider how both current and potential employers might view the content that you post — even more so to stop doing these 7 major faux pas.

Would you walk into a job interview, hold out your hand to the person behind the desk, and say, “Hi, I’m [your name], and I’d like to talk to you about this nation’s gun laws.” Um, no, of course you wouldn’t. And yet if you’re posting about incredibly polarizing topics on the public sphere of Twitter, this is essentially what you’re doing.

Unless you plan to go into advocacy, do yourself a favor and save it for private discussions with family and friends — not a platform where an employer who feels differently from you can become instantly biased against your entire person.

2. Forgetting that your audience is everyone

The controversial issue thing may be obvious, but oftentimes it can be difficult to even predict when what you’re posting is going to cause offense and pretty much ruin your career or even your business brand image.

Brands run into this all the time. In trying to make a quick joke, they forget who their core audience is, as well as the fact that everyone can see what they’re posting — and everyone is a big audience to please, with many people who might not feel that joke is very funny.

A good recent example is FAFSA, which tweeted: 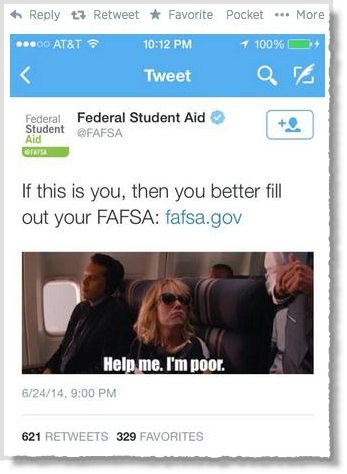 This may have been a fun, throwaway joke for whoever was at the keyboard, but it wasn’t for the millions of Americans who struggle with poverty, and who turn to FAFSA for the aid that will hopefully help them climb higher up on the economic ladder.

Individual Tweeters make similar mistakes all the time with dire consequences for their careers, so just remember to take the time to stop before you Tweet, examine your privilege, think about who might find what you’re saying dismissive and offensive, and rewrite if necessary.

3. Not having a focus

“Hey everybody! Here’s what I ate for breakfast!”

While it’s fine to cultivate a well-rounded Twitter personality, not having any focus can just make you seem, well, unfocused. It also means you’re squandering an opportunity to brand yourself as an expert in your field, which in turn can impress employers and help you land a job.

Lastly, an unfocused Twitter stream also makes growing a following more difficult, as you’ll turn away potential followers who might have been interested in one of your topics, but consider the 95 other topics you Tweet about to be spam.

Again, Twitter is about as public as it can get, so complaining about your co-workers, boss, company, and potential or current clients is a major no. In fact, if you’re a medical professional, therapist, lawyer, or anyone who is bound to a non-disclosure agreement, your Tweets could not only get you fired, but they could also get your license revoked and a major lawsuit dropped in your lap. Fun times!

Just as bad can be engaging in negative exchanges with other people on Twitter. All of the risks states above remain, and there’s the added risk that employers will interpret your mudslinging as a lack of empathy and interpersonal skills — two traits that are kind of essential to thriving in the workplace. So keep it nice, no matter how much the siren songs of trolldom beckon.

5. Tweeting way too much

Not only is Tweeting all the time annoying to just about everyone who follows you, but it also makes it look like you don’t have much of a life — not exactly the best way to build your reputation as an in-demand professional. If you’re Tweeting during work hours, your current employer will feel like you’re off task, while any potential employers will doubt your ability to stay on-task.

Instead, try to limit your Tweets and conversations to certain times of the day, so you can concentrate on your to-do list.

6. Focusing only on yourself

Honestly, truly, not even lying here, it’s really wonderful that you wrote a new blogpost and we all hope to read it soon — really. Twitter is a great platform for driving traffic to your expert content. It’s also a great place to share news about developments in your career, and even to let everyone know about your latest vacation.

But Twitter, used correctly, is a form of networking and goodwill building, and you can’t do either of those two things when you focus exclusively on yourself. In fact, you’ll find that many more job opportunities fall into your lap when you engage in constant conversation with people in your industry, whether in response to the things they post or as you discuss important industry topics. Combine that with sharing articles you find interesting and stimulating, and you’ll also be working to establish your taste and your expertise — all by looking outside of yourself.

A strategically placed hashtag is a great way to get your Tweets and content found on Twitter, especially for a trending topic. But too many of them, and you start to, well, look like a complete idiot. It’s impossible to discern what you’re actually trying to say, and half the time, that hashtag isn’t even a term anyone is searching.

Unless that hashtag really is as funny and ironic as you think it is, neither of those things will scream “intelligent person!” to a potential employer. So choose a hashtag or two, and call it quits — for the sake of your career, and perhaps for all humanity.

Used the right way, Twitter can actually be a great way to grow your career. But, given the public nature of the platform, it can also ruin what you worked so hard to build in a single Tweet. So use it strategically, and please, please, think before you Tweet!

Guest author: Beverley Reinemann is a freelance writer and blogger who spent three years travelling and working in Australia and New Zealand. Now back in London she splits her time between travelling, running her blog; Pack Your Passport, and her job in online marketing at Distilled.