Start Your Online Side Hustle
click here
Home » Blog » Is the New Facebook Timeline a Failure in Design? 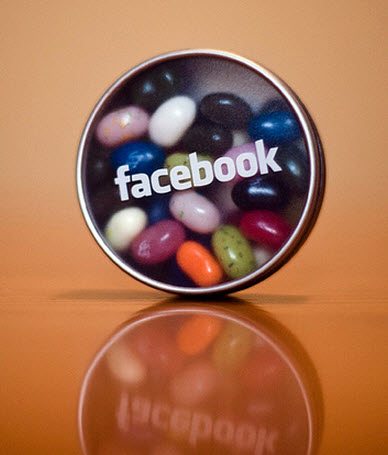 The majority of us like routine and familiarity.  Mess with someone’s habitual routine and watch them start to sweat, stress and squirm.

They also say that a change is as good as a holiday but is all change good?

Facebook’s new timeline is now live on both the personal profiles and pages and it has taken the known and familiar and replaced it with a very new design.

Steve Jobs said in an interview with Wired magazine in 1997 “People think that design is how it looks, but it goes much deeper than that, it is actually how it works”

The impact for business is that it needs to evaluate the implications of these changes to ensure that they maintain their engagement and utilise the stronger visual format that the brand “pages” now have.

So the changes are in place and the dust has settled, what are the implications for the managers, administrators and users of the “new”Facebook timeline “page”.

Is it a failure from a usability and design perspective? One study by Simple Usability looked at how viewers scanned and interacted with the new Facebook timeline and by recording eye movements and actions while users browsed online, they could see exactly what elements each user was drawn to, distracted by and engaged with.

Here are their key findings.

1. Cover images aren’t as important as you may think

We all love great photos but the usability study that looked at how people interact with the Facebook page showed that other than to orientate themselves with what Brand page they were on users paid little attention to both the cover and profile images.

“I think timeline like that works much better for a personal than a product page, I just think because it is a banner with a main picture, it just looks like advertising.”

2. Your company and its history is interesting

There are 2 key elements here that tell your company story. The “About” section and the Dynamic “Timeline” which can go back to when the company started and this new feature of the Facebook timeline is that you can post updates that are dated such as when your company or brand was established.

Feedback from one the users in the test group “Just the general information, I like to know a little bit about their background… I liked the bits where it said founded and a little bit of information on when they started and what year, I thought that was interesting. The websites, it’s not obvious on there but I liked seeing it on here.”

Scroll down to the beginning of Ben and Jerry’s Facebook page and you will see photos and information that reveal a great story about their humble beginnings at a renovated gas station in 1978. (thanks to Jacinta from the digital agency “Croagh INK” for pointing out this great story timeline to me)

It is certainly worth considering placing the important dates in your organisations history on the timeline. This will make the brand authentic and real. 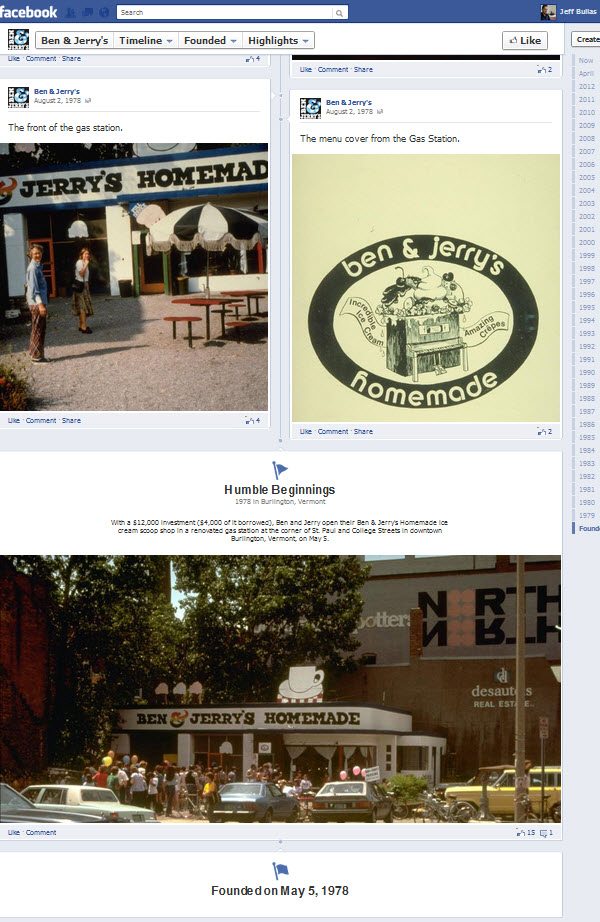 3. The Timeline needs to remain current

Regular updates keep the sequence of the Facebook page connected and tell a story over time. The study showed though that no users scrolled back more than a month.

Users appeared to be put off by the breaks in the “Timeline” as the new sections loaded and stopped scrolling.

Users feedback -“When it started loading February..I thought it had finished, because you know with timelines, it stops at a certain bit… so I thought that’s it… because there is a big gap and the big gap is quite misleading because there is more stuff later on.” 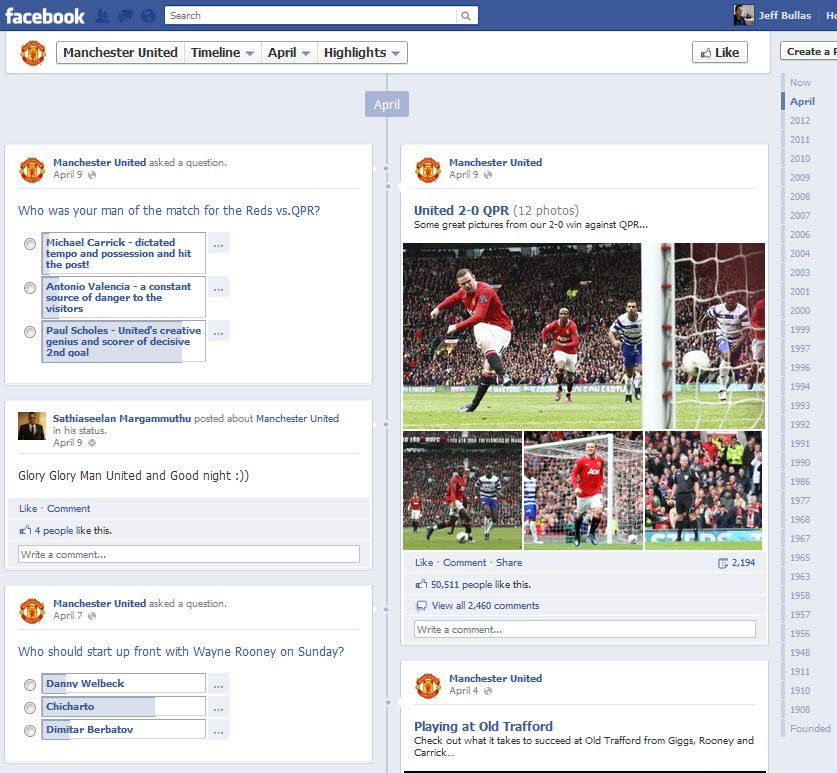 4. Users take notice of friend interactions with a brand

The research also showed that seeing which of their friends already liked particular page split user opinion on whether they themselves would also like the page.

A status update or a comment from a user’s friend was more likely to create motivation to interact withe page especially if it was recent.

The study also showed that the layout doesn’t differentiate the posts.

Few of the pages were utilising the pinned posts at the time of testing. Those pages that did had little effect; no users realised the pinned post was intended to be highlighted. 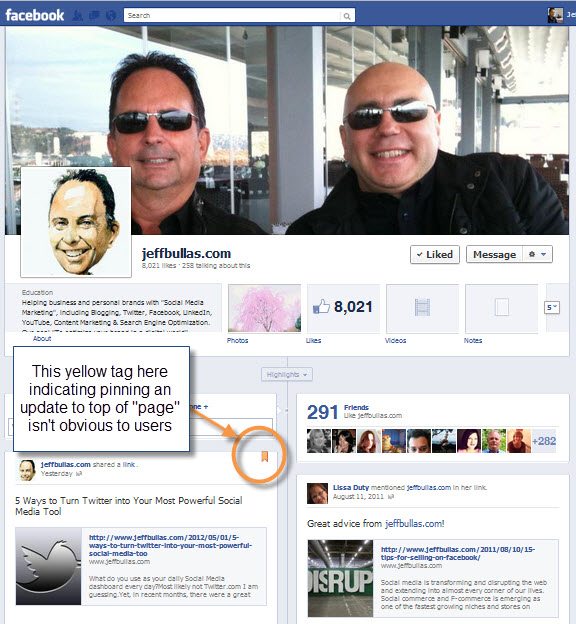 According to the study un-expanded app positions are the most important real estate.

Other than to click through and see photo albums, the majority of users failed to interact with the row of apps. More importantly, nearly all didn’t spot the arrow which makes all of the available apps visible.

Participant in the research said “I never even noticed that arrow, maybe it should be set out slightly differently.” 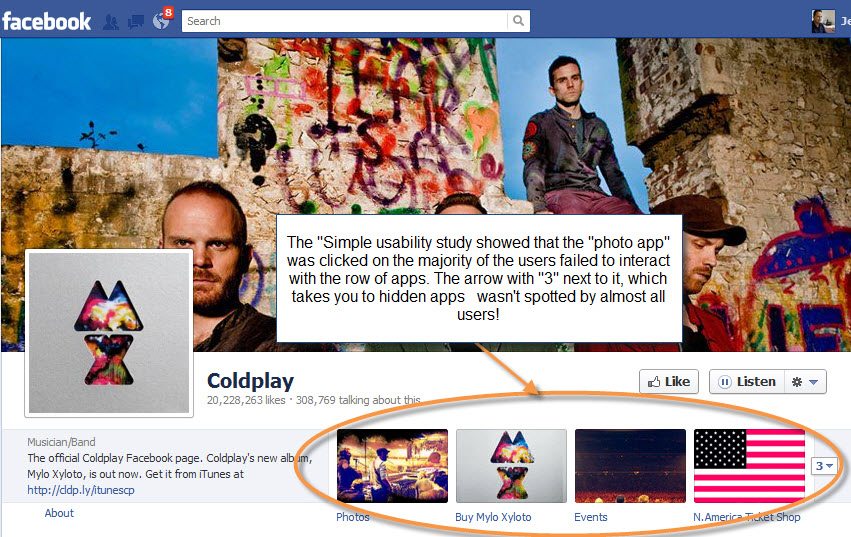 The study suggests that much in the new “Timeline” layout is flawed. Even following Facebook’s guidelines for creativity and opportunity isn’t enough as users are navigating as if using established design formats.

According to the study, here are the major takeaways:

1. Brands should also make full use of new functionality – such as the Timeline and cover Image – to engage users, being aware that the latter has to be used imaginatively and not just considered to be a Facebook ‘billboard.’

2. Page managers should consider how promotions, competitions and themed content can be contained within a specific timeframe that doesn’t require excessive scrolling.

3. There is also no longer the opportunity to set a default landing tab or application, so brand managers should think about how the cover Image and pinned post functionality can support and reinforce competitions and campaigns.

4. The relationships and interactions a user’s friends have with a brand are now more prevalent than ever before, as such brands should focus on nurturing positive brand mentions wherever they may be on Facebook.

“But is clear that the average user doesn’t fully understand the new layout, or interact with it in the way intended. The mechanics of obtaining ‘Likes’ has become more difficult for brands, they now need to drive engagement more than ever. Page editors no longer have the ability to set targeted landing tabs or applications for non-fans. In the past you could direct people onto a particular tab to encourage likes or interaction with a promotion“.

What do you think about the new timeline for Facebook?

Do you find it confusing? How do generate “likes” now with the new page?

How are you using apps and which ones are you making visible?

Do you think it is a user friendly design?