As I tweeted my way through the week, resucitated my “Koi” fish who had jumped out of the pond early one morning (and no I didn’t give it mouth to mouth, but yes it took me an hour and a half to save its slippery butt) and completed many of the mundane things of life, I contemplated how little we know about why Koi attempt suicide, whales beach themselves and why parents have teenagers (they were so cute once). So “Why indeed do we have Twitter”, well maybe the answer is because we can, and then we think of “What will we do with it once we have it?”

This weeks post may help you unravel some of the mystery of what to do with Twitter, but I don’t have the answer to the question of what to tell your teenager to do with their life, other than thinking about leaving home sooner rather than later. So here are some resources on different tasks such as using Twitter for SEO, as a search engine,  to sell your music, t-shirts and concerts, as well as some tips and tools to filter and control its streaming voluminous snapshot of the planets life and learnings.

So says Arnold Zafra on the blog  Search Engine Journal . “Although Twitter’s search market share is not significant enough compared to other search engine, it is still interesting to know that gradually Twitter search is becoming a real-time web search engine. After all, the Twitter Public timeline is part of the web. So, it is but logical that searches conducted on Twitter search should also be measured and interpreted.

Citing Citigroup’s analysis, an article at Mediamemo notes that Twitter-related search in May was registered at 30.1MM, with 4.2MM searchers, and 39.4MM result pages. While this only converts to .001 percent of the overall U.S. market share, it is worthwhile to note that this figure has even surpassed Time Warner Cable’s 22.2MM searches.

Clearly, Twitter’s effort at enhancing it’s search facility is paying well. And given its steady growth, in terms of userbase and page views, it would be just a matter of time before Twitter search becomes a big threat to Google and other search engines.

The ball is now on Twitter’s fence. Surely it needs to spike up its search feature some more with enhancements and usability that propel its search volumes. If it succeeds in increases search share, by then it could be a viable acquisition for either Microsoft or perhaps Google.”

2. “Twitter SEO – the Future of Keywords? What do you think?

Joshua Odmark says “the future in search appears to be how real-time data is going to be accessed by users. Twitter is at the forefront of this with its enormous feed of status updates from its users.

As we speak, the data is being parsed by hundreds of websites that use the Twitter API. This data is manipulated in many different ways. However, there is one way to search this data that will always be true, keywords.

The first is actual keywords as you imagine them, such as “seo” and then the hash tag version of keyword, such as “#seo”.

The first version, the actual keyword, is where I believe the future of Twitter exists. Let us take Google as an example. As we all know, arguably, meta data holds very little to no weight with Google (specifically the meta keywords). Hash tags are essentially meta keywords.

But for this particular article, I will focus on the first version of a keyword (without hash tags). I will address hash tags in depth in a following article.

In a character constrained world, timing and placement is everything. That is to say that where and how you use keywords in your Tweets is important.

There are a few things you must remember when using keywords on Twitter:

Techie Buzz  posted a while ago a post on 11 ways to schedule and send emails in the future, however lots of things have changed since then and people are using Twitter as a mode of communication.

So it lists several ways to schedule tweets in the future.

Joel Comm states that “apart from Twitter’s own terms of service which prohibit obvious things like harassment, transmitting viruses and spamming other members, there really aren’t many rules to the site. You can essentially use Twitter however you like.

However, for people and businesses who want to use Twitter successfully (eg: build a following and grow their circle of influence), there are a number of best practices that can be observed. H covers many of these in his book, Twitter Power.

He presents you with a list of Fourteen Types of Tweets

For journalists, the real question is whether Twitter is more than just the latest info-plaything. Does it “work” in any meaningful way — as a news-dissemination channel, a reporting and source-building tool, a promotional platform? Or is it merely, to buy the caricature, just a banal, narcississtic and often addictive time suck?

The unsatisfying answer: It all depends.

For anyone still in the dark about Twitter, a quick bit of background: Twitter, created by a San Francisco startup called Obvious and publicly released in August 2006, is a free social networking service that enables anyone to post pithy messages, known as tweets, to groups of self-designated followers. The tweets can be sent from and received by any kind of device — desktop, laptop, BlackBerry, cellphone. It’s like instant messaging or text messaging, but one-to-many, instead of one-to-one. Twitter has grown with astounding speed, attracting 17 million visitors in April, an 83 percent gain over the previous month, according to the research firm comScore.

Darren Rowse of  Problogger  says Twitter Search is just amazing because it can give you real-time feedback about pretty much everything. That is, if you know how to look for it. Here is how:

Before we start it needs to be pointed out that both TweetDeck and Seesmic (two of Darren’s  Twitter apps – with Seesmic being the #1) allow you to open special search panels, allowing you to “follow” a search term, instead of a person.

A blog post from Onlinemedia Daily summarizes the Panelists from companies including Six Flags, Dunkin’ Donuts, and Comcast who were gathered at the OMMA Social conference highlight Twitter’s versatility as a marketing and customer service tool as well as its value in letting big brands connect informally with consumers.

Eric Eldon of  Digital Venture Beat says Twitter users, most of whom signed up for the site and then apparently stopped visiting, are actually coming back, new data from comScore suggests. There’s been a lot of evidence that Twitter’s growth is tapering off by several measurements: monthly unique visitors, searches, and mentions in the media. But as VentureBeat guest columnist Jesse Farmer postulated in May after crunching a lot of Twitter data, the mass of people who aren’t early adopters could just be taking a while to warm up to using the service

But as Erick Schonfeld shows in an excellent analysis of comScore’s numbers, other new data indicates a bigger story. Worldwide pageviews came in at 900 million for May, a 30 percent increase over April, with the average user now logging on almost daily. And this traffic was partly driven by people coming to read tweets on the site, not necessarily to tweet themselves.

Ben Parr at Mashable  says that “YouTube is not only a great way to watch endless hours of cute kittens doing people things, but a way to learn about a range of topics visually. Users have put up thousands of tutorials ranging from animal care to our favorite microblogging tool, Twitter.

Whether you want to get your best friend started on Twitter or want the scoop on some of Twitter’s best desktop apps, the following YouTube videos will keep you entertained while educating you about various aspects of the Twitterverse. Oh, and be sure to look out for the video of the man in the fur suit.”

Retweeting is an integral part of the Twitter experience. The retweet (or “RT”) allows Twitter users to share the best links, tweets, and gems they find from others using the service. But for beginners, it’s not immediately obvious what retweets are, or what tools to use to make retweeting easier.

This HOW TO article not only covers the basics of retweeting, but also highlights some of the best web and mobile-based tools for retweeting and tracking RTs in real-time. If you’re a Twitter beginner, we hope you find it useful; if you’re a more advanced user, we hope you’ll share it with friends who are just starting out.

11. Case Study on ” How a Musician Made $19,000 in 10 Hours Using Twitter and The Web” … Love the creativityin this post!!!… shows the lengths some “New Media” savvy musicians go to to get noticed and along the way make some money !!! How was it done?

Can Twitter change the downward spiral of music sales?

A great resource at the Select Courses Blog that provides a list of 100 tips, tools and resources for Twitter research that will help you keep it all together, when listening to all that Twitter noise.

Mari Smith  has created this five-part model – the ABC’s of Social Media – to simplify your social media efforts. She discusses how people come to social media and attempt to short-circuit the process by over-automating, over-broadcasting, over-delegating and

miss out the vital component of connecting, engaging and 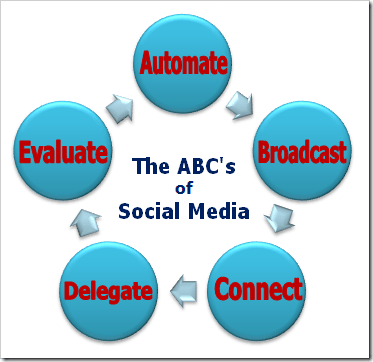 building relationships. She says that “Once you’ve confirmed

with your brand, messaging and systems for capturing leads, apply

What do you think a good concept or flawed?