So you want to excel at what you do, you want to be the best,  then the famous quote  “If you want to fly like an eagle don’t hang out with the turkeys” is worth taking note of.

To help give you that boost to take off and escape the mundaneness of the ordinary you need to emulate successful people and CEO’s certainly fit into that category. 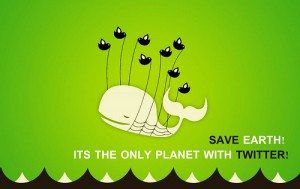 Bloomberg recently listed what some CEO’s thought of Twitter and how they used it for their personal and corporate brand.

So what are some of the creative ways Chief Executives are using  Twitter?

How Twitter helps him run O’Reilly Media: “Twitter is a great way to ‘watch the alpha geeks,’ which is my shorthand way of saying that a lot of what we do at O’Reilly is pay attention to people at the edge and look for technologies that are ready to move from the edge to the mainstream that we can help along by publishing, conferences, magazines, online publishing, or activism. There’s this great William Gibson line that I use all the time: ‘The future is here. It’s just not evenly distributed yet.’ And sometimes we describe what we do at O’Reilly as ‘redistributing the future’ and helping it to get here more quickly.”

“To have questions answered”

How Twitter helps him run Technorati: “I subscribe to lots of people who say interesting things, and I listen [and] read a lot. I find that these people become a sounding board for ideas, and I learn a lot from them. When I post to Twitter, sometimes it’s about interesting things I’ve seen or observed, and sometimes it’s ‘questions to the world’—where to find a good consultant for a particular niche specialty—or I ask questions that I can’t find easy or reliable answers [to] just by searching Google or reference works.”

How Twitter helps him run Twitter: “It’s the fastest and best way to get feedback on what we’re doing, how we’re doing it, and what we should do next, both from users and my co-workers. Speaking to the latter point, Twitter makes our company feel smaller and more cohesive. There is something to be said about sharing the small details of your life with those you work with daily.”

How Twitter helps her run PerkettPR: “We tweet about our own industry insights, technology, PR, and more—and people have been receptive and responsive. We feel we’ve earned a new respect as communications professionals in this way. We’ve had the advantage of receiving ‘first mover information’—benefiting both our agency and our clients—by connecting with reporters who often tweet about what their stories are going to be before anyone else knows about them (like this one!) and analysts/influencers—some of whom have shared early insights into reports or other important information that they only offered to their Twitter followers.”

How Twitter helps him run Matchmine: “1) It helps make me more of a real person to my team. 2) It helps me stay closer to what’s happening in the lives of my own people. 3) It’s an invaluable business networking tool. 4) It helps me raise Matchmine’s visibility among the thought leaders online. 5) It’s just plain entertaining.”

So what are some of the creative uses you have found for Twitter?