side hustle
strategies
Thinking of starting a side hustle? CLICK HERE
Home » Blog » 5 Inspiring Books That Are Transforming My Life and Business 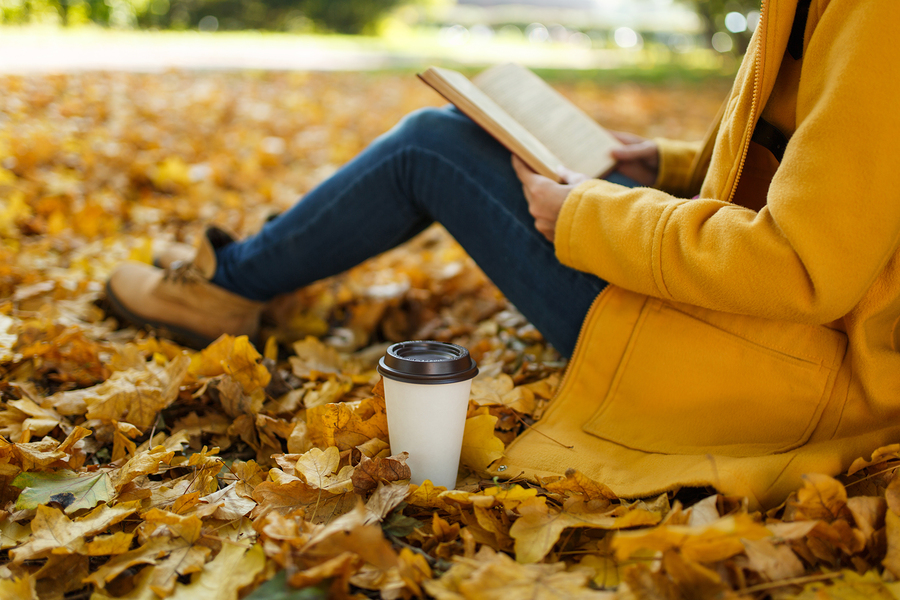 The news was horrifying.

There had been a mass shooting.

Then another story broke.

Some madman with his fingers on a big red button with megalomania syndrome was testing nuclear weapons.

It’s not a good way to start the day.

If we listened all day to the 24/7 news cycle we would all be clinically depressed.

I hate to break it to you but things in general are quite good.

The big picture is positive.

The truth revealed by the data tells a different story that big media wants you to hear.

The world is getting better.

But I am an eternal optimist.

So below are 5 books that may help you in your life and business.

Add something to your life and change you.

One word at a time.

This first book “Enlightenment Now” reveals the truth beyond the depressing daily news.

In the book “Enlightenment Now: The Case for Reason, Science, Humanism, and Progress”  Steven Pinker reveals some facts.

And Bill Gates said “My new favourite book of all time“. 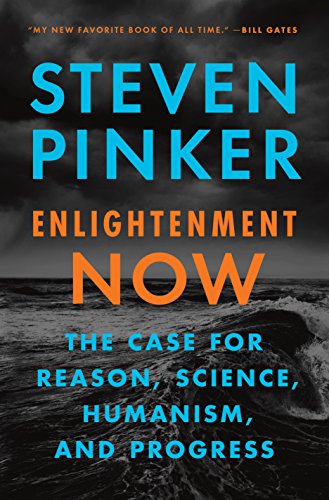 Here is a snippet of how good things have become in the last 200-300 years as revealed by his exhaustive research.

Life expectancy – In the mid 18th century the life expectancy was 35 years in Europe and the Americas. For the world as a whole it was 29. But starting in the 19th century life expectancy began to rise. The answer in 2015 is 71.4 years. I know when I would rather live.

Health – Research has shown that discoveries by just 100 scientists have saved over 5 billion lives. These include Karl Landsteiner who saved an estimated 1 billion lives with the discovery of blood groups. And we can thank people like Edward Jenner who discovered vaccination in 1796 and Willam Foege for saving over 300 million people from Smallpox which has now been eradicated since 1977.

Wealth – Between 1820 and 1900 the world’s income tripled. In the next 20 years it tripled again. And it has kept rising. Today the Gross World Product has increased almost 200 fold since the start of the Enlightenment in the the 18th century.

Peace  – Wars between great powers have (including world wars) are the most intense form of destruction that the human species has dreamed up. At the dawn of the modern era in the 1500’s the great powers were almost always at war. But the decline has been marked. There hasn’t been one since the USA fought China in Korea over 60 years ago. 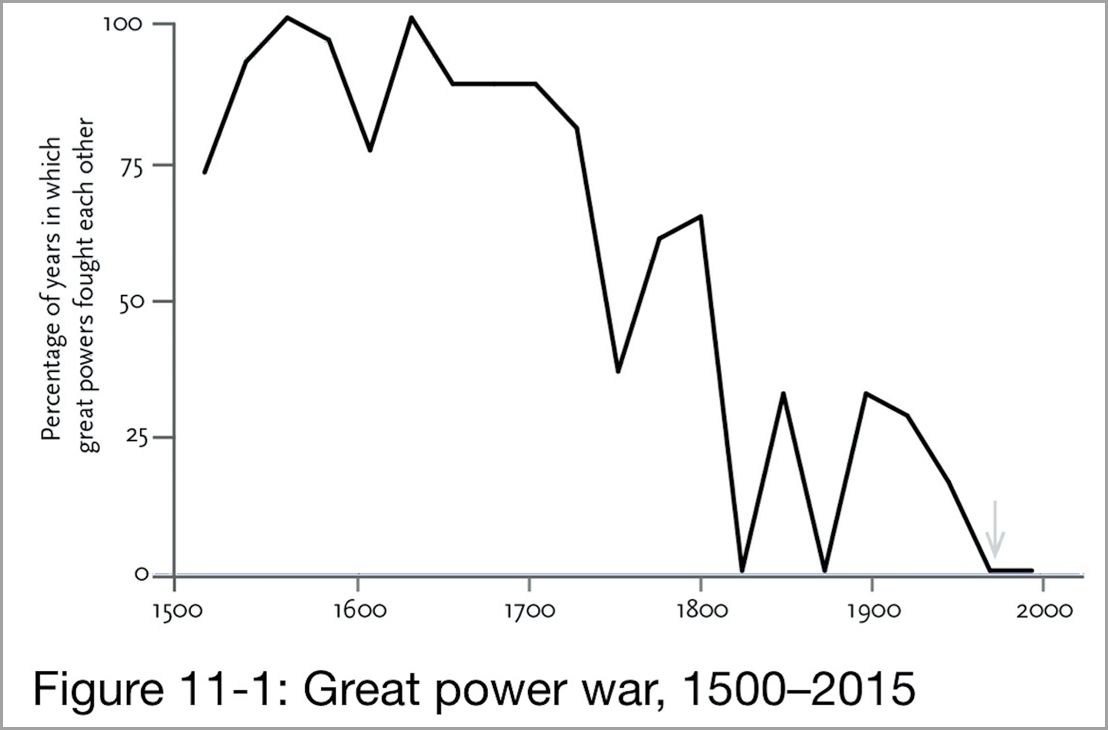 It’s not just the great powers that stopped fighting each other with armed conflict between two nation states also in decline. There have been no more than 3 in any year 1945 and none in most years since 1989 and none since the American led invasion of Iraq since 2003.

Environment – Wealth is one thing but at the cost of destroying humanity and the planet we inhabit and is our only home would be foolish. Progress needs to be sustainable. As the world has got richer nature has begun to rebound. London no longer has a fog (coal smoke), the waterways of Puget sound and the Great Lakes are now being re-colonized by fish, birds and sometimes swimmers. The wealthier a nation the usually the better its environment. Oil spills have dropped from more than 100 in in 1973 to just 5 in 2016.

It doesn’t mean there is a lot more to do.

Underlying this progress is something that has made this possible.

And a willingness for humanity to toss off the cloak of old ways of thinking and continue to evolve.

To grow and progress. 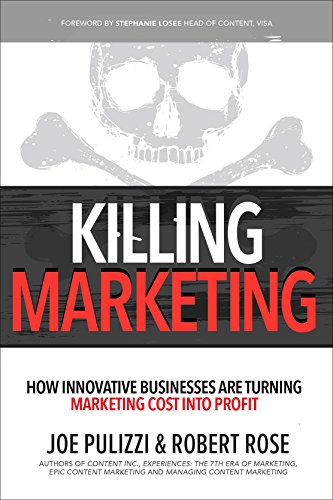 What are my biggest takeaways from this book?

The first one It is summed up in the quote I stumbled across on Jeremy Epstein’s blog.

“Sales – you call them. Marketing – they call you.”

Content marketing is an ongoing investment that attracts an audience…. and leads and sales.

The other key insight was the new and innovative revenue and business models for new age online publishers. The challenge is for organisations, brands and businesses is to think of themselves in a digital world as media companies.

And not just a soulless brand.

If you don’t believe in content marketing yet, then this book may turn and transform your thinking.

Donald Miller in his No. 1 Wall Street Journal Bestseller “Building a StoryBrand: Clarify Your Message So Customers Will Listen” could be a game changer for how you reveal your business and brand to the world. 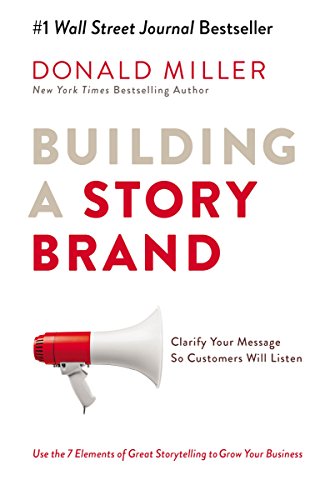 In between the covers he reveals the seven universal elements of powerful stories to teach readers how to dramatically improve how they connect with customers and grow their businesses.

The key takeaway for me was that you need to make your customer “the hero” and not your brand. You are just the guide that shows them the way and has a plan.

That is the opposite of what marketing 101 tells you.

If you don’t yet believe in the power of storytelling as a differentiating tactic in your marketing then this book may change your mind.

#4. The Obstacle is the Way

Ryan Holliday in his cult classic book “The Obstacle Is the Way: The Timeless Art of Turning Trials into Triumph” reveals the message of the modern stoic. 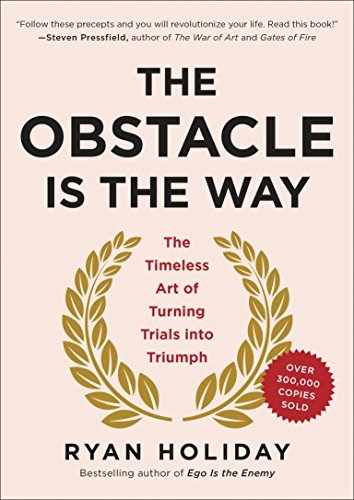 As revealed in the book.

“Stoics focus on the things they can control, let go of everything else, and turn every new obstacle into an opportunity to get better, stronger, tougher. As Marcus Aurelius put it nearly 2000 years ago: “The impediment to action advances action. What stands in the way becomes the way.”

It’s truth resonated and inspired me to write the post. “3 Life Lessons I Learned the Hard Way”

If you are looking for comfort and want to keep sitting in the safety corner then this book is maybe not for you.

If you want to grow and learn from life’s pains, problems  and trials then you will be inspired.

In “The Storytelling Edge: How to Transform Your Business, Stop Screaming into the Void, and Make People Love You” they also show and pose the importance of brands using storytelling in their marketing. 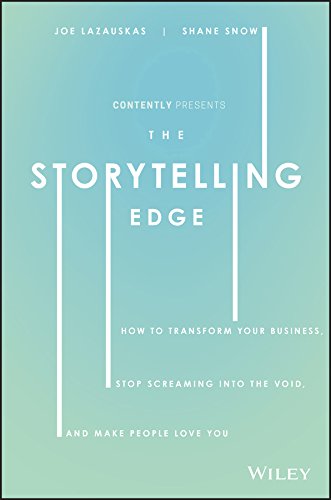 This book is not just about the art and importance of storytelling but the science and tech to do it at scale.

They dive into the “Two Big A’s” of Automation and Artificial Intelligence to reveal how their platform can amplify and optimise your content marketing.

If you are a content marketer or an entrepreneur that wants to make a bigger impact then this is a must read.

It is the future of marketing.

Books are my mentors and inspiration spaces and places.

They take me on journeys and reveal worlds I haven’t seen or even imagined.

They are time machines.

I never cease to be surprised at people’s creativity and drive to make a difference and strive to make the world a better place.

I hope you find these books as inspiring and informative as I did.

Here are some other books you may enjoy 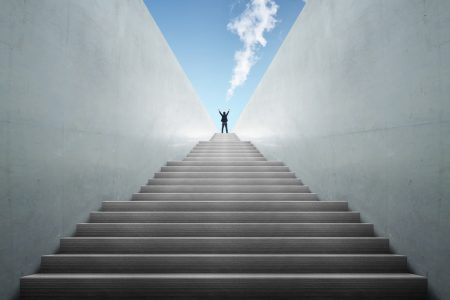 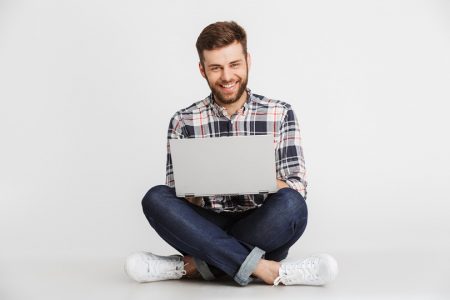