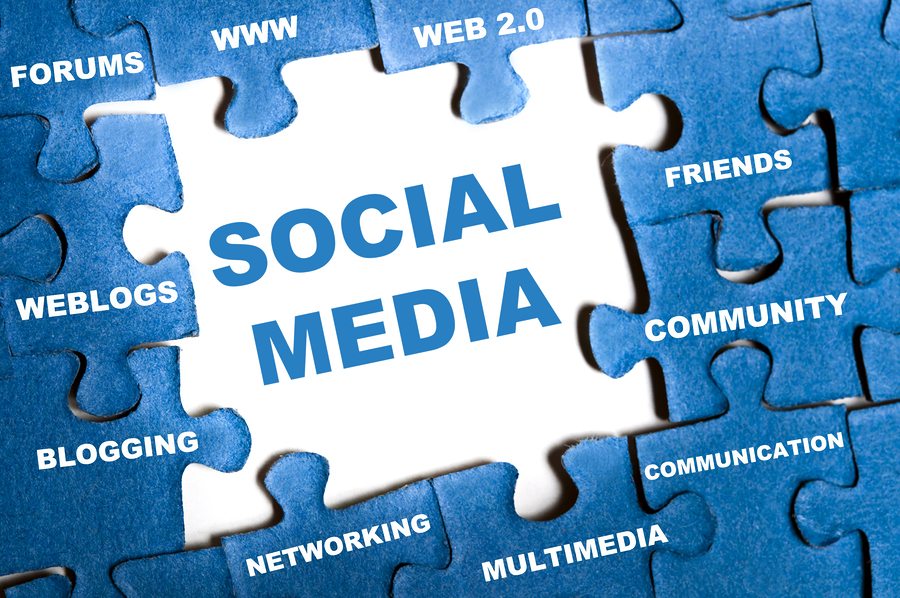 It’s no secret; social media marketing isn’t as straightforward as it used to be and consumers are getting more socially savvy by the moment. Today’s consumer no longer just hopes, but expects their favorite brands to continue to offer them new and innovative ways to engage socially.

As the social media landscape evolves at lightning speed, keeping up with trends and exploiting them is time consuming. But we’ve tracked down six unique brands that are doing an exceptional job of it. Sure they enjoy big budgets and professional marketing teams, but businesses of all sizes can replicate their tactics on a smaller scale.

Read on and discover six brands that have their social media marketing strategy down pat and why their approach works. Plus, get helpful takeaways and tips that will kick your social media campaign into the 21st Century.

Explore Oreo’s social media and you discover more than the iconic cookie with a delectable cream center. You’ll be treated to a wealth of catchy videos that will engage you with the brand in unexpected ways.

What are some of its key effective social media marketing strategies?

Through its Wonderfilled campaign, Oreo uses 30 second video clips to show what happens when a variety of people get their hands on an Oreo. From American hip hop recording artist Chiddy Bang to country music artist Kacey Musgraves, and even an ordinary little girl singing about the joys of sharing Oreos with her dad, Each video targets a different audience and has a specific theme, but they are all equally captivating and perfect for the viewer to share on their social media outlet of choice.

In addition to these targeted short video clips, Oreo also offers “Snack Hacks.” Snack Hacks are a collection of YouTube videos that are about 10 seconds long and provide the viewer with cool and unexpected ways to enjoy an Oreo. The videos are very simple, short, and effective at letting the viewer know there’s a lot more you can do with an Oreo than dunk it in a glass of cold milk.

Takeaway: With apps like Vine and Viddy, making a short video to showcase your product or service is easier than ever and won’t break your marketing budget. Then share your creation on Facebook, Tweet about it and add it to a board on Pinterest. It won’t be long before your followers will look forward to your short, creative works.

Red Bull sold 5.2 billion cans of energy drink in 2012, making it the most popular energy drink on the planet. There’s no doubt its social media had something to do with it, as Red Bull uses content marketing and social media to create a lifestyle that its target is thirsty for.

If there’s any brand out there that knows its buyers persona, it’s Red Bull. Red Bull’s website is smothered with thrill-seeking athletes, rappers and race car drivers who tout the brand.   Here are just some of its key social media marketing tactics.

Photo of the week

It’s “photo of the week” gets viewers talking, Tweeting, sharing and engaging with the brand.

Head to Red Bull’s Facebook page and you’ll learn about its crowd pleasing upcoming events or play one of its addictive games.

Drop in on RedBullTV and experience all of life’s adventures right from your otherwise boring cubical. RedBullTV lets you watch your adrenaline heroes shred the slopes, surf a radical wave or tear up a BMX circuit.

Red Bull also offers a slew of apps just to add to the mix.

They also go to extremes with its social media, and extreme is what the brand is all about. Red Bull does an amazing job of getting consumers pumped up about its product, and fueling their belief that if they drink Red Bull, they’re part of something bigger. Red Bull’s social media isn’t about the drink, but it’s selling it like crazy.

ADT is using social media to reinvent its brand and roll out a relatively new product. Along the way it’s gaining a reputation for riveting entertainment. 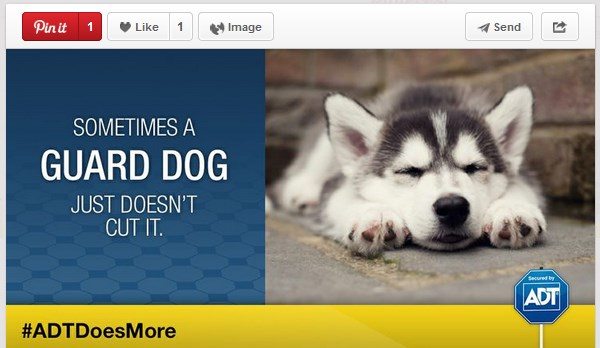 Once upon a time, ADT was “just” a security company. Today, ADT products can help you manage your home’s HVAC system from around the world, text you when your kids get home from school, and even give you the power to unlock the front door for the housekeeper, right from your smartphone. ADT has put a great effort into developing technology that not only enhances what it’s known for best (home security) but also in offering consumers new lifestyle products and services like ADT Pulse.

Through social media, it’s spreading the word out about its changes and helping consumers identify with the brand in a new way. As a bonus it’s adding a touch of humor and a dash of entertainment to a product that’s inherently a bit boring.

Here are some of their top tactics.

ADT’s Pinterest page offers everything from crime statistics, to moving tips, spring cleaning tips and an especially entertaining look at how sometimes a guard dog just doesn’t cut it.

Its Facebook page offers users the chance to tell their story about how ADT has helped them.

Its YouTube videos are second to none. ADT Home Turf Play gives the viewer a peek inside the homes of professional athletes that show off how they use ADT Pulse. Brilliant!

Takeaway: If you’re moving your brand in a new direction or expanding a facet of the brand, social media can be an effective way to get people thinking about it in a new light. Social media is also perfect for jazzing up an otherwise hum-drum product with humor. ADT proves that no matter what your industry is, social media offers the opportunity to generate amazing social buzz. 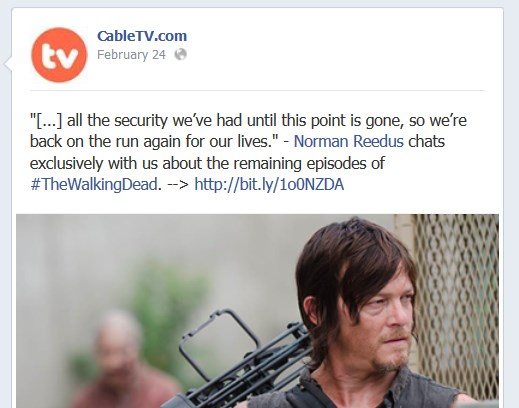 One way it does so is through its Facebook page, where fans are treated to teasing headlines and an array of short interviews with some of TV most buzzed about stars. The page is filled with what’s hot, late-breaking and opinion stirring.

CableTV.com also does a knockout job of asking for viewer opinion by posing interesting questions and, in doing so, it’s collecting valuable information about its target.

CableTV.com’s Google+ page is equally entertaining as its Facebook page, and proves Google+ doesn’t have to be so darn serious! For example, a recent post asked “Thus far, clips from #thetonightshowwithjimmyfallon have ____ many views. Go ahead, take a guess” and then prompted the reader to take a look at the answer here, which smartly directs them to the CableTV.com blog.

On a final note, CableTV.com makes good use of hashtags. Its posts aren’t drowning in them, but they are used when appropriate.

Takeaway: Use tactics like polls, fill in the blank, and open ended questions to learn more about your consumer, and keep them coming back to your social media by giving them consistently fresh content.

Airbnb was founded just five years ago. That’s amazing considering the accommodation marketplace has served more than 11 million guests. Whether you’re looking for a loft in London, a farmhouse in Tuscany or a high-rise apartment in the Big Apple, Airbnb can help you discover it. And if you’re looking to make good use of your extra space and earn cash while doing so, listing your pad is a cinch.

Airbnb enjoys enormous success because it fills a niche in the accommodation industry, but it also rocks social media.

Here are some insights on their tactics.

Through Google+, Facebook, Twitter and YouTube, the brand offers travelers and hosts tips, asks fun questions that beg you to chime in, and keeps you current on Airbnb events.

But what’s particularly impressive about Airbnb’s social media strategy is how each outlet strongly encourages users to share their Airbnb Stories, and in doing so has created an authentic community that generates a sense of camaraderie.

Takeaway: Your current customers are your best source of advertising. They want to tell the world how great your product or service is. Set up your social media so they can!

It’s hard to believe, but it’s true. Even TurboTax is taking advantage of social media, and its approach proves that how you treat unhappy customers says a lot about your approach to customer satisfaction. 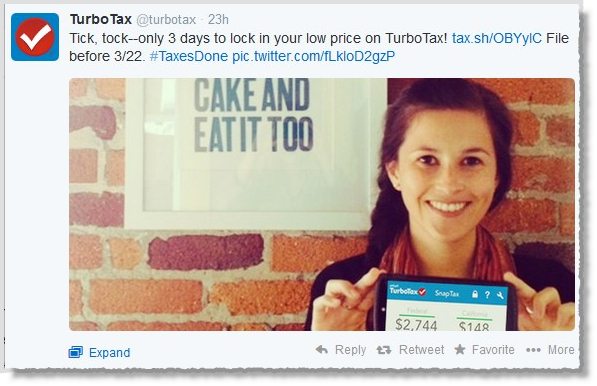 TurboTax offers users a variety of ways to engage, including through Facebook, Twitter, Pinterest, and YouTube. As you might imagine, because the company deals with the most dreaded of things (taxes), a handful of disgruntled customers use the company’s social media to vent their dissatisfaction.

Instead of ignoring the negative vibes, TurboTax addresses every concern. In doing so, its credibility skyrockets, because the fact is, we’re all going to be disappointed now and then. When we are, we want to know someone cares.

Takeaway: When (not if) the time comes that your company receives a less than complimentary social shout-out, don’t ignore it. Address the problem so the world knows you take customer service seriously. In doing so you’ll score major consumer happiness points.   Our six featured brands are using social media in different ways, but all are achieving their goals. And you can too. Use our helpful takeaway tips and get started today.