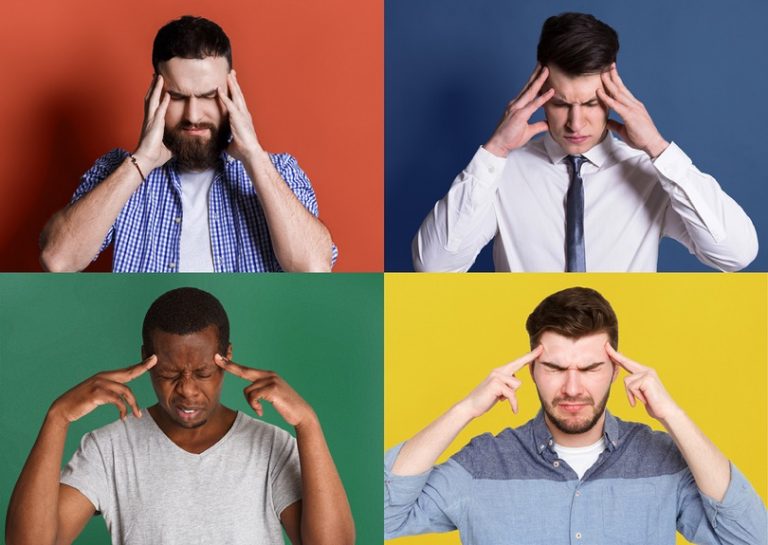 Fake is the new currency of the web.

Seriously! The fake factor has kidnapped the online world to the point that it has nearly paralyzed the digital ad world. In fact, according to Juniper research, ad fraud costs $51 million per day. And it’s the fraudulent advertising agencies that are partially to be blamed as they are ones who sell ad spaces on fraud sites and then get ad-bots on board to drive fake traffic to these sites.

If John Wanamaker were alive today, the merchant who gave the world the oft-repeated quote,

“Half the money I spend on advertising is wasted; the trouble is I don’t know which half, ”

I am sure he could have easily put his finger on the problem and slashed the digital marketing budget drastically as few of America’s leading FMCG companies have already done.

Yes, fed up with fakes, America’s leading FMCG companies, such as Procter & Gamble, have slashed their digital marketing budget by half.

When America’s largest advertiser Procter & Gamble had enough and more going on its fake end, the company slashed its digital marketing budget, which ran to the tune of US$140m in April-June 2017, to half. According to the company’s chief financial officer Jon R. Moeller, it was cut where it was “ineffective”.

Obviously, the company knew which half of its advertising cost was a sheer waste and addressed the issue sooner rather than later.

It goes without saying that this fraudulent practice has left several business heavyweights second guessing considering the kind of money they were putting out just to reach prospective clients.

Blockchain technology has the answer

This brings in ultimate transparency to the digital ad supply chain.  For more info check out this video:

As it turns out, blockchain technology is ingeniously designed to figure out fake ads via its shared database system.

And helping blockchain in this noble cause are various blockchain-based solutions such as Adchain.

Here’s how Adchain ensures that ads in the value chain are real and not fake:

When an advertiser or a company buys an ad impression through real-time platforms such as demand-side platforms or DSP. The DSP’s job, in turn, is to find target audiences through ad exchanges that pool in ad inventory from tens of thousands of online publishers.

So far so good.

Now, Adchain enters the scene by adding a tracking beacon to ads to verify whether they have been viewed by real or fake users on the publisher sites. 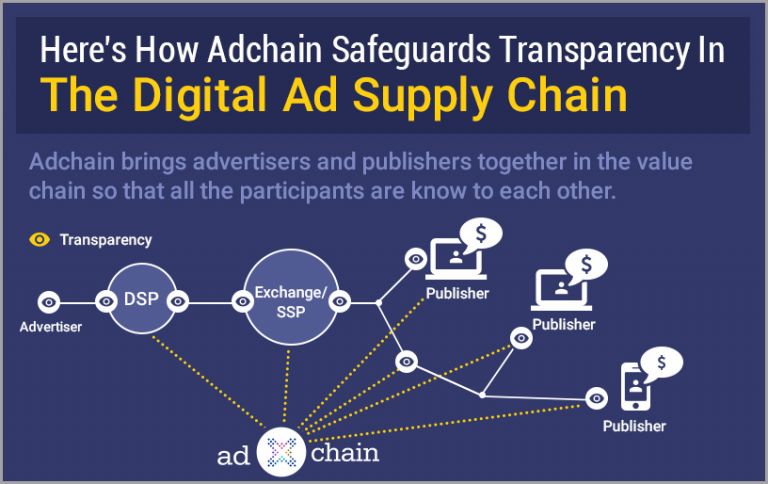 The ads or impressions are then encrypted and broadcast to each participating member in the blockchain that approves the impressions. The block is added to the permanent ledger, which is immutable (unaltered) and the impressions verified and cleared. 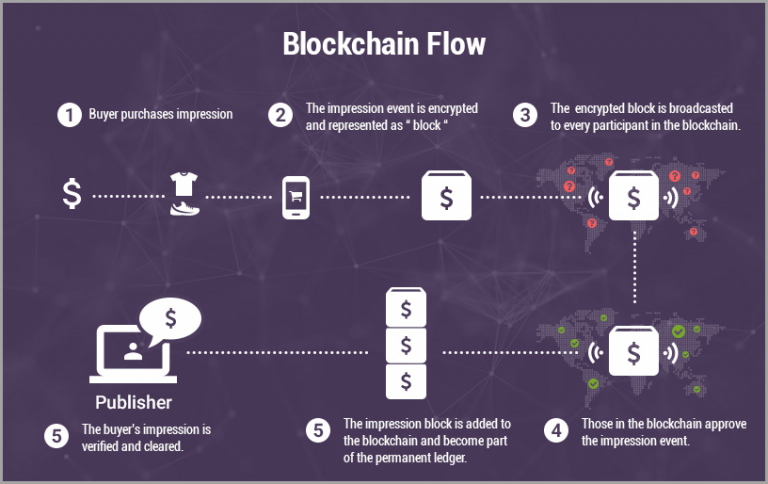 The shared database also ensures that advertisers have a clear-cut idea about the actual ad space available on the publisher sites, while they indulge in real-time bidding.

Further, Adchain keeps an eye on the entire digital ad supply chain for clicks, geographic location, purchases and audience segmentation. Which means you will have a single source of truth for everything related to the ad impressions. 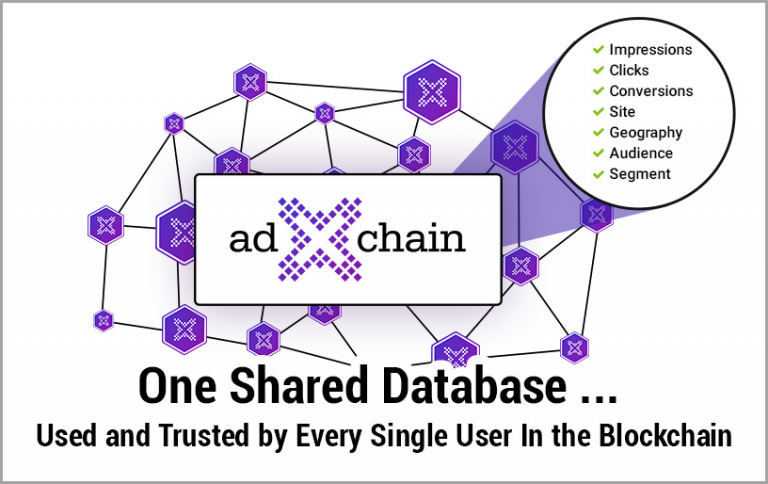 #2. Direct dealing with advertisers and publishers

For this, both parties charge a huge pound of flesh from advertisers.

This is where blockchain steps in.

Blockchain technology not only connects advertisers with the publishers, it also makes sure that users are genuine and that the publisher charges the advertising company only for genuine clicks. 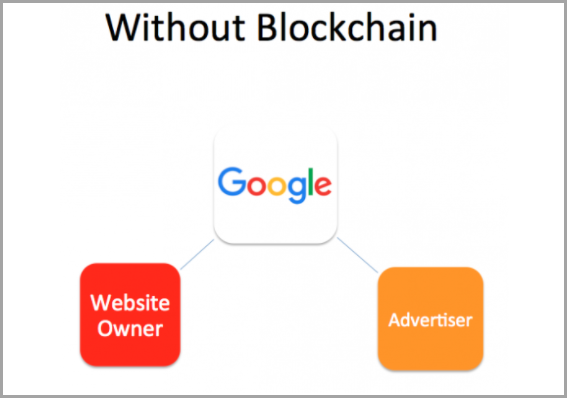 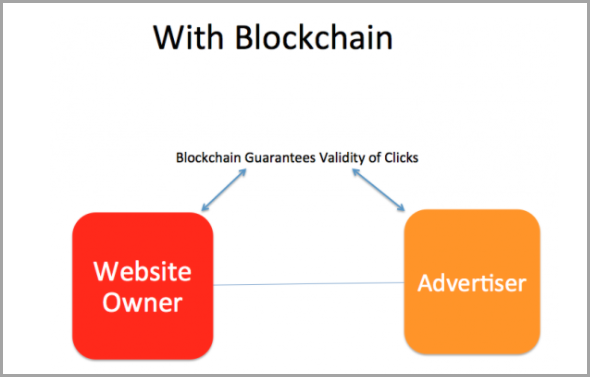 Unlike earlier times, users interest in different social media accounts has taken a massive beating. Users with a single account are the new norm. While some have given up on their social media world completely because it’s affecting their psychological well-being, some have grown sulky and disappointed with the fact that the benefit of their work was being passed onto the site more than them.

If this wasn’t enough, user data, which is meant to be confidential, is being made available in the open market, with governments, advertising companies and more having access to it. This has made users apprehensive while sharing personal details of their lives.

In short, social media is losing its edge.

And the two companies leading the way in the blockchain social media realm are Nexus and Synereo. They have gauged the potential and are leading the way.

Through Nexus, a social media platform, you can post information, send private messages, create public transactions, sales, and crowdfunding, all through the blockchain.

Further, you can use its cryptocurrency Social to purchase goods and services within the platform. Nexus has linked the Social coin to a debit card allowing users to spend their social as currency (dollars, pounds, euros) anywhere Visa is offered.

Synereo, on the other hand, helps you monetize content on social media. The company has produced a money-minting system called, WildSpark, which uses blockchain technology to pay its users. Even Synereo, just like Nexus, has created a cryptocurrency called AMP to be used by content curators and creators to distribute content and receive payment.

So unlike the traditional social media platforms that absorb all the money, AMPs make it possible for users to earn money for creating and sharing content.

But then, the quirkiness of this situation shouldn’t stop marketers from early adoption of this technology given that it offers marketers advantages in the form of transparency, security, and performance.

To cut to the chase, this is why early adoption of blockchain could make all the difference.

Guest author: Jennifer Warren is the resident wordsmith with GoodFirms – a review and research platform for top blockchain development companies, digital marketing companies, among many others. She has successfully guest blogged on top sites such as Crazy Egg, SEMrush, Searchenginepeople, Sitepronews, Volusion.com and more. For more, kindly check out her Linkedin profile.