How To Use Cognitive Biases For More Effective Marketing 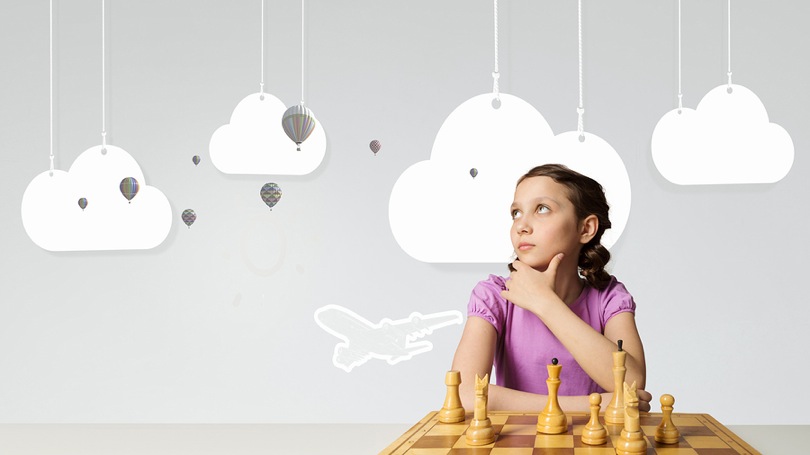 Did you know that adding a strawberry to the top of a cake can make people think that it has fewer calories than it actually does?

As consumers, we desperately want to believe that we have freedom of choice and the ability to make informed decisions. However, this is rarely, if ever, the case.

Despite all the amazing things the human brain can do, it does have bugs and glitches that prevent it from behaving rationally. Psychologists like to call these flaws ‘cognitive biases’.

Cognitive biases are defined by Wikipedia as ‘the systematic pattern of deviation from norm or rationality in judgement, whereby inferences about other people and situations may be drawn in an illogical fashion’.

These biases open the gateway to a plethora of modern-day techniques that marketers can use to seemingly Jedi mind-trick consumers into spending money.

Here are a few cognitive bias techniques that you should consider applying in your own business.

1. Give them a gift and they’ll buy something later

As a business, when you give away something for free to your customers, you never actually give it away for nothing. Rather, you get something far more valuable back in return, and that something is the advantage of reciprocity.

The concept behind what was formally known as the Principle of Reciprocity is quite intuitive. In fact, I’m sure you’ve experienced it before. It’s basically the human urge to want to give something back in return for having received something to begin with.

Another emotion that is closely tied to reciprocity is guilt. We have an urge to give something back not only because we want to, but because we don’t want to feel indebted to others.

Take, for example, the feeling you get when a friend buys you an unexpected Christmas gift. Surely, your kindhearted self would naturally want to return the gesture and buy them a gift too. Part of this feeling is due to not wanting to endure the guilt that would arise if you choose not to give them a gift in return.

Though this concept has been around for ages, it was popularized by Dr. Robert Cialdini in his iconic book, Influence: The Psychology of Persuasion. To showcase the principle of reciprocity, Cialdini shared a study in which he saw that a waiter’s tips increased by 3% whenever diners were given a free mint. And when they were given two free mints, their tips shot up by 14%.

However, applying the Principle of Reciprocity to your business doesn’t mean you simply go around giving away free stuff. For maximum effectiveness, here are some key points to consider:

2. Take them on an emotional rollercoaster

People feel first, and think second. Studies have shown that consumers focus on emotions as opposed to facts when making brand decisions. An analysis of over 1,400 case studies has also found that campaigns with purely emotional content perform almost twice as well (31% vs. 16%) as those with purely factual content.

Evoking emotion should be a vital element of your marketing efforts, and successful storytelling is a great way of achieving this effect. Here’s a Nike video that springs to mind (it’s their most popular video on YouTube by far):

Nike does an excellent job here in not only telling a compelling two-and-a-half minute short story, but also conveying a rollercoaster of emotions that range from humor to surprise to inspiration.

Before you start thinking that you need a budget like Nike’s to create an emotionally triggering video, here’s another great video created on a much smaller budget by Sevenly.

Notice how the tone completely alters partway through the video. It starts off with an almost ominous vibe as it presents the problem at hand. Then, as the narrative begins to describe the solution to that problem, the mood suddenly shifts to a far more inspiring tone. This sudden switch is a great way of making customers emotionally engaged.

There are many different pricing techniques that you can use to get your customer’s brain to think in the way you want it to.

Let’s first look at what is known as the Decoy Pricing Model Technique. This technique was famously used by The Economist to price their magazine subscription packages. They offered three options:

Can you see the absurdity taking place here? Which subscription would you go with?

If your thought process was what The Economist predicted it to be, you would have gone with the last option thinking that you’d be getting the online subscription for free – a bargain deal, right?

Well, that’s just what The Economist wanted you to believe. Of course, there’s a reason behind their pricing madness. They were using the middle option as a reference point, or ‘decoy’, to show what a great deal the third option is.

So how effective was their pricing strategy? Dan Airley wondered the same thing and conducted a study with 100 MIT students to find out. In a TED talk, Dan described how he had given these students the same exact three pricing options and found that 84% of them wanted the online + print subscription. 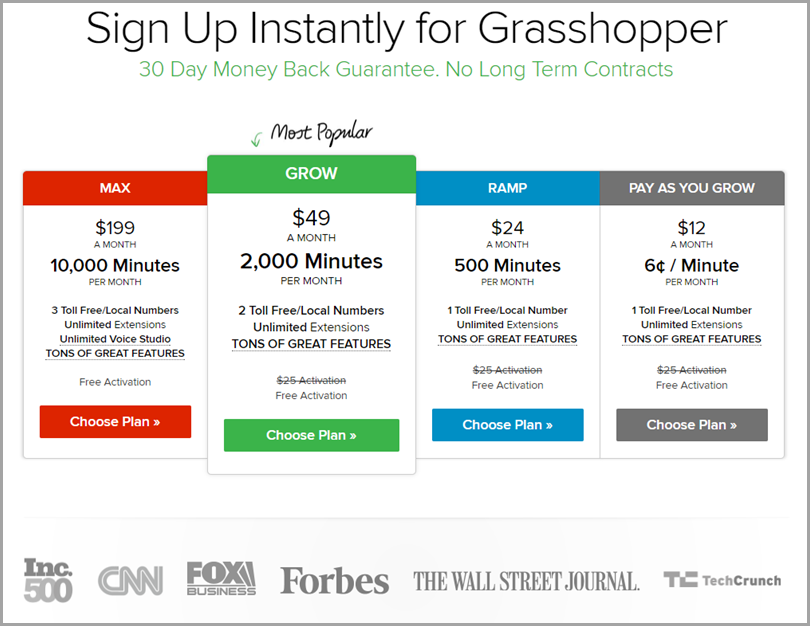 In this model, Grasshopper is trying to use the MAX plan as a decoy to make its other options, particularly the GROW plan, look more appealing. Without this decoy, the GROW plan suddenly seems rather expensive compared to the cheaper options. This is because we, as consumers, would focus on the fact that it’s twice as expensive as the RAMP plan.

However, with the inclusion of the MAX plan, a far more expensive option that most companies probably wouldn’t need anyway, our attention instead hones in on how the MAX plan is four times as expensive as the GROW plan. This makes the latter seem like a great deal in comparison.

Here’s are a few more tricks that Grasshopper is using on their pricing page.

If you can harness the power of these marketing tactics and take advantage of how the human brain works, you’ll be able to subconsciously influence your customers’ decision-making process and skyrocket your sales in the process.

Don’t feel bad about it either – just remember that the same tactics are also being used on you! What a world we live in!

Guest Author: Peter Yang is the co-founder of ResumeGo, an online business that offers professional resume writing services. He works tirelessly every day to develop new marketing strategies for his company and coordinate the resume writers and career coaches who help professionals get their ideal jobs. With over two decades of experience, he’s worked in marketing and HR for companies such as Hewlett-Packard and IBM. He has an unrelenting passion for writing and loves to share his knowledge of marketing and entrepreneurship with others.