The rules of marketing are changing. Before the rise of the social web, marketing was about synchronous messaging. 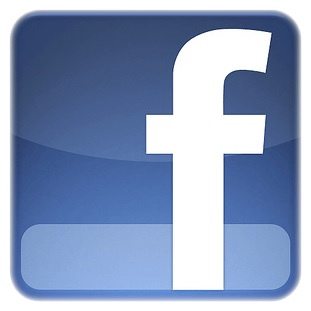 It was about shouting your brand from the roof tops in a one way conversation.

The louder you shouted (the more dollars you spent on mass media) the more money you made.

In essence it was simple.

Today it is a two way conversation with a variety of multimedia on a multitude of global social networks, that starts with engaging the customer with content that involves interaction of some type and then selling the product or service.

In the past engagement was very hard to measure because media was a one way conversation whether that was television, radio  or print.

Today you can instantly see in real time if the content you publish or marketing message you promote is working as you view people liking, sharing or commenting online on Facebook, Twitter or YouTube.

Facebook has made the first engagement easy to spot as the ubiquitous “like” being the first indication of your brands touch point and resonance with a fan.

After that the relationship becomes deeper as content is shared with friends and comments are left on the Timeline. The more time and effort displayed by the prospect indicates the building and budding relationship.

Facebook has recently  changed the way  brands interacted with their fans online by totally revamping the new user interface for Facebook and renamed it “Timeline”.

It provides a larger canvas for photos and images and a larger cover photo to showcase a businesses brand along with many other features and functions.

When the timeline was announced, the screaming of users and brands was deafening as they had to rebuild their Facebook marketing strategies and learn to navigate the new user interface.

Generally no one likes change!

A new study by Sotrender (an online tool for analysis, reporting and optimisation of Facebook), provides some interesting clues as to whether the new Facebook Timeline is working well for business and brands.

None of the following metrics changed significantly in the after-Timeline period:

They discovered that two things had changed significantly.

The study by Sotrender discovered these two statistically significant changes.

Before the timeline’s introduction, users made half of their comments in less than one hour. Now the posts half life has extended to 2 hours and 30 minutes.

Also 80% of all comments are made in 8 hours and 30 minutes (2 hours more than before Timeline.) 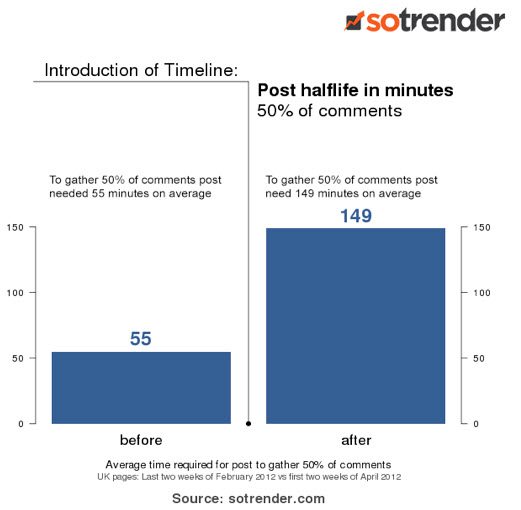 If company writes too often, the new posts may cannibalize users engagement of the previous ones.

The other change that was noticeable was that the Facebook timeline has increased growth in post engagement by 13%.

Prior to Timeline the average post stimulated the activity of 158 fans. This has now increased to 179. 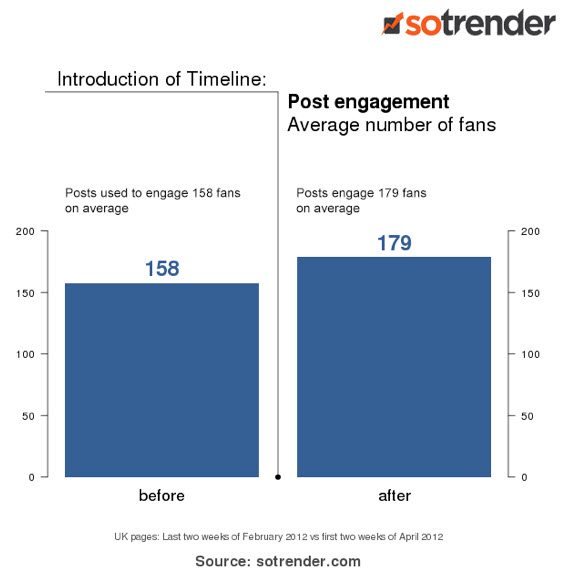 Have you found the new Timeline increasing or decreasing engagement on your Facebook page?

Have you changed how often you update your business Facebook page?

How have you adapted to the changes?