Don’t Turn Off The Internet We Have A Revolution

One reader commented that in my recent post about our social [media] revolution in the Cloud, I didn’t mention Egypt, Libya, etc. etc. or any of the other populaces who are using their knowledge of new media as a powerful weapon in democracy. 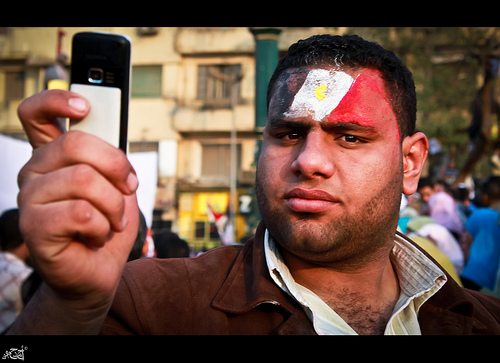 It seems a long time ago now, but I was once a linguist in the U.S. Army.  Russian.  The Cold War.  One of my potential jobs would be ‘psychological operations’ and also involved Airborne training, so I could more readily distribute fliers and pamphlets.  Propaganda is a popular device, and something to be wary of, yet we find ourselves awash in it continuously: from governments to corporations to teachers and parents who decide (often based on so-called expert opinion) what is right and good for everyone.  Or at least, in line with their own agendas for you.  I also lived in Chile under Pinochet in the late 1980s… one state-run tv channel and only an old-fashioned two-way radio patched through to landline phones for communication back home.  Information is life-blood to me, as a node in the network, so much so that I literally feel like a limb is cut off when I am denied access for too long.

Information as a Mechanism for Social Transformation

There is a long history of using information as a mechanism for social transformation.  Margaret Sanger, who founded Planned Parenthood, fought epic battles with the American postal service for the crime of distributing information pamphlets helping women understand birth control options, particularly the new-fangled French diaphragms (she later married a mega millionaire and hired a scientist to make her the magic ‘pill’ that we now take so for granted).  World War II was a major information war, before we had memes to understand it at all.  Telegraph, radio and telephone services had been flourishing for some time.  The Nazis targeted intellectuals of many persuasions, sometimes singling them out based on the eye-glasses they wore to assist with their myopia (itself an adaptation that is selected for in families that read a lot).  The Japanese had their own radio station blasting the South Pacific (Tokyo Rose) with their distorted claims and barely disguised imperialist agenda.  Voice of America responded with its own conversations, and continues to be a major force in communicating democratic possibilities (at least our variety), even now. The Soviet Union fell because of Mikhail Gorbachev’s reforms.  Glasnost (open-ness) and perestroika(transformation) edicts were issued as a way to pull the Soviet Union our from behind the iron curtain that kept it economically and culturally stultified for so long.  The burden of knowledge and ramifications of transparency were too much for the early 20th century has-beens (the ‘Communist’ revolution in Russia occurred in 1917).

Here is my larger point.  Social media revolutions are beautiful and amazing.  However there is no hope for such capability in countries in which the powers-that-be limit access, deny education and have access to the backbones that enable connectivity across our globe.  Sometimes a tweet from a cell phone is a small whimper that leads to action.  Sometimes our news media draws attention to these events.  But too often voices reach out to nothing but windows and doors shut, and denial in every whisper.

The greatest social media revolution will be when we discover how fundamentally we are already linked as human beings, and when we have the tools that allow for the forging and maintenance of such connections.  We also need to ensure that a world-wide communication grid exists, one that is not only controlled by corporate and government interests.  Certainly we can’t allow the kind of nepotism for Internet traffic that the Net Neutrality folks propose.  Just yesterday, Secretary of State Hilary Clinton took the previously-unheard-of position that American news sucks, and Al Jazeera is ‘real news’.  I applaud her courage to shine such a light of truth into the dismal, unimaginative universe of control, brainwash, sell to, and conquer.  Not a value judgement… it’s just very limiting of our potential.

Human Rights is a Journey of Continuous Improvement in Information

Despite these continued challenges, achieving human rights is a journey of continuous improvement.  Things are getting better, despite the less-than-cheery news we sometimes hear.  News about the Libyan government turning off the Internet, about our own political parties using rhetoric and information as weapons against their own people.  About misinformation in a million and one guises, and an evolving survival mechanism that involves being able to separate fact from fiction, wheat from chaff, reality vs BS, information that might kill me (think bad medical advice), vs information that might aid me in a crisis (how to build a portable toilet when your city is liquefacted).

But the thing that is most important in all of this is that information revolutions require the knowledge to use those tools effectively.  Information literacy has become the digital divide presaged a decade or more ago.  It’s not about access to hardware… it’s about knowing what to do with it.  About understanding the voice it can give us, and the connections and possibilities we can find as a result.  Somehow, miraculously, despite incredible oppression in some places, a huge generation of people have internalized digital capability so fully that it has become THE tool for peaceful change.  This is a very good thing.  So much better to resolve our conflicts in the worlds of words and ideas (or videogames, but that’s another topic) than through conflict and aggression.  We must be patient, though, because changing minds takes time.

‘You can’t stop the signal’ is the truth in our ‘verse, and it’s a lovely evolution of humanity.  Let’s just make sure those info streams are never cut off, even if we don’t like the content within them.