Start Your Online Side Hustle
click here
Home » Blog » How Do The Top 10 Famous ‘Sports Star’ Brands On Facebook Optimize Their Page?

I am speaking at the Sportcal.com “20 Years in Sport” conference on May 11 in London and one of the areas to be discussed will be the relevance of social media to sport. 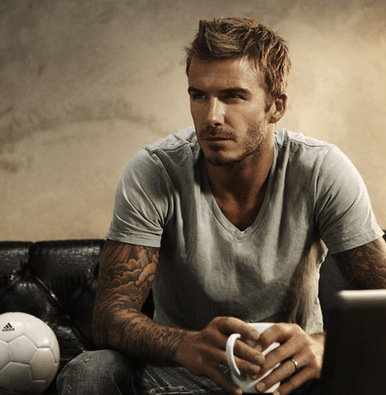 A good place to start that discussion and to provide some context is to have a look at Facebook and how the ‘Top 10’ sports stars and brands on the ‘Top 100’ Facebook pages are using the social web.

(To be totally honest in fact there aren’t 10 ‘Sports Star’ brands in the top 100 as Adidas Originals sits just outside the top 100 at position 103 on Facebook’s global page rankings..but I will sneak them in)

The 4 Sports Brands Categories in the Top 10

What is interesting is that the one sport represented in the top 10 has in fact nothing to do with a commercial interest (the Facebook page has not been created by a company or sporting star). What is refreshing about this anomaly is that it is all to do about the passion of the sports fans who sustain and drive its popularity independent of any money making venture (which I think says a lot about the power of social media as a people’s media and the democratization of the ‘new’ media’).

Traditional mass media such as television, cable (Subscription TV) and radio have brought serious money to the table for sports stars and companies associated with sport over the last 20 years with sports broadcasting rights selling for billions of dollars. Social media is the ‘New Media’ kid on the block that a lot of brands and sports stars are struggling with as to how they use it to monetise and leverage their online and offline brand.

So What is the Relevance of Social Media to Sport?

Twitter allows a sports stars tweets to hit the web instantly via  laptops, mobile phones and iPads while they are on the team bus, in the locker room or at a restaurant. In fact in a recent study by Dan Zarella the ‘social media scientist’ showed that 33% of Facebook updates are from a mobile phone which provides the platform for real time news to hit Facebook while on the go.

Mass media has editors and sub-editors which protect the grammar (and attempt to protect the ‘brand’) but remove the humanity, honesty and the transparency that social media brings. Fans love this as it gives insights to the lives of sports stars that previously was not possible

Google and Twitter have added a new dimension to media that didn’t exist before. If you are looking for a story about your favorite sports star you can search for it and find it in seconds rather than waiting for the news at 6.

Traditional mass media does provide leverage and amplification of your message but it is only one to many. Social media’s strength is with its ‘World of Mouth’ that is one to many and many to many. Social media provides high leverage and low friction brand messages and ideas to spread quickly and effortlessly globally. The latest news about a sports star is quickly spread from Facebook friend to Facebook friend and then continues to spread as it is published to Twitter and YouTube.

Once a news story is on TV  it is archived and often never to be seen again. Last weeks newspaper is lining the bin. If you want to read more about your favorite sports star or brand you can go to their Facebook page, YouTube Channel or check Twitter for their tweets. Google indexes and files the social web for all to view tomorrow and next year. The longevity is not just in the ability to find it on Google or Facebook or Twitter next year but also the fact that it never sleeps and it operates 24/7  and it promotes the brand while the marketers are sleeping.

So Who are the Top 10 “Sports Star Brands” On Facebook?

Cristiano the football mega-star with 25 million fans and reported earnings of over $16.5 million per year who plays for the Spanish football team Real Madrid with a Global Facebook fan page ranking of 14, is the the premium sports brand on Facebook . Nike knows that and have taken a  prominent ‘landing page’ position with a promotion titled “Who Is Superfly?” which is a new brand of Nike football boot. Cristiano’s marketing brand minders understand the power of multiple social media channels with button and links including Twitter, YouTube and Mobile (which links to a Cristiano iPhone app where you can play as ‘Cristiano’) 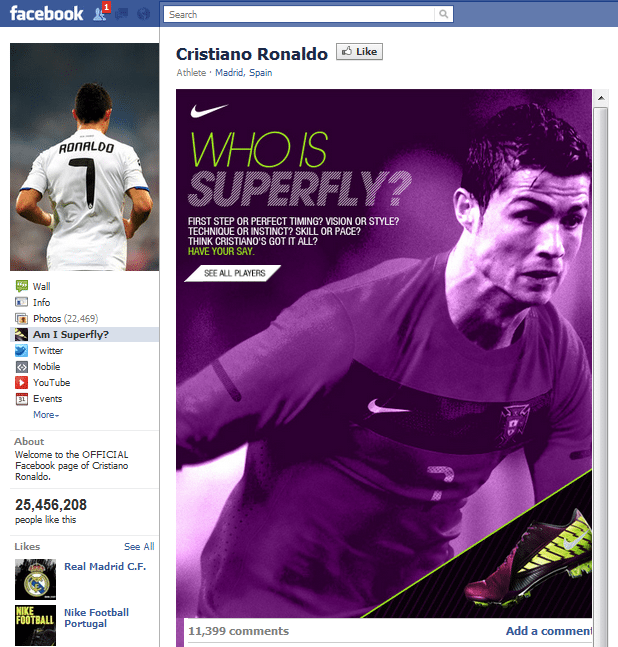 This brand founded in 1908 uses its Facebook page to engage with its audience by offering free song downloads. It does offer videos but no links to Twitter or YouTube. I think they missed an opportunity for more Facebook ‘likes’ by offering 15 Free songs without a ‘like’ condition 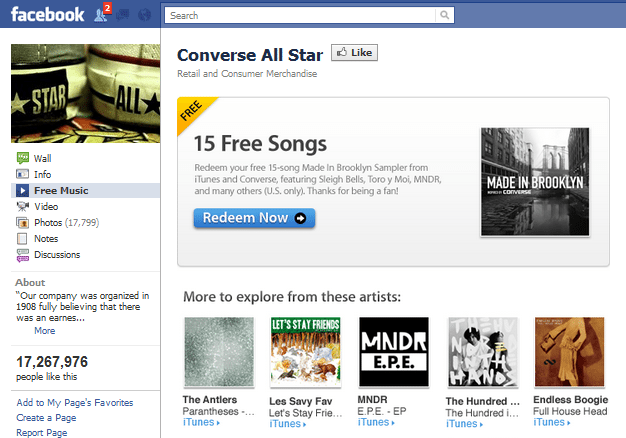 In fact if you added ‘Converse All Star’ to’Converse’  they would rank as the largest sports brand on Facebook and come in at a Facebook rank of 4th.

Their page is the same as ‘Converse All Star’… next.. nothing to see here!

The FC Barcelona Football club realizes that their Facebook page is a great way to spread their brand and openly encourage you ‘liking’ their page, include a link to their YouTube channel and provide social shopping by having an e-Catalogue (online store) capability. There is no Twitter link though I am sure they have a Twitter account. 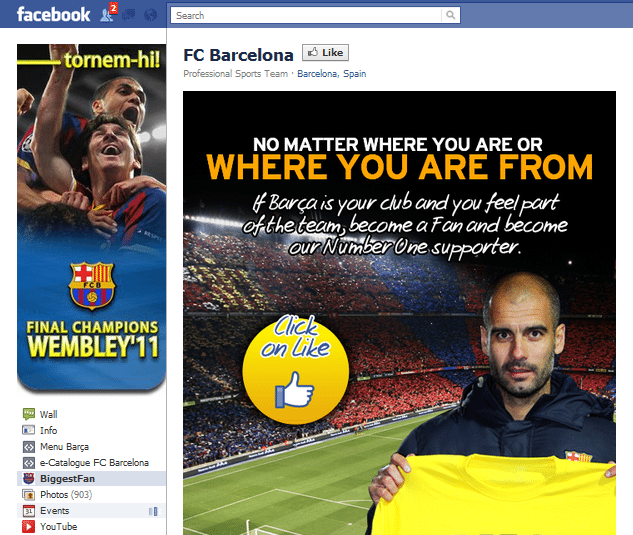 This Facebook page a is a little more aggressive in its Fan acquisition tactics with you being able to invite 16 of your friends from the landing page tab. No YouTube channel link or a Twitter button 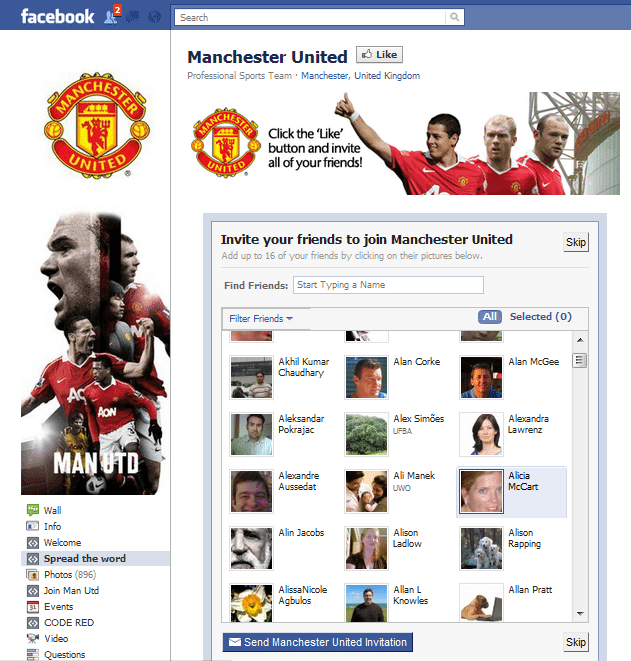 Real Madrid offer a large range of activities from their Facebook page including. Fantasy game, Avatars, Online Store, Poll and a YouTube channel button. Again obtaining a ‘like’ is in your face and very prominent. 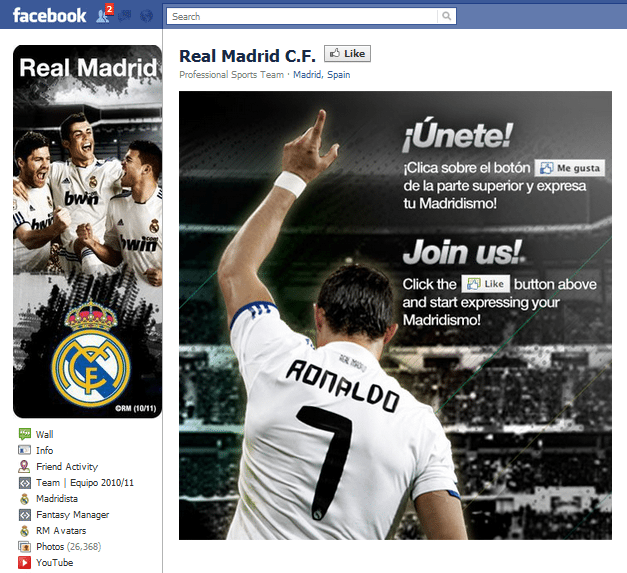 Michael has dropped the ball here but maybe he is playing golf! .. and who would blame him. Not much happening on this page. 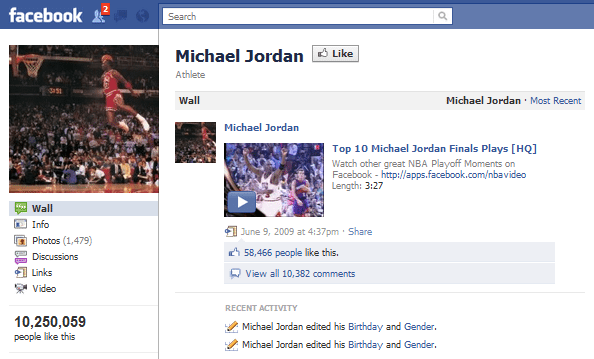 David has gone off to play in the USA but manages to fit in a few football games amongst being a fashion brand almost in his own right. Is reputed to be one of the top earning football stars earning up to $40 million a year in salaries and sponsorships from Adidas, Motorola and also Armani, according to US magazine Forbes. Beckham’s Facebook page is not much to write about with no links or buttons to other social media or  even an encouragement to like his page. Maybe he is ‘likeable’ enough according to the ladies. 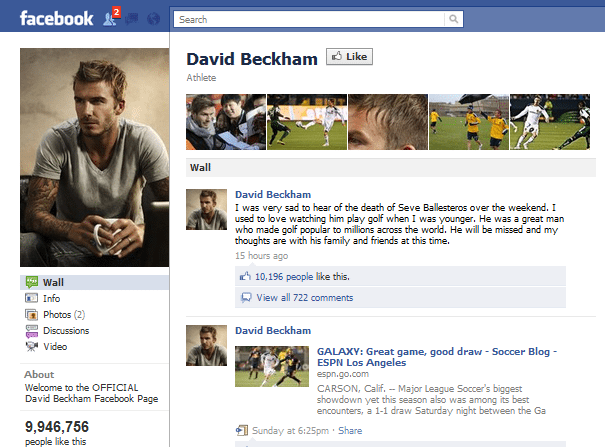 Passionate fans of the sport of basketball is why this is a top 100 page on Facebook nothing more, nothing less. This is a vanilla Facebook page pure and simple. I think Michael Jordan happened to sneak onto the front page of this Facebook site in his famous ‘Chicago Bulls’ uniform! 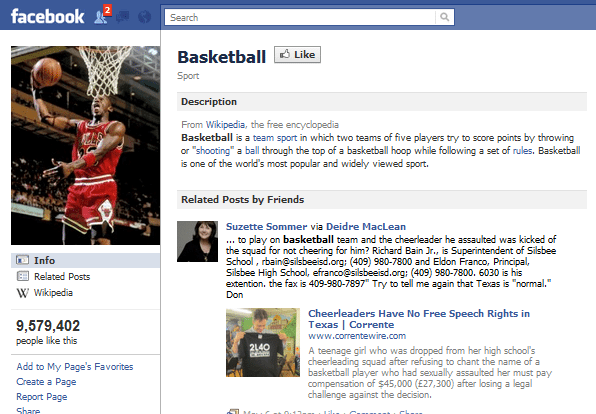 Quite a lot going on here with Game face, Live stream, YouTube button and channel, Artist collaboration and events to name a few. It is missing Twitter and a store which would add some conversations and dollars into the equation. 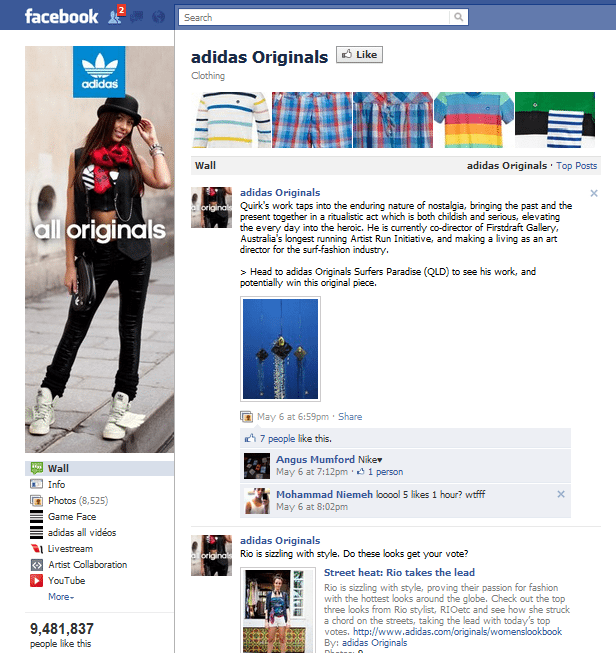 So  it appears that some of these brands are optimizing their Facebook pages while others are just showing up but I suppose that’s one of the benefits of being “Famous”!