To date, Microsoft has amassed 463,353 followers on Facebook – and that’s only counting their main company page, not the separate pages they have dedicated to their products and services including Windows, Windows Phone, Bing, Office, Internet Explorer and Xbox. There’s little doubt that Microsoft has achieved additional success by using Facebook as a social media marketing platform. But is it the best social platform for your company? This depends on your goals, your traffic-handling capabilities, your audience and your resources. There are many social platforms to choose from aside from Facebook, including: 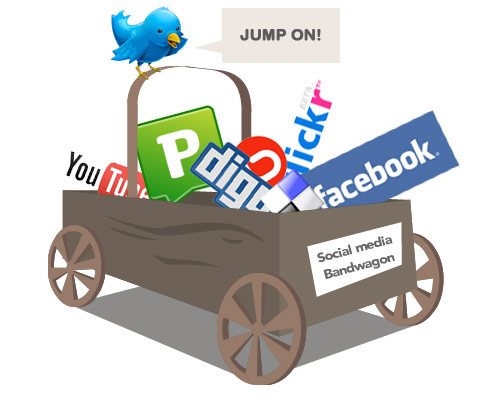 …and it’s possible, sometimes even preferable, to choose more than one.

What Exactly Are You Trying to Achieve?

Before dedicating your resources to a social platform, it’s important to define some goals. Your company’s goal might be:

Of course, you might want to achieve all of these things, which consequently work hand in hand: a viral marketing campaign can lead to more inbound links, which subsequently leads to more traffic for your site and ultimately to more sales.

A typical scenario might look like this: Your company produces a viral marketing campaign with clever, humorous YouTube videos designed to subtly advertise your products or services. The goal? More inbound links, more traffic and more sales. This is exactly what Levi’s did with their famous viral marketing campaign, in which they uploaded YouTube videos of people backflipping and leaping into a pair of jeans. Estimates indicate that this campaign reached out to nearly 100 million people, undoubtedly increasing denim sales for Levi’s.

How Much Traffic Can You Handle?

Different social media sites bring in different levels of traffic, and this can vary heavily according to your company’s niche. As of April 2010, Facebook was towering over other social media platforms in terms of total unique visitors, with 500 million as opposed to under 100 million for both Twitter and MySpace. In less than one year, however, Twitter has increased to 190 million users (nearly doubling) while Facebook now has 600 million users (20% growth). Of course, these are only raw user counts, and they don’t necessarily indicate how much of this traffic will actually see your company.

The traffic handling capabilities of your company’s site are important as well. Even the biggest news and entertainment sites can be bogged down by excessive traffic after breaking a big announcement, and your site is no different. A successful social media marketing campaign can generate a lot of traffic very quickly (Levi’s, for example, didn’t expect their YouTube campaign to be nearly as successful as it was), and investing in a robust business web hosting service can help to prepare your company’s site for massive amounts of traffic.

What Are the Daily Online Habits of Your Audience?

In 2010, Chitika (an online advertising network) conducted a study to determine where exit traffic ultimately ended up after leaving major social media sites. The results:

Although many of the categories have similar statistics, the study indicates that news sites are better served, to an overwhelming degree, by Twitter marketing, while How-To sites may gain a slight edge with a Facebook page. The exit traffic from MySpace, on the other hand, was primarily focused on celebrities/entertainment (23%) and video games (28%), with little interest in news. Other social media studies reveal important traffic information as well, such as the fact that 28% of adults in America say that they provide advice about buying products and services on social media sites, and that the Facebook community is predominantly female (albeit by a small margin).

How Many Resources Can You Spare?

Since most social platforms can be used free of charge, time is the primary resource to concern yourself with when choosing one. When creating a Facebook page for your company, for example, you must examine the individual time sinks:

The fourth time sink is optional because it largely depends on the size of your company. If you own a very large company with tens of thousands of fans, it may be acceptable to allow fans to post on your Wall without actually replying. Fans of smaller companies, however, generally expect a higher level of interaction.

On Twitter, a higher level of interaction is often expected of all companies. This can lead to an ongoing time sink: crafting thoughtful, meaningful tweets while adhering to the 140-character maximum post limit. Of course, the initial time investment with Twitter is smaller than with Facebook, since little more than a name and a brief bio will do. Twitter can require more ongoing maintenance overall, since your image on this social media platform is largely dictated by your tweets as opposed to a profile page.

You can greatly reduce the time required for social platform marketing by utilizing social media management tools. Some of the best include:

Spredfast or Google Analytics for metrics and analysis such as determining ROI and whether you’re reaching your target audience.

HootSuite for identifying followers and fans that are worth further engagement.

Regardless of the social platform you choose for your company, building a large group of followers will take time and patience. There are two exceptions:

1. Your company is so large and successful already that a social media presence is merely icing on the cake.

2. Your first attempt at a viral marketing campaign absolutely blows up, leaving you with more traffic than you can probably handle.

This can actually be dangerous if you don’t have the resources necessary to keep up with huge traffic and high demand for products and services.