side hustle
strategies
Thinking of starting a side hustle? CLICK HERE
Home » Blog » How to Get Followers on Twitter With Influencer Engagement 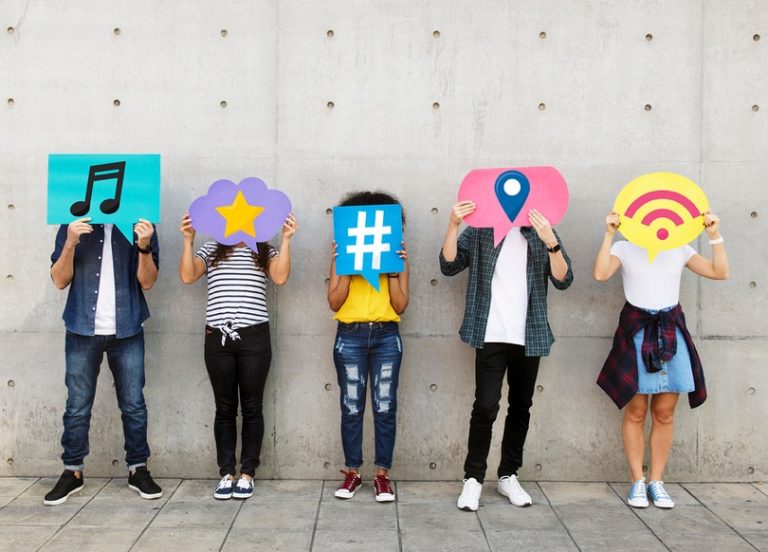 Getting more followers is pretty much Twitter’s Holy Grail for any small business. And getting relevant, engaged, valuable followers – even more difficult!

Influencers should be a part of that strategy.

Influencers bring a lot of benefits to your Twitter account. They provide essential social proof, extend the reach (and impact) of your Twitter messages and can provide fruitful input on your activities. Plus that follower growth thing we mentioned? They can help with that too.

Before we get started… isn’t follower count just a vanity metric?

It’s true that having a bunch of bots following you is not a great look. It’s also never a good idea buying Twitter followers just to bump up your numbers, as many small businesses do.

But getting more followers is still a valid Twitter objective. Follower number has a direct, measurable impact on your reach, impressions, and clicks. And follower count has a ripple effect because if your followers themselves have a lot of followers, your message is amplified. As Adweek puts it, what “really matters is this: how many people are the people who follow you following?” 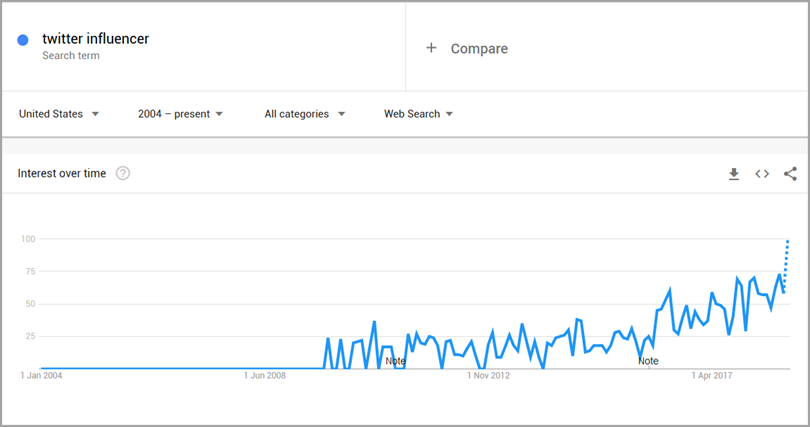 So it’s worth investing time in increasing your follower count to ensure you get the most out of Twitter.

Knowing which influencers to target is key to follower count success. You should be prioritizing influencers that are relevant for your objectives, and with whom you can build a mutually beneficial relationship. Influencer engagement isn’t a one-way street, so think about what you can do for the influencer as well as what they can do for you.

Although it might seem counter-intuitive, influencers with fewer followers might help you get more Twitter followers more effectively than those with millions of people following them. Micro-influencers – those with a following of around 10,000 – might not have a Kardashian level following, but the followers they do have show high levels of trust and engagement. Plus micro-influencers are more likely to respond to your advances and appreciate your efforts to connect with them. Someone like copywriter Kaleigh Moore, with just over 5000 followers, is a lot more likely to respond to you. 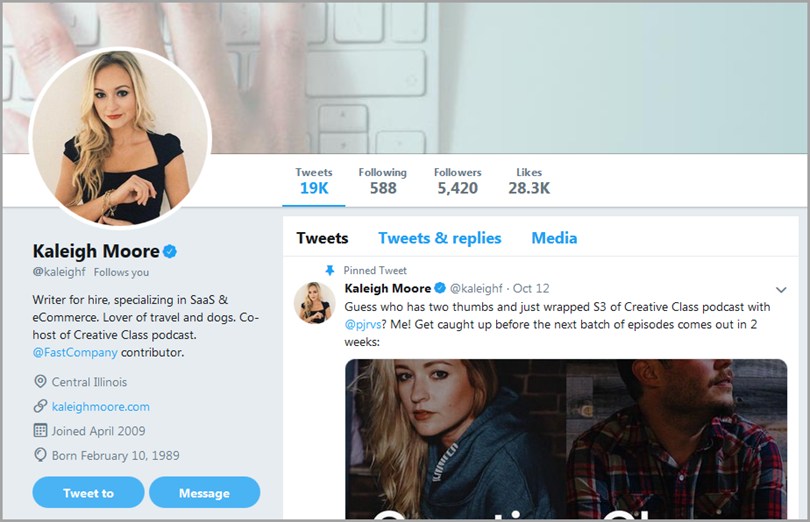 Once you’ve identified potential influencers, take a good long look at their previous tweets, their blog posts, and their followers before deciding to build a relationship with them. Relevance trumps raw follower count in many cases, so make sure your target influencers are firmly aligned with your brand.

You can also rely on technology to find interesting influencers. Social media management tools such Commun.it can identify potential influencers for you and help grow your relationship with them. You can connect with the influencer in the product interface, follow them or engage with their content. 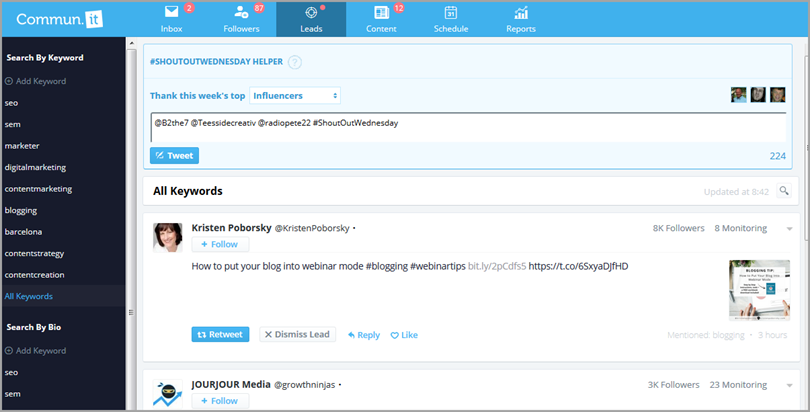 This speeds up the process of relationship building and ensures that you’re targeting the right kind of influencer for your community.

You might feel nervous about establishing a relationship with influencers – they have 10,000 followers, why would they want to hear from you?

Thing is, they do want to hear from you. People want human connections. Don’t be afraid to reach out to an influencer and be human – offer them encouragement, comment on the things they share, engage with their ideas. Offer something of value in return for all the work they put into being influencers. As the Twitter team advises, “spend some time building rapport to find out who they are and what motivates them.” That way you’ll have a higher rate of success when you approach them.

If you’re still nervous (or short on time), some social media tools automatically recommend daily interactions with specific influencers. Give them a #FollowFriday shout-out – it only takes one click and it could be the start of a great relationship.

And one last thing. Be sure not to take advantage of your influencers. They are a valuable personal and professional resource for you, don’t mistreat them. SEMrush has a whole series of free webinars that explain how to treat social media influencers with the respect they deserve.

How to get Twitter followers through influencer engagement – 3 actionable tips

Once you’ve identified relevant influencers and built meaningful relationships with them, you can focus on having them help grow your following.

Twitter lists offer a great opportunity for growing your Twitter following. Once you’ve identified a relevant influencer you want to engage with, go to their lists and follow everyone on there. You’ll definitely find new, exciting Twitter folks, and around 25% of the people you follow will follow you back, according to Blogtips. This is a nice quick way to start getting new, relevant Twitter followers fast.

Social media expert Donna Moritz is a great example of an influencer with a ton of useful lists. 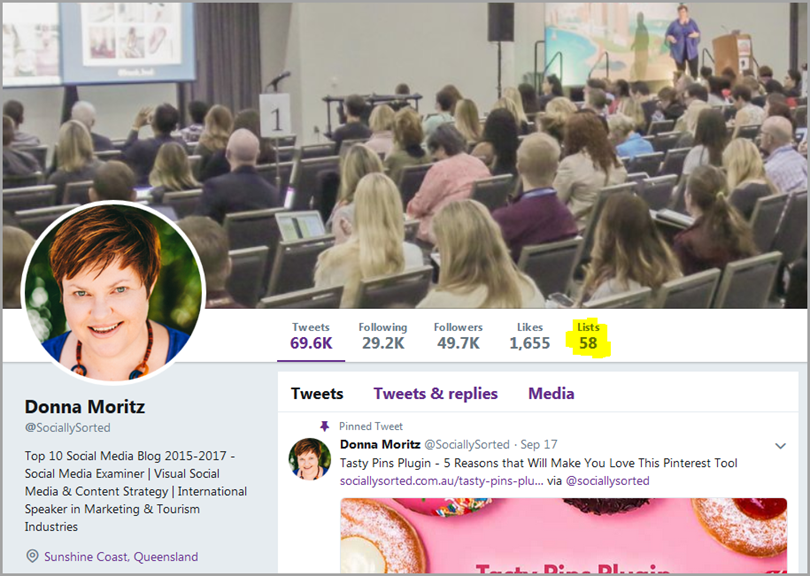 Then, create a private list and add everyone in the influencer’s list to it – don’t worry, they won’t be notified if the list is Private. When you go to this list view you’ll be able to see what these people are talking about on Twitter – now’s your chance to get in on the conversation! Share relevant content, answer questions or just give your two cents. If your interventions are valuable, you’ll get new followers.

You could also flatter your influencers a little by adding them to your public Twitter lists. Everyone likes to be appreciated, and by publically adding them to a list you’re tipping your hat to them as an authority. They may well be more open to helping you get more Twitter followers after this.

2. Ask influencers to promote you to their Twitter followers

If you’ve identified your influencer well, their followers will be very relevant to you and your business. So why not ask to be recommended to those followers in a tweet? A simple “Hey, you should definitely follow @YourProfile” from someone influential could get you dozens of new, relevant followers.

For this to work, you cannot automate the process. Don’t just tweet out to a bunch of influencers asking if anyone wants to recommend you. No one likes to feel like a number.

Consider taking the conversation off Twitter, in a mail or at least a DM. Back up your request for a shout-out with proof of your value for their following – the content you share, the commentary you provide, whatever your Twitter superpower is. You do have one, right??

3. Feature influencers on other platforms and ask them to Tweet about it

Top of funnel blog content is a great way to extend your Twitter reach via influencers. Start off by creating a simple list post of your top industry influencers, or the best industry quotes of the week on Twitter. Here’s a great example from Forbes.

Next, push this content back to your influencers and ask them to share it. To increase the chances of getting it shared, make it easy for the influencer. Try sending them template tweets complete with the content links and hashtags – the less hassle you give the influencer, the more likely they are to respond to your requests.

It’s highly likely you’ll gain some new followers and probably some blog traffic too! Twitter guru Mark Schaefer has a great case study on this.

How to get followers on Twitter with influencers – wrap

Getting new Twitter followers is never going to be easy. Creating an engaged, valuable community takes time and care, and building relationships with influencers is not a shortcut to a massive Twitter following.

But there are still ways to maximize influencer relationships to benefit your follower count. Using social media management tools to identify relevant influencers, building trust, asking for a promotion and cross-platform pollination can all convince influencers to help you get more followers. Give it a try!