Is Facebook Changing The Way We Read Our News?

How we continue to receive and consume our news continues to evolve and adapt to our changing technology habits and use of social media. I certainly have experienced this first hand when I heard the breaking news about the dumping of our Prime Minister via Twitter. 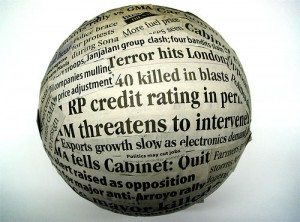 A recent survey of  Facebook users was conducted in July that reveals some fascinating trends and facts about how we hear about and consume our news online.

This survey was responded to by more than 40,000 Facebook users.

The major takeaway for me from this survey is that breaking news seems to be extremely well received via Facebook updates and that the role of Facebook and social media as an important distributor of news should not be taken lightly.

Also this survey potentially bodes well for services such as Paper.li, the Flipboard iPad app and TwitterTim.es, which create personalized news reading experiences based on the links your friends share. These services are popping up quickly on Twitter, and it probably won’t take very long for them to integrate links shared by your Facebook friends as well.

What social media channel do you hear about breaking news?