What are the 10 Top Social Networks for Marketing?

So you are the new marketing manager for an organisation with a 100 employees and you are planning your social media marketing strategy for the next 12 months. 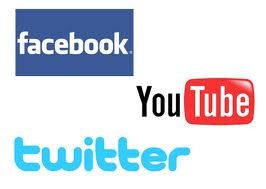 If you are a follow the crowd type of marketer and want to play it safe then the decision of which social media networks to deliver and spread the brand message is is not a tough call.

You will start with a list that will have Facebook at the top and you will work down from there.

If you are a bit more creative, like innovation and living dangerously and are an extreme sports fan then you may consider looking at mobile, apps, and locally targeted advertising strategies and tactics that are starting to make their presence felt as part of the marketing toolkit.

So if  you want to know where the rest of the marketing crowd have been playing for the last 12 months then here is some revealing research from emarketer.com that has some intriguing results at the bottom end of the scale

The Top 10 Social Networks for Marketing

Facebook was found to be used by 93% of marketers in companies with 100 employees or more and four key elements drive its high participation rate.

Twitter is still working out its business model and with only 140 million in ad revenue this year (Facebook’s is projected to exceed 2 billion this year) is still being used 78% of the time by the marketing manager. It is rumored that it will be rolling out a self serve ad function later this year that will make it much more efficient and cost effective to utilize. If the self serve feature is done well then Twitter could accelerate its revenue and value to marketers over the next 12 months.

YouTube ranks third in the survey at 61% but don’t expect this social media network channel to become a laggard over the next 6 months. One driver for this platform that wasn’t foreseen 12 months ago will be its closer integration into the new Google+ social network which has more than 25 million users. 20% of the marketers in the survey  also indicated they would begin campaigns next year on YouTube.

LinkedIn’s is a less public social network and can provide a great place to market higher value products and services that are more B2B focused ( Business to Business). At 44% nearly half of companies are using its platform to run an ad campaign in this survey

The rise of mobiles that are  GPS enabled  is slowly bringing back marketing options for local merchants that want to tempt buyers in the local area with alerts of offers to lure them into a struggling bricks and mortar retail sector. At 10 million registered users as at June 2011 it will need to keep an eye on Facebook’s “Places” feature as its closet competitor. Marketers are using Foursquare 16% of the time for their advertising. 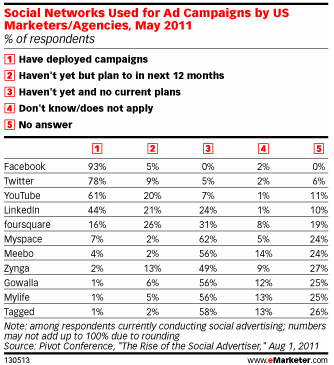 After having been sold recently for $30 million by the News corporation to a media company (News bought it several years ago for over  $500 million), MySpace is struggling but not quite down and out and I would expect to see it reinvented with its new owners.

It is finding some use for social advertisers at 7%

Meebo is a social platform connecting users with their friends across the web supporting a wide range of instant messaging platforms including Yahoo messenger, Windows Live Messenger and Facebook Chat. At a usage rate of 4% I wouldn’t be rushing to advertise on this channel

Zynga is the company behind the loved and hated Farmville and Texas holdem poker. The rise of social gaming has created a company that in a few short years is now reportedly valued at $15-20 billion and has 270 million monthly active users on Facebook. It is currently used by 2% of marketers but this may increase in the future as marketers work how to target their audience

Gowalla is a competitor to Foursquare and Facebook “Places” and with an estimated 600,000 active  users it will be interesting to watch how it competes in the location based social networking arena. 1% of marketers in the survey had advertised on Gowalla.

Mylife was started in 2002 (formerly reunion.com) as a social network service. It did claim to be the 6th largest networking site in 2007 with 28 million users but today according to Quantcast it has an estimated 4.2 million monthly unique users and is still the 7th largest social network in the US. Along with MyLife and Gowalla it attracted 1% of marketers attention.

The bottom five is where the numbers drop into the single digits. So the top five are as most people would have predicted and are generally the place to play if you want leverage, scale and a rapidly developing and vibrant ecosystems with many apps and contributors to their evolution.

Expect to see Google+ on this list next year but at what position will be the billion dollar question as it evolves and rolls out its social integration across all its platforms from mobile to mail and adds the highly anticipated Google+ for brands!