10 Top Brands with the Worst Google Plus Pages Google+ is one of the world’s most popular social networks. Many brands maintain an effective presence on the site, creating well-executed pages which drive conversation and increase revenue. However, this is not universal. Some brands have shockingly bad Google+ pages.

Here are 10 top brands with the worst Google plus pages.

Domino’s is the largest pizza chain worldwide, with over 9 million fans on Facebook and Twitter combined. However, this success doesn’t spread across all of their social media profiles. The content on their Google+ page is relatively good – previous posts include attractive photographs, information about new products, and special offers. 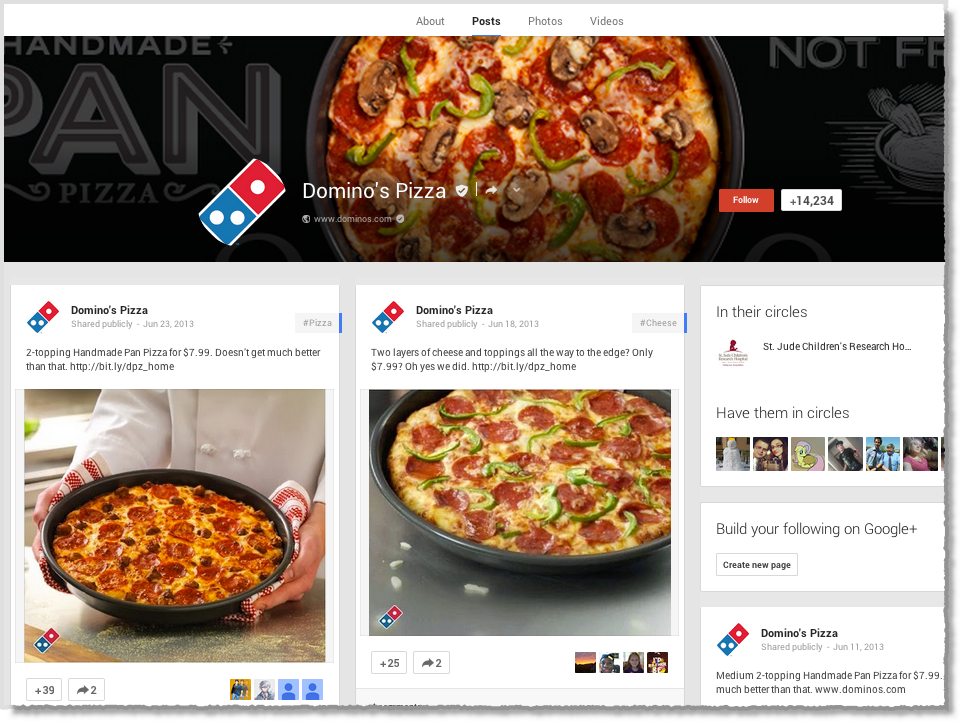 However, the posting is erratic and irregular. Months often pass between updates – the longest gap was an incredible 9 months between September 2012 and June 2013. This is excusable if a brand has been working on an incredible new product or partnership, but Domino’s updates are never particularly exciting.

McDonald’s is one of the world’s most famous brands. The golden arches, found in over 100 countries around the globe, are instantly recognisable. You would expect a company of such size and popularity to have a firm grasp of social media. 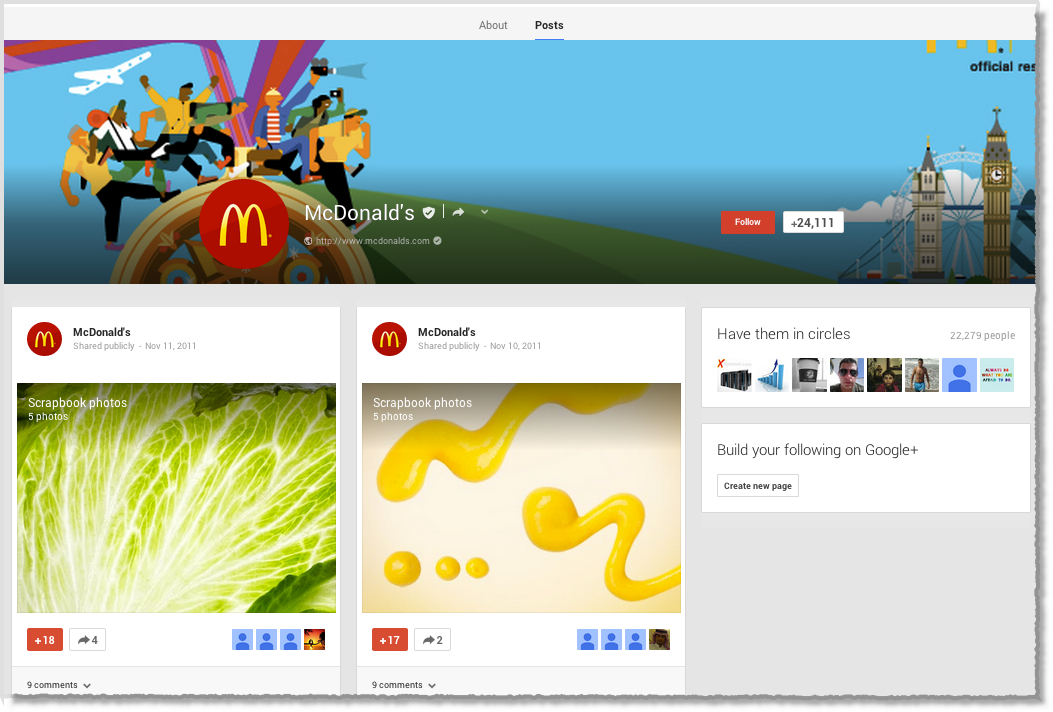 However, their Google+ page suggests otherwise. The pixelated cover image is poor and confusing, and visitors to the page are greeted with a paltry two posts from 2011 – consisting of random, unconnected images.

The Discovery Channel Google+ page has the potential to be excellent. There are endless opportunities for exciting content, such as behind-the-scenes footage, or interviews with experts. There are some great posts from July and August 2013, when the page was updated every few days to promote Shark Week. High-profile brand partnerships, exclusive video content, and Google+ Hangouts were all shared with followers and the page became very popular. 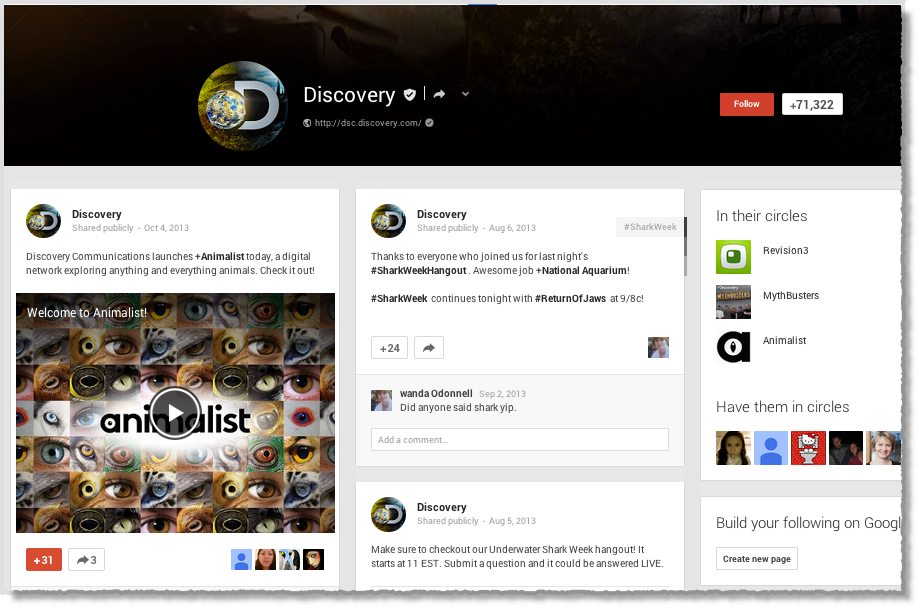 However, since then, the Discovery Channel has all but abandoned their profile – a shame, given the good start.

Gap are also guilty of abandoning their Google+ page. Between late 2011 and early 2012, they posted some fantastic content – followers were treated to exclusive interviews with bloggers and designers, product information, and song playlists. They also attempted to open conversations with their customers, asking questions and creating polls. However, they quickly ran out of steam, with the last post being sent out in February 2012. Gap would be wise to delete the page altogether, as an untended profile looks unprofessional.

Some brands struggle to come up with relevant content for their social media channels. MasterCard seem to have taken this to extreme lengths on their Google+ page. Aside from a short bio and profile picture, there’s no content whatsoever on the page – they’ve even neglected to change the cover photo from the default picture. This isn’t indicative of MasterCard’s performance on social media in general, as their Twitter and Facebook profiles are regularly updated with fresh, innovative content. It’s always wise to focus on a handful of social media channels, rather than struggling to maintain a presence on every site available – however, it’s never a good idea to leave a half-completed profile live on a service.

MasterCard either need to bring their Google+ page in line with their other social media, or delete the page altogether.

Amazon are in a similar position to MasterCard – their Twitter and Facebook profiles are executed perfectly, but their Google+ page has fallen by the wayside. Their page wasn’t always poor – scrolling back through 2012 reveals a steady stream of content, from ‘Deal of the Day’ posts to conversation-starting open questions. Throughout the latter half of 2012, the posts became less frequent, with the final update being shared on July 25th 2013. 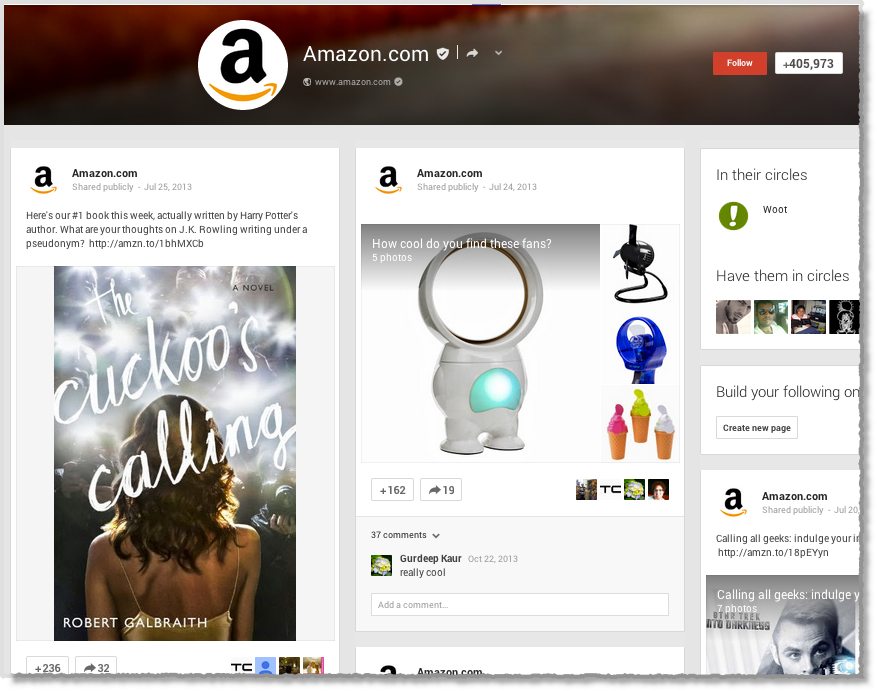 Evidently Amazon are more than capable of running a successful Google+ page, so it’s a mystery why the quality dipped as suddenly and drastically as it did.

Kodak’s Google+ page is surprising, given that they sell visual products. A scroll down the page doesn’t reveal any Kodak moments. Instead, visitors are met with a wall of text, interspersed with a few images – almost none of which are photos. 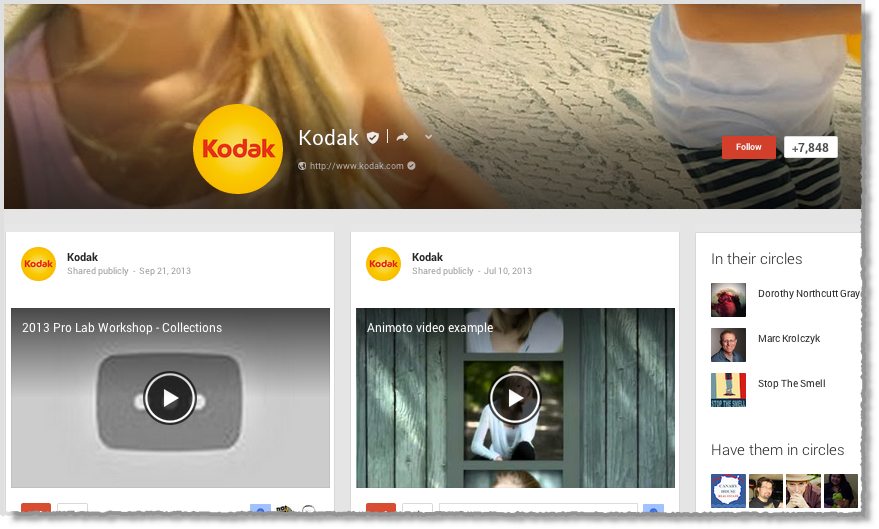 The cover picture – often the first thing a visitor to the page will see – is blurred and low-quality, which looks unprofessional. Kodak are also members of the infrequent-post brigade, often leaving months between spates of activity – fatal for a social media profile.

KFC’s Google+ page is perhaps best described as “uninspiring”. To date, there have only been 21 posts since the page began in 2011, and many of them simply serve to remind customers of pre-existing products. Any innovative content – such as a competition to win a scholarship fund, or the discovery of a manuscript written by Colonel Sanders’, has been re-posted several times, to the extent that it loses the sense of excitement and urgency. 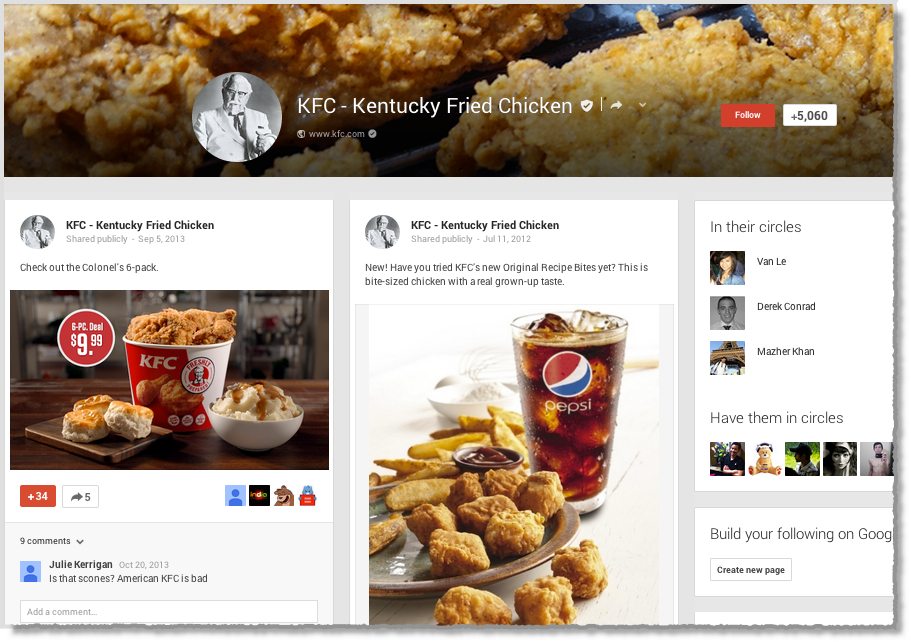 The page isn’t particularly bad – until it’s viewed in comparison with a competing page. Taco Bell’s page, for example, is a world away from KFC’s offering. It’s full of attractive, inviting images and videos, the content is always kept fresh and updated, and the posts make full use of Google’s hashtag compatibility.

KFC are not alone in looking shabby next to their competitors. Dr. Pepper’s Google+ page was evidently registered, assigned a profile picture – and then forgotten. It’s unsurprising that the page has only received a meagre 1840 +1’s. 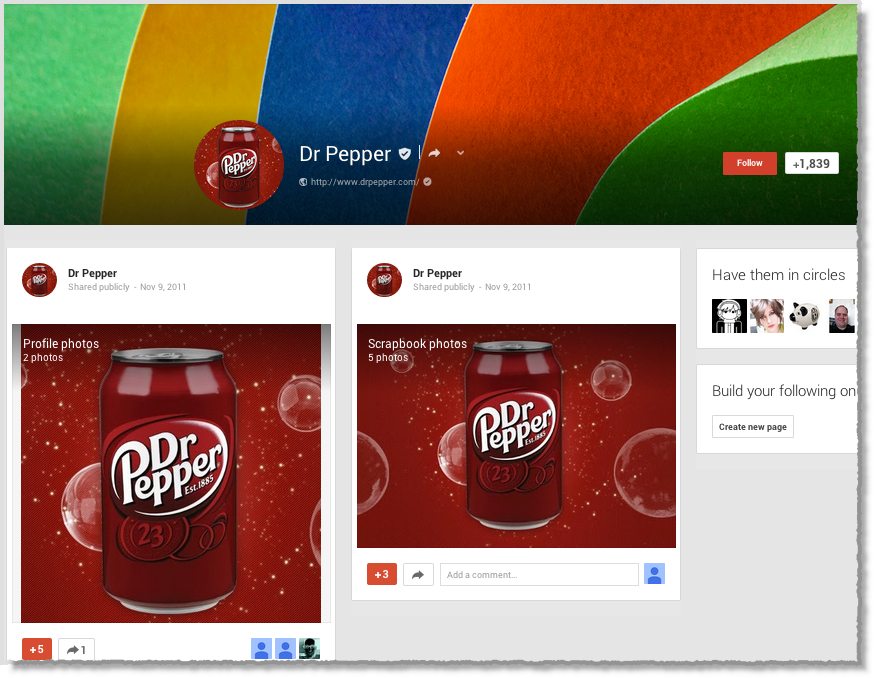 Compare this with Dr. Pepper’s competitors, Coca Cola and Pepsi, which have 1,148,797 and 809,262 +1’s respectively. It’s clear from the figures that social media efforts don’t succeed unless companies properly invest in them.

Macy’s have an impressive reputation. They own the largest store in the world, sponsor the annual New York Fourth of July fireworks display, and host the famous Macy’s Thanksgiving Day Parade. However, the magic of the Macy’s brand hasn’t filtered down to their Google+ page. 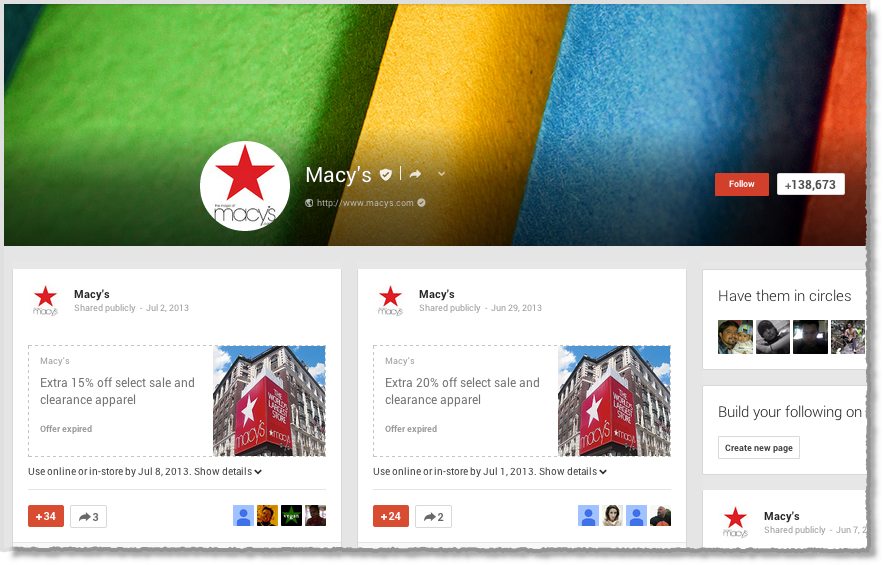 The cover photo hasn’t been updated from the default picture, and few of the posts contain images. The page is essentially a steady march of dull, almost-identical posts, each advertising the same “extra 15% off select sale and clearance apparel”.

Many of these brands are guilty of leaving Google’s default picture as their cover image – which instantly tells visitors that the page is probably low quality. Others commit the crime of posting far too infrequently – or not at all – and failing to provide interesting content.It’s vital to update or remove neglected Google+ pages – as on any social network – as an unfinished or lacklustre profile can appear unprofessional, and tarnish the reputation of a business.

Guest author: Sally Swales who is the Marketing Manager at EOG London.

Want to learn how to make your blog a success with social media marketing?

I also reveal the tactics I used to grow my Twitter followers to over 197,000.