Twitter has an image problem in that it is often seen as as a ‘plain Jane’ with a litany of inane tweets that are just 140 characters of black and white text. Facebook is seen more as the Prima Donna with a  ‘Mega’ rich database, highly engaged users and an obvious and glittering multi-media capacity that entices users with images, videos, personal connections and ease of use that doesn’t require a support center or a manual.

Twitter’s functionality is more low key and targeted than other social networks and its power lies in its simplicity. Google has maybe the simplest and homeliest homepage on the web yet behind that plain face lurks a powerhouse of search and functionality and an ecosystem that is both deep and wide. So don’t be fooled by Twitter’s apparent simplicity.

Larger companies and brands usually don’t have trouble acquiring Twitter followers because the brand is the attraction and the honey pot that draws the people to follow. Small to medium challenger brands and bloggers need to be proactive in acquiring followers to grow their base of appropriate and targeted followers.

So here are some simple Twitter tips and tactics to provide a toolkit for reference today and tomorrow for bloggers, companies and major brands.

You can start following people with high influence and large Twitter followings that are within your target market either using Klout or Twitter Grader as guides. Quantity is important on Twitter just like a large email database and don’t let anyone tell you any different. As your Twitter following becomes substantial then the way you engage with your audience will have to change as there is no way that you can interact as personally with everyone in your follower base.

There are tools such as Tweepi.com which makes it easy to follow followers of influential bloggers on Twitter.  Twellow.com also provides a tool that enables you to find powerful Twitter follower lists in your particular niche or vertical market. The quality part of the Twitter equation is ensuring that you have followers that are interested in your industry niche. If you wanted to acquire followers that were interested in Facebook for example you could do no better than following some of Mari Smith’s followers (also known as the Pied Piper of Facebook) using a tool like Tweepi. Sharing other blogger’s content on Twitter can help you gain their attention. You can let them know that you have tweeted their post or content by including your Twitter name eg @Jeffbullas. This sharing counts as part of engagement and connection that gets noticed and if you ask for a retweet of your link or post by that person in the future then you may find that they will help you out.

5.Automate the Tweeting of Other Content in Your Category

As you find other bloggers and influential tweeters in your niche you may want share that content that you now trust and add value to your followers by tweeting their content. This can be automated using Twitterfeed.com. As you can see below I send out the latest blog posts automatically via RSS detection within this tool that sends valuable content from Jeremiah Owyang, Lee Odden, Chris Brogan and Seth Godin amongst 19 others to my Twitter followers whenever they publish a new post without me having to get out of bed. 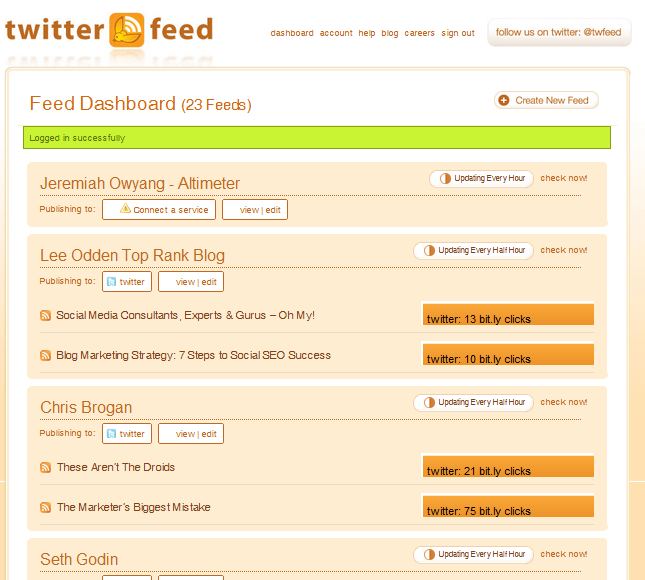 As you come across great content that you discover on the social web such as YouTube videos, Blogs and Slideshare then share them with your followers. This also includes the posts of other influential bloggers in your topic category as you come across them in your Google Reader.

Your blog post archive often contains great posts that you need to promote from time to time so they are not forgotten and buried in the dusty archives of  your blog . (SocialOomph professional can be setup to do this)
When tweeting your posts include # tags that deliver the Tweet to # lists. One example of a #list is #SocialMedia.

Twitter can be a great listening post and provides market feedback in real time and it is free. Companies pay research agencies large sums of money to solicit their customers opinions. There were 3.37 million mentions of Starbucks ( SBUX – news – people ) on Twitter through early May 2009 that provided Starbucks with a wealth of  information on how customers perceive them. “There is a major element of Twitter that’s about listening and learning,” says Brad Nelson, the man behind @Starbucks. “Twitter is a leading indicator”. Collecting the information is as simple as searching for references to your company.

The NAB bank is one of the largest banks in Australia and they tweeted the following tweet that appeared to be a mistake by a junior community manager.

It was in fact part of an integrated social media and traditional marketing strategy to get people to break with their current bank and to create buzz about their new competitive pricing across a range of their banking products  that they were offering to the market .

How do you use Twitter in your marketing strategy?