Regardless of how hard you try, your ex-boyfriend or girlfriend can be nearly impossible to forget about. You have forged memories with this person (both good and bad) over a certain timespan that are hard to let go.

On some days, Facebook facts can feel like you ex, even to the most social media-savvy marketer.

There are advertising campaigns you have run that have yielded outstanding results and led to more business for your company. On the contrary, your most creative advertising ideas have disappointed you with lackluster results.

Whether you have fallen in love with Facebook’s advertising or been heart broken, there is one component that is tough to argue with.

Facebook generates more advertising revenue than any of its social media peers.

Facebook is one of the big movers in paid advertising, but overall the pie is getting bigger as the move from traditional advertising to digital accelerates. According to emarketer By 2017, when US digital display ad expenditure will reach $37.36 billion, Facebook and Twitter together will account for 33.7% of the market, up from 30.2% this year.

Here is a graph to provide a quick visual reference of the projected growth of digital advertising.

The projected growth in mobile is nearly 300%! 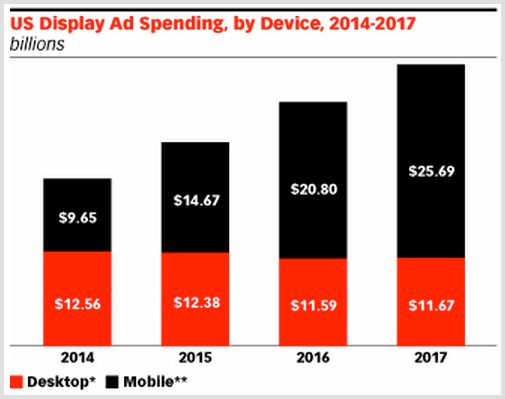 As you consider your business’ social media ad strategy, think about these 23 unforgettable facts about Facebook advertising. You just might be inspired to try something new with your next Facebook ad!

1. There are more than 2 million active advertisers on Facebook
That means advertising is more consistent and competitive than ever, and ads with high quality content and appeal will rise to the top. (February 2015)

2. Over 700 million users visit Facebook on mobile each day

The number of mobile users is only growing. Even if your Facebook ad is pristine, be sure links out to your website are mobile-friendly. (2015)

3. Mobile makes up 66% of Facebook’s advertising revenue, up from 49% one year ago

This number will undoubtedly be even larger next time around. Take advantage of this growing market of mobile users! (October 2014)

4. Users bought $234 million worth of virtual goods and gifts on Facebook over a quarter

During Q2 of 2014, Facebook users proved they are not shy about utilizing Facebook in their online spending. (July 2014)

On average, if you target your ad by a custom audience rather than by category or interest, cost-per-click is 14% lower, and cost-per-conversion is 64%. (October 2013)

6. 21% of fans Like a page to do research on that business’ goods or services

Your Facebook page can be an educational tool to help users understand your product. Take advantage of this space where you can speak directly to the customer! (July 2013)

A term coined by Socialbakers, a “socially devoted” brand has open communication with their fans, responds to user-posted questions at least 65% of the time, and in a timely fashion. (September 2014)

8. 41% of fans Like a page to receive regular updates from a brand

Your brand’s Facebook page is your direct channel to keep customers in the loop about the business. Post on a frequent schedule so you can maintain your fans. (July 2013)

9. Facebook boosts visibility for the last 50 pages a fan interacts with

The site keeps track of the 50 most recent pages a user has engaged with and boosts those pages’ content on the user’s News Feed. It’s important to be one of those last 50 pages, so post consistently! (February 2014)

10. About 75% of a post’s total engagement will happen within its first 5 hours

This is likely thanks to Facebook’s Autoplay feature – users are sticking around to watch the video, and as a result, user engagement with video posts has increased. (April 2014)

14. Asking a question at the end of your post yields a 100% increase in comments over posts with a question in the middle of the post

If you pose a question to users to make your post more interactive, put the question at the end of the post so users feel invited to take part in a conversation with the brand! (January 2013)

15. 35% of Facebook fans Liked a page specifically to compete in a contest

Contests can be a great way to grow your fan base quickly. After drawing in new fans, post engaging content so they stay after the contest is over. (December 2013)

16. Approximately 70% of monthly users in the U.S. and Canada are connected to a local business

Users want to connect social media networks with their communities, so local businesses can cater to users’ wants while increasing their customer engagement. (April 2013) – If you have apartment communities in Mason and Loveland and want more exposure, connecting with residents through Facebook would be a great option!

17. There are now more than 40 million active small business Pages on Facebook

For small businesses operating on a budget and limited connections, Facebook is the perfect way to reach out to customers and grow your market. (April 2015)

18. One out of four people who use Facebook to write complaints to brands expect a response within the hour

If your business has a small social media team, this may not be possible. Still, be diligent of what customers ask on your brand’s Facebook page. (2013)

This is promising news for Facebook advertisers. If you can provide the quality content, you have a good chance of getting users to your site! (April 2014)

People typically feel more comfortable engaging with a brand after they are familiar with it. Find ways to motivate potential customers to Like your page. (July 2013)

If a text post is more concise (limited to 250 characters or fewer), users are more willing to commit the time to engaging with your content. (December 2013)
American Relocation Connections was able to generate amazing interaction with this simple yet effective post about Warren Buffet.

Maybe it’s that Friday afternoon slump! More than any other day of the week, users are most likely to engage with your posts at the end of the workweek. (April 2014)

Facebook advertising is essential to any business or brand trying to reach out to customers. Well-targeted Facebook ads can bring in new fans and retain old customers in the same post, and a great Facebook ad can build your brand’s credibility and web presence.

The more fascinating facts and tricks you learn about Facebook advertising, the better you can understand how to use Facebook to your business’ benefit!