A while back I came upon a YouTube video by Jason Goldberg the founder of socialmedian  (which was bought recently by Xing , a Social Networking  site ). The essence of  his strategy and success was a principle called “Just Ship It” which is a rather novel approach to building a company where normally just adding a feature to a single product for a company requires full anlysis, then more research is required to confirm the analysis, then its built, tested, revised again and then launched when its absolutely perfect (maybe 2 years later). By that time the competition could have built it, shipped it and be onto the next phase and maybe even sold the idea or business unit, in fact  Socialmedian was acquired by Xing for a purchase price of $7.5 million, an excellent return for the bootstrapped startup which had raised less than $1 million in funding and was sold in less than a year from start up.

So while I was talking to a client today who has been agonising over the detail of the design, features and colours for their website (for the last 5 months) I was reminded of the principle of  “Just Ship It” and how important it is in the new age of digital media and how even more relevant Nikes slogan of “Just Do It” has become.

While this client is agonising over the minutae, the competition is pulling ahead and the gap is widening and the hits to their website is slowing and their website enquiries are dropping.

So what are 7 elements and building  blocks behind the principle of “Just  Ship It” ?

Most companies (and consumers) get into the “Paralysis by Analysis” syndrome when they start taking about getting involved in making decsions whether its the decision to buy a piece of art, select the best jam or even start engaging in  Social Media and this was highlighted by a post at Social Profs (A Social Media Blog), that commented on some  research revelations in a book titled “How We Decide” by  Jonah Lehrer at the “Neuromarketing Blog” by Roger Doooley.

“Choking isn’t just for golfers and free-throw shooters. A particular kind of “choking,” thinking about the process of doing something instead of just doing it, can affect us all even when performing such mundane tasks as choosing a good-tasting fruit jam.”

The two experiments revealed  “that consumers may suffer paralysis by analysis if they aren’t allowed to trust their guts when making buying decisions and this same principle applies when business leaders and managers don’t trust their instincts and “freeze in the headlights”. So what were the revelations.

Experiment 1: The Jam-Tasters. One group of shoppers was asked to rate a range of jams and choose those with the best flavor. This group “rated the jams in a very similar order to the professionals” by simply letting their taste buds decide, Dooley reports. A second group was asked to rate the jams, and to explain their ratings and analyze their first impressions. The results? A miserable mess. “This extra thought process … seemed to jumble their choices,” Dooley says.

Experiment 2: The Art-Lovers. Another group of consumers was invited to choose a free poster to take home. The posters included reproductions of Van Gogh and Monet paintings as well as cat pictures. “The first group simply picked,” Dooley says, “and 90% chose one of the fine-art posters.” The second group was asked to rate the posters and explain their choices. This group split about 50-50 between choosing the fine art and the cat pictures. But here’s the kicker: “When the groups were [later] surveyed … 75% of those who took a cat poster regretted their choice,” he notes.

“No, your ‘gut’ isn’t always right,” Dooley concludes. “But it may make better choices more often than we give it credit for.”

The Point: Don’t over analyze what to do with Social Media for your company “Just Ship It”

So are you still analyzing Social Media or are you “Just Shipping It”?  Looking forward to hearing your stories about your companies “Paralysis By Analysis” or  is it now “Just Ship It” 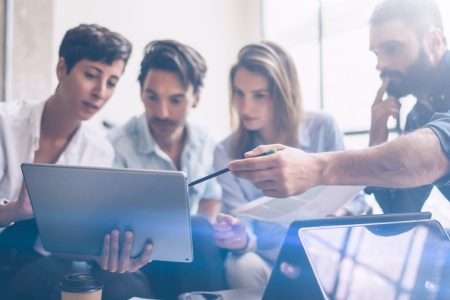