Trick question: What do The Price Is Right and the Butterfly Effect have to do with Facebook’s recent News Feed changes?

If you’ve seen The Price Is Right, chances are you’ve caught a glimpse of Plinko, a game in which contestants stand above a board and drop a chip through one of five slots.

The slots lead to a network of pegs that randomly adjust the course of the chip, making its placement at the bottom of the board almost impossible to predict.

If you’ve ever tried organic marketing on Facebook, it can feel a lot like dropping a chip into a Plinko board.

You can make reasonable decisions about where, when, and how to market your content, but so much is going on in the background – among ones, zeroes, and algorithms – that can completely throw off your goals.

You can analyze the placement of “pegs,” be deliberate on the slot you think will lead to the end goal, and hope your content reaches the intended target, but the sheer number of pegs makes it incredibly difficult to predict how well it will be received.

In connection with Plinko and Facebook, the Butterfly Effect is the idea that small changes can cause monumental effects in complex systems. In other words, adding an extra peg can completely change the entire game of Plinko.

I hate to be the bearer of bad news, but Facebook just added another peg to its ranking algorithm.

To keep up with Facebook’s speed, as well as the other social networks, marketing specialists will need to accept some hard truths. As a marketer, you now need to kick your marketing skills into overdrive; you’ve been idling for way too long.

Let’s take a look at a few of the reasons why the new ranking method is actually a step in the right direction for companies looking to improve the quality of organic traffic.

Who loses and who wins?

To avoid any confusion, most organic marketers are likely going to lose traffic. Unless you are an exceptionally talented marketer, your pages do not see a huge number of meaningful conversations.

“Over the next few months, we’ll be making updates to ranking so people have more opportunities to interact with the people they care about.”

“There will be less content directly from (professional) Pages.”

“There will be less video. Video is an important part of the ecosystem… But it’s more passive in nature. There’s less conversation on videos, particularly public videos.”

Some experts believe that the change will completely dissuade some brands from even giving an effort for organic traffic on Facebook.

According to Burton Hohman, Paid Search Manager at Best Company, the changes “will push brands even further away from Facebook if they weren’t already spending money on the platform.”

Since the ranking change doesn’t have anything to do with paid search, most companies using Facebook ads won’t see much of a difference.

Hohman goes on to wonder whether Facebook will eventually “move into the ad territory to start making changes.” He continues, “But I don’t see that happening for a while because Facebook is still a business and the only thing they care about is making money.”

The news feed changes come at a time when loyal Instagrammers are beginning to complain of over-advertising and the lack of personal content on Instagram.

Near the end of February, Instagrammers began a mass exodus to Vero, a social sharing app released in 2015 that is completely free from ads. Vero saw such a high influx of users that its servers quickly crashed. But that didn’t stop it from rising to the top of the free apps list on the App Store.

The point is people are losing patience for traditional advertisements; they almost crave the social side, the peer review, and the referred product. Marketers need to understand that friendship is quickly becoming a requisite quality of the best marketers.

On the other hand, priority and higher rankings will be given to public posts that see sincere engagement in the form of meaningful comments and shares.

So if most companies are going to lose organic traffic, why make this change at all? Facebook has actually come out and acknowledged “that passively consuming articles or videos that don’t spark engagement or interaction is bad for a person’s mood.”

Robert Kraut, Professor at Carnegie Mellon University, describes the early years of the internet when users were only interacting with strangers online. This lack of meaningful interaction led to loneliness.

Research today suggests that when internet users interact and have meaningful conversations online with friends and family members, their well-being increases. So, marketers need to be asking themselves some tough questions right about now:

These questions are really just different versions of the age-old question for marketers: How do we build true customer loyalty? The changes to Facebook’s feed are just the next manifestation of our need to employ trustworthy marketing methods.

What to do and what to avoid

As a social advertiser, you don’t just want leads, you want quality leads. You want leads that already have the seed of trust planted within them. Quality leads are hard to find, but Facebook’s News Feed changes may actually help to localize them.

According to Social Media Examiner, the types of content that will now see more distribution on Facebook are general posts from friends and family, friend posts seeking recommendations or advice, and those rare news articles and videos that spark sincere conversation.

The algorithm change means you should focus on posting conversation starters:

In other words, most leads to your business will likely come as a recommendation from a close friend or family member. This means that those extremely few companies that do manage to break into the exclusive club of organic traffic on Facebook will likely see an increase in quality leads.

If you have not already been doing so, you should begin to consider Facebook a friend of the user. Its job, on the surface, is not to pander to your needs. Instead, the main goal is to find and facilitate deep connections between users.

As a marketer, you already know that word-of-mouth referrals are a fantastic way to gain loyal customers; this is your in. Focus on organic content that caters 100 percent to the customer and avoids any hint of self-promotion.

You should know that “engagement-baiting” is a sly tactic and that Facebook will penalize and demote any content that contains it. Such posts focus on gaining comments, likes, and shares, not out of a need to connect people, but from a desire to hijack Facebook’s ranking algorithm. 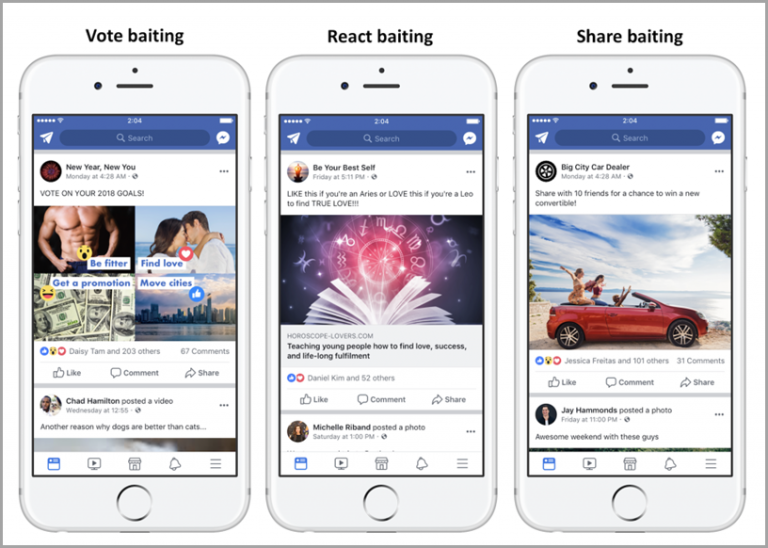 Marketers should know better and Facebook has become smart enough to catch these techniques. Engagement-baiting is manifested through the following hallow captions:

Where are we heading?

Companies were noticing the drop in engagement trends back in 2017. Revealed in an article by Buzzsumo, Steve Rayson and his team analyzed over 880 million brand-posted Facebook posts. They discovered that engagement rates had dropped 20 percent just in 2017 alone.

This decrease in engagement is not likely to slow down.

It won’t be long before brands begin looking for more brand-friendly social platforms like Instagram or LinkedIn. This would also be a good time for Twitter to step up its organic marketing services for brands, in effect capitalizing on the likely exodus from Facebook.

Facebook’s news feed changes will likely accelerate a distaste for its organic marketing capabilities and some companies are going to pay the price.

Guest author: Chad Zollinger is the Mission contributor and Content Strategist at www.bestcompany.com.