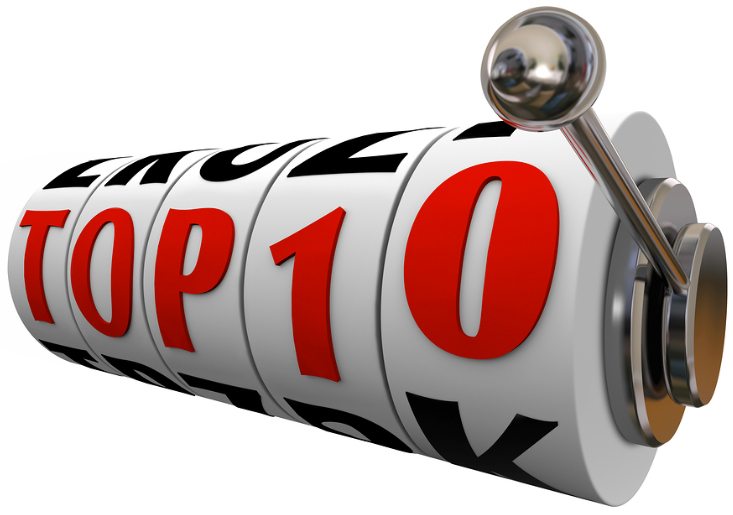 Have you ever spent hours, days, or even weeks trying to plan that perfect social media campaign? If so, you are by no means alone!

The amount of people marketing directly to consumers on social media has gone up exponentially over the past year, and rightfully so. Over 1.3 billion people log into Facebook alone every month, according to Facebook’s last earnings call. That’s a whopping 14% of the earth’s population – so why not market to them on social?

Below, I have put together a list of the top 10 campaigns launched in 2014 with the help of some designers and other analysts according to specifically picked categories to best benefit you. These categories include:

Hopefully these will get your brain churning for some creative ideas to launch successful campaigns for your business to wrap up the year and start 2015 with a bang.

Who doesn’t love something pretty to look at?

These two campaigns really caught our attention when we saw them, and their conversion rates showed that they caught other’s attention as well. A great graphic design can really affect the results of a campaign, so it is imperative to make sure you spend time on those before you launch. The most important part is to focus on matching the contest to fit your brand.

Inkwell Press effectively created an elegant custom contest to fit their needs as a company focused on design. The first aspect of their simple contest included their logo, which aided in brand recognition. The hero image used the same theme as the logo featured on a cell phone case, the planner that they were giving away, as well as text in an attractive font used across their brand that gave information about the prizes they were giving away.

They also took advantage of a text box beneath the main image to elaborate on their contest rules, and give more information about the contest. The information was concise, and highlighted the prize as an incentive to enter. 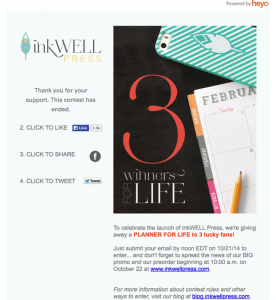 Goorin Brothers, a specialty hat company based in San Francisco used a custom built contest to ensure that they had complete control over design. The background is the star of this particular contest; the photo is a perfect example of Goorin Brother’s target consumer wearing one of their hats.

The designer used a photo editing software to place text over the picture in an extremely visually appealing location. This technique worked to grab fan’s attention in the red circle that talks about the prize, as well as the text across the top of the image.

Overall, the design is simple and clean, and obviously effective, as Goorin Brothers captured 8,404 emails with it! 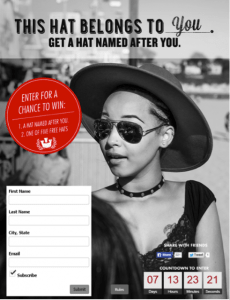 Some small businesses get easily discouraged when getting started on social media and building their brand. This category goes out to some companies that motivated me by their drive to get started and have success with campaigns. If you are just getting started building engagement or your Facebook presence as a whole, do not fear, it can be done with some effort!

Kyle Ducharme began his single-origin coffee business is December 2013, but his first batch was not set to arrive until June of 2014. With this is mind, he decided to run a contest with the launch of his Facebook page for someone to win a “First Taste” of the premiere batch of coffee from Northern Thailand.

He brainstormed every detail of this contest ahead of time, and not only did it look great, but it performed even better! With the effort he put into this contest, he was able to collect more impressions with this contest than the amount of fans he had started with on Facebook. Not only that, but the contest converted at 42%! 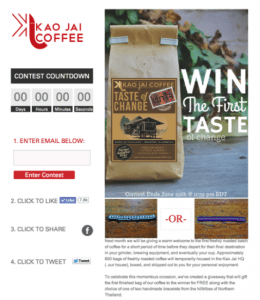 Enticing tables was not completely new to the contest scene, but Valerie McCartney from their team was ready to get some great results from launching a new and energized contest layout! She spent some time creating a contest to give away one of their lovely cupcake tree stands to bring in new emails to help grow the business.

With a contest, she knew not only would it collect emails for her, but it would grab new Facebook fans as well. The immediacy of this was something that really motivated her to run this successful campaign that converted at 43% – performing much better than she imagined. Her hard work paid off and has helped the business grow immensely. 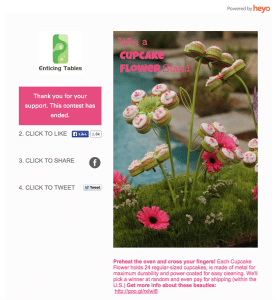 One piece that will help contests convert at a high level is having a well established brand name. This is something you definitely cannot build overnight, but by hustling day in and day out for this passion you have. This category is a prime example at some well known brands that people are beyond loyal to, and it shows based on the extremely high conversion rates. Building a brand is about  figuring out what you are and staying true to that and your fans, Facebook or not.

Mary J. Blige has a huge following and is known for her musical style and swagger. She launched a contest to show her appreciation towards her fans while driving sales to Mary’s new site, Birthday Girl World. One huge reason this contest was so successful was the prize she choose tied directly into what she does.

With the brand name she has built that her fans trust so much, who wouldn’t want to win this contest she ran? It converted at an astounding 85%! That’s right, of every 10,000 people that viewed this contest, about 8,500 provided their email addresses. 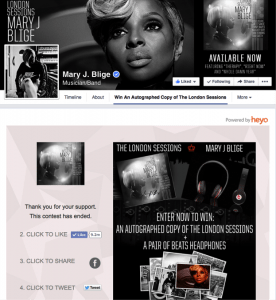 With a name like that, it is quite obvious who this brand reaches. But not only are they focused on the great beards of the world; they also are raising awareness for the lack of clean drinking water around the world. With the 64% conversion rate they got on this contest, Incredibeard is trying to raise awareness for this cause so closely tied into their brand and what they represent. They have quite the following, and such dedicated loyal fans that this conversion rate did not surprise me one bit. 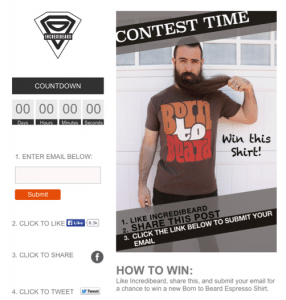 The biggest reason most people are running these types of contests I’ve shown you so far is to gain more email leads. But once they get those leads, the most important step is actually taking action with them. This category goes out to the best post-contest campaign we saw from an email-marketing standpoint.

Immediately after entering Solo Stove’s Facebook contest, the entrant received an email notification to inform them that they had successfully entered. This email also gave them options to share with friends, as seen below. A few days after the campaign ended, they emailed all entrants to let them know that they had not won, but as a consolation, they offered a discount code for their website.

This drove more sales than the contest cost did to begin with. That is the return everyone wants on any campaign! Lastly, months later when Solo Stove was running another contest, they notified via email that another giveaway was occurring. 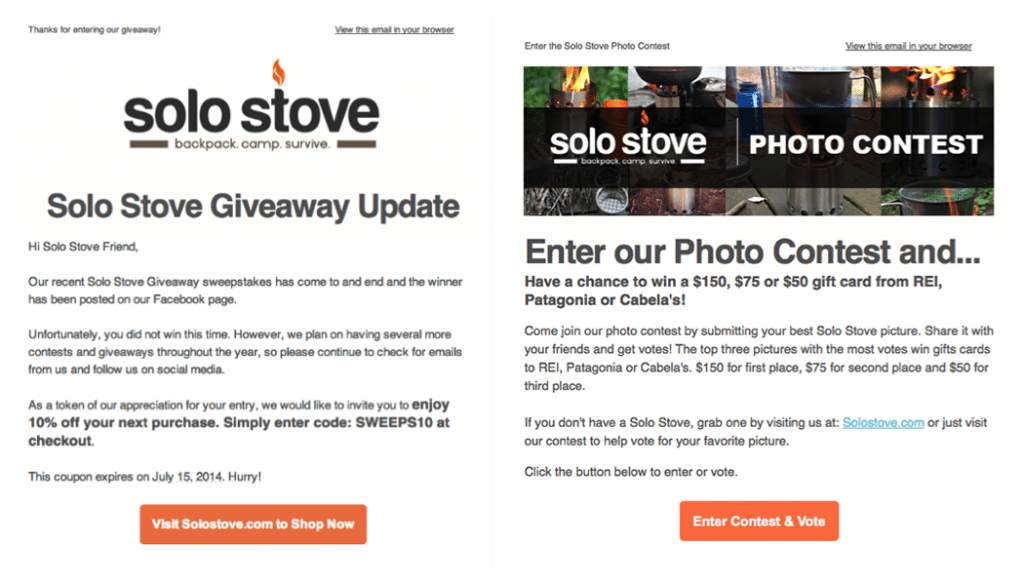 Strategically running a contest at a certain time can really help improve your results. Whether that’s a huge event happening, or a national holiday coming up, getting creative with the prize around this time can boost the results immensely. The three campaigns below are great examples of how you might be able to take advantage of any holiday or event that pertains to where you live. I believe that this “tie-in” with an event is so important that I decided to showcase three in this category to help you realize how valuable this tactic really is.

Precious moments is taking advantage of this winter holiday season and giving away a signed ornament. They know that a majority of their customers purchase an ornament every holiday season to place on their Christmas tree, so they decided this was a great time to convert their social media fans into email leads. With great graphics and a great concept, they are sure to have a happy holiday themselves. 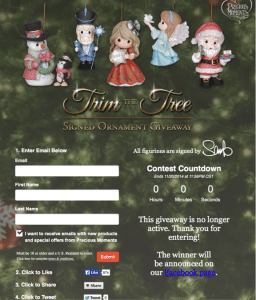 In the United States, the Fourth of July is celebrated in many different ways. But there are many people that celebrate with grilling and enjoying the company of their friends and family. Botto’s Genuine Italian Sausage took advantage of this and made a perfect giveaway bundle that helped them collect 303 new email leads. 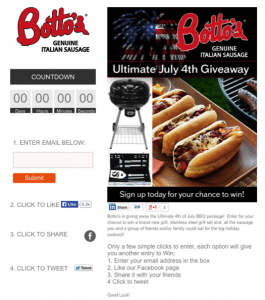 This particular contest did an amazing job all around. They knew they would have empty rooms on Valentines night, so they decided to turn it into a contest to increase their email list and engagement on Facebook. The prize was a great fit for a young couple that needed holiday plans, so they ran with it and ended up collecting 715 new emails for their list! What would’ve been an empty room turned into their most successfully converting campaign ever. 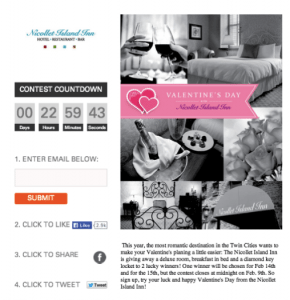 Want to learn about the strategies behind the Top 10 Facebook Campaigns of 2014?

Join Nathan Latka, CEO and Founder of Heyo, and Jeff Bullas on the upcoming webinar on December 8. Click here to claim your free spot!

Want to launch your own contest to collect email leads and drive engagement?

Have no coding experience and want to launch a contest like the ones above in just 10 minutes? All of the contests featured above were created at Heyo.com and you can sign up for a free trial today by clicking here!

Author: Jay M. Tucker is a Social Media Strategist at Heyo.com. He is focused on helping small business’ grow and allowing people to pursue their passions through the use of social media to increase business. Follow Jay on Twitter.