So you think mass media is dying… think again! Americans spend over 50% of their free time either parked in front of their television or watching it while engaged in other incidental activities around the home. 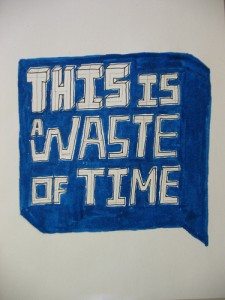 Nielsen have released a 2010 Media Fact Sheet that reveals that 31.5 hours per week is what the average American spends watching TV!

So here are some simplistic numbers that show how much time is wasted vegetating in front of  “Lord TV”. ( I know some of you will say that you watch TV while doing things with the kids or using the computer, so you aren’t wasting your time in front of the TV).

So here are the numbers.

5 days per week you work for 8 hours per day plus 2 hours per day getting to work including, showering, dressing and commuting = 50 hours
Sleep time per week 7 x 8 hours = 56 hours

Time available for other activities

That is a bit scary!

Just imagine how good you would be at something if you took that 31.5 hours and devoted some of that time to your passion or hobby whether that be a musical instrument, photography, painting, sailing or even knitting.

Here are some of the other statistics provided by Nielsen showing the disparity of time spent with mass media compared to social media.

The question to ask is this.

“Is  TV marketing to the numbed masses effective or just wasting advertising dollars on an audience that isn’t hearing your message?”