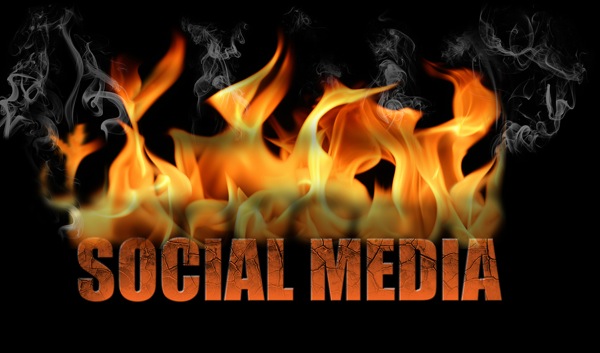 Here’s the problem: As of February this year there were 2 million advertisers on Facebook alone.

And, there are a bunch of ways for any advertiser to get the job done on a minimal budget.

That means glut. Honestly, no one’s going to care about your social campaign unless it differentiates itself. No one’s going to see you unless your content fire is bright.

How do you stand out? How do you prove you’re different?

Be the individual you are. Tend your fire so we can see it.

Take advantage of the following methods to make your social media content sizzle.

We play games with each other throughout our lives. 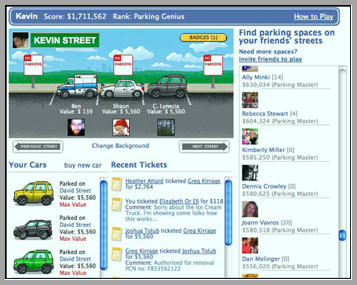 The end result of this effort to market the show Parking Wars was a total of 1.5 million users.

Parking Wars was so successful because users could play with friends. There’s nothing quite like social motivation.

Going viral is the Holy Grail of social motivation. And Twitter is a good place to seek the Grail because it’s so easy for users to retweet what your content.

As with everything in the social media world, there are no absolute predictors of what will go viral. Humans are an unpredictable bunch. But we do a lot of research, and there are tools.

One of these tools was developed by researchers at Cornell University. They developed an algorithm to predict what will be retweeted, and a program to determine which wording is more likely to garner retweets. 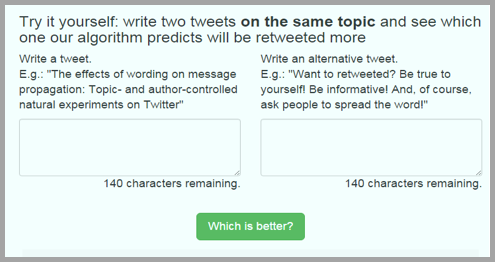 The key takeaways are:

Words are important, but if no one can see you, your words won’t mean as much. On any social media platform, getting visual is a must.

The photo-sharing app Instagram is the fastest growing major social network, with 26% of U.S. adults among its users.

For brand pages on Facebook, posts in the top 10% include photos. These posts account for 87% of total interactions. 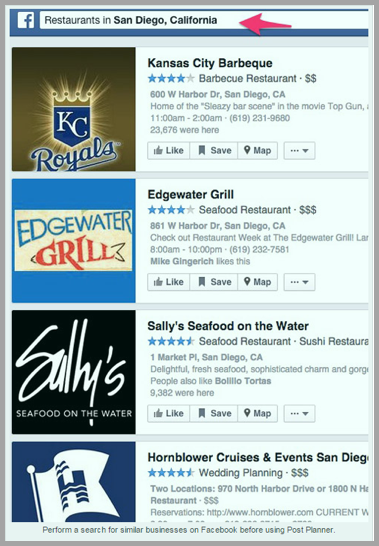 Compile a big list. Then use a tool like the Post Planner Viral Photos feature (disclaimer: it costs $7) to filter out the images that have gone viral. 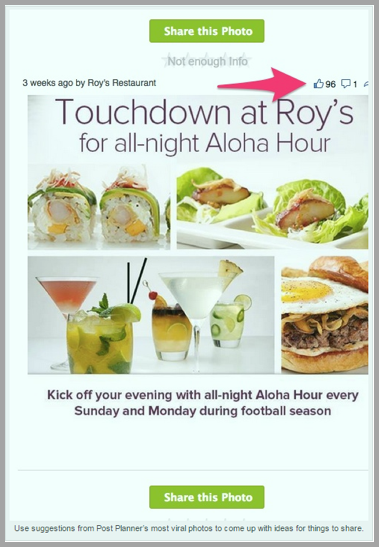 Naturally, you’ll adapt. You’ll learn from the stuff that has gone viral.

And then you can get down to the business of creating and curating your own visual content.

Researchers at Indiana University Bloomington found you can predict the virality of a meme by analyzing the structure of its retweet network.

Early on, if the meme is retweeted by a more diverse community of users, it’s more likely to go viral.

The researchers were able to use this analysis to predict which memes will go viral with over 60% accuracy.

When you create memes and infographics for your business, think diversity. Create images someone would want to look at even if they know anything about your business and niche.

The main intent should be to entertain and educate – not advertise. Advertising is the result of just how damn good your content is.

Imgflip is just one of the many options. For our purposes it should do fine.

Choose to upload your own image. Or choose from the list of images directly below the button.

After you’ve uploaded the image, add text at the top and bottom. You can even choose to add a scumbag hat. (Author confession: this is a meme of me with a scumbag hat.) 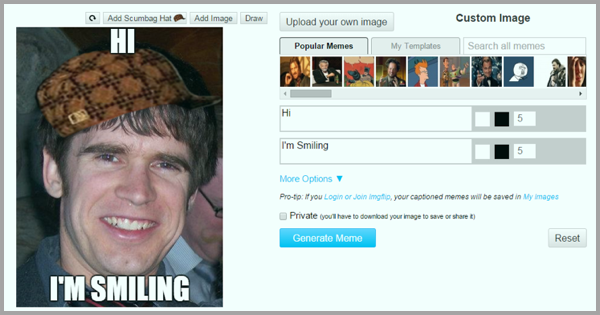 Check the “Private” box if you don’t want it floating around online (probably a good idea so you can control dissemination). Play around. Then hit “Generate Meme”.

Canva and Venngage both have great infographic apps.

This template’s called “Sweet Blue”. You can access a template easily after hitting “Create Infographic” once you’ve logged in to Venngage. Or you can start from scratch. 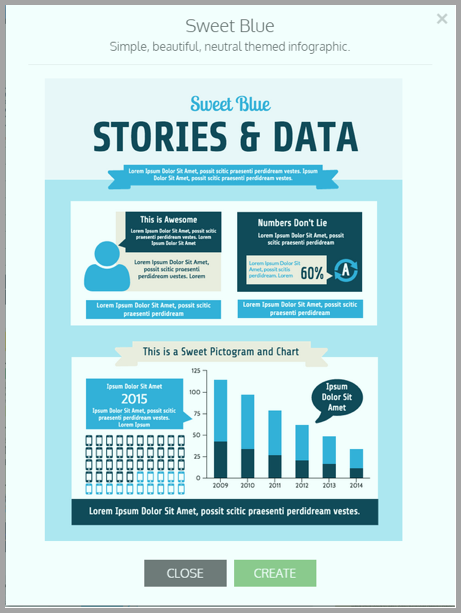 When you’re in template mode, single out a section by clicking on it.

Then click delete up top. Next, drag over the Title Text box from the left.

Just like with memes, play around. Add interesting info and images.

Again, the most important thing to remember about infographics is that you are competing with loads of informative and entertaining content.

Attempts at blatant advertising should be shunned. Attempts at slighting the competition should be equally shunned.

Facebook now places videos at the top of News Feeds, prioritizing this type of content over any other. They play instantly when you scroll down the screen.

In a recent development, Snapchat plays video ads too.

This is one more way, out of hundreds, to differentiate yourself on social media.

But how? Loads of advertisers use videos. You’ve got to learn from the best.

These rules could apply to any type of content marketing.

There really aren’t scientific formulas for this. Where we’re going there are no roads – just great social media content.

Guest Author: Daniel Matthews is a writer, part-time social worker, and musician who loves to explore topics ranging from technology to business culture and psychology. He has written for Social Media Today, Triple Pundit, Smart Data Collective, and YFS Magazine, among others. You can find him on Twitter @danielmatthews0