Recently I bought a brand new SLR camera. It had all the right features,18 mega-pixels, interchangeable lenses and high definition video. 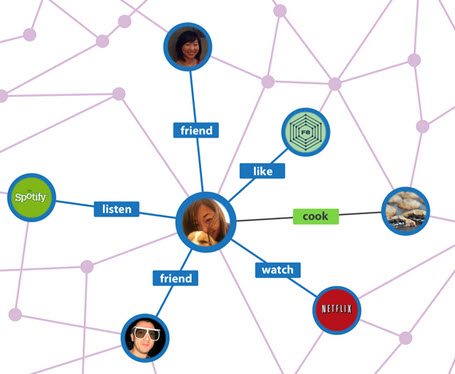 I didn’t do much research but purchased it because a work colleague who is a expert and passionate photographer recommended it to me.

After reading a compelling novel I am sitting around over a coffee and tell my friend that the book  is so good that I couldn’t put it down! Later that week they either buy it online or pick it up at their local book store.

I hear a catchy tune on the radio or on Facebook and I have to tell my friends about it and  also share it on my Facebook page.

The power of social proof and word of mouth drives a lot of our actions. We all are time poor and our observation of the actions of others drives behaviour and actions.

Facebook wants to take these personal recommendations from offline to online and take word of mouth to a whole new level.

A social graph of world of mouth and actions!

In September Facebook announced some changes to its technology called the “Open Graph“.

We have all become used to using the word “like” on Facebook and even the words “shared” and “commented“.

The Facebook “Open Graph” is designed to take the generic “like” to a whole new level with specific actions of your friends able to be openly shared and shown on your Facebook page by allowing Facebook app developers to build these action words into Facebook. 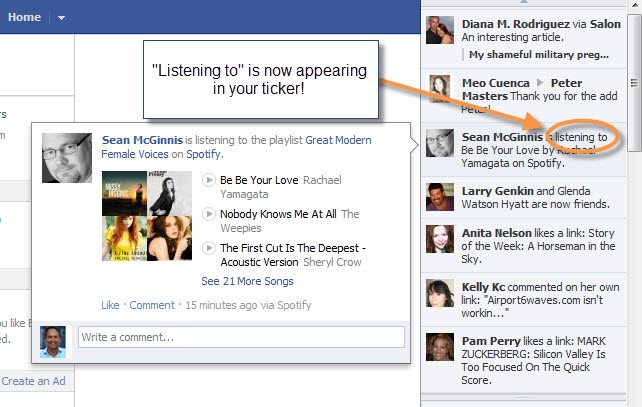 The power of displaying these “action” words such as “listen” is the ongoing development of  Facebook apps such as “Spotify” that openly share your actions on Facebook.

These “actions” are now becoming evident and are appearing in the “Ticker” of your Facebook page such as displayed in the screen shot above.

This makes it easy to discover what your friends are listening to and enjoy the music as well!

The Power of Facebook’s Open Graph

Facebook worked with a dozen developers to implement and test the new “open graph” with music which has a high social motivation to share.  This was done to display the power of integrating people’s actions into the ever deeper and broader social web with the key action of “listening”.

The results according to the Facebook Developers Blog are significant! Here are six social music apps that you may enjoy and be inspired by!

Already one of the defining social music apps on the web, they expanded to the US this summer and “added well over 4 million new users” since f8.

Y Combinator-funded startup built by a team of musicians “saw a 1350 percent increase in the number of users” becoming fans of the band they’re listening to. 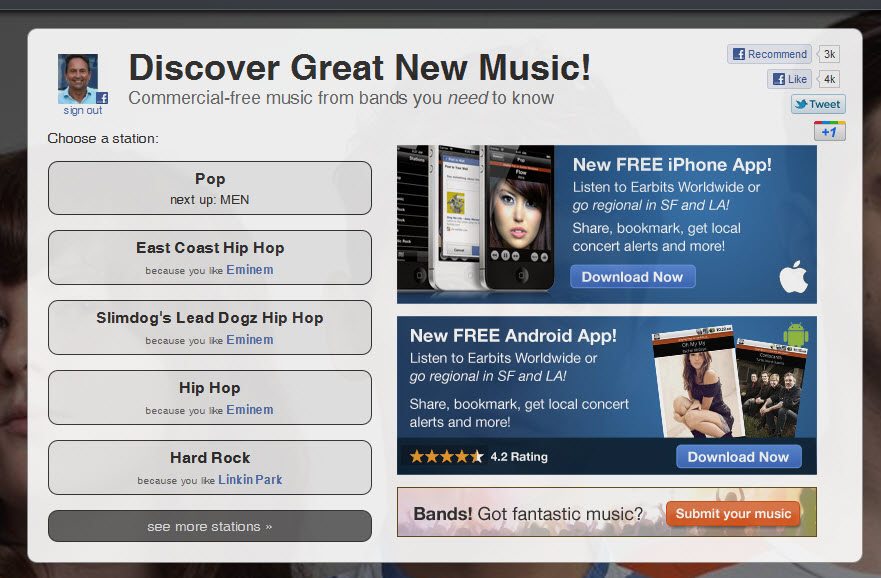 Their uniquely social business model has “led to a 246 percent growth in Facebook users” since f8. 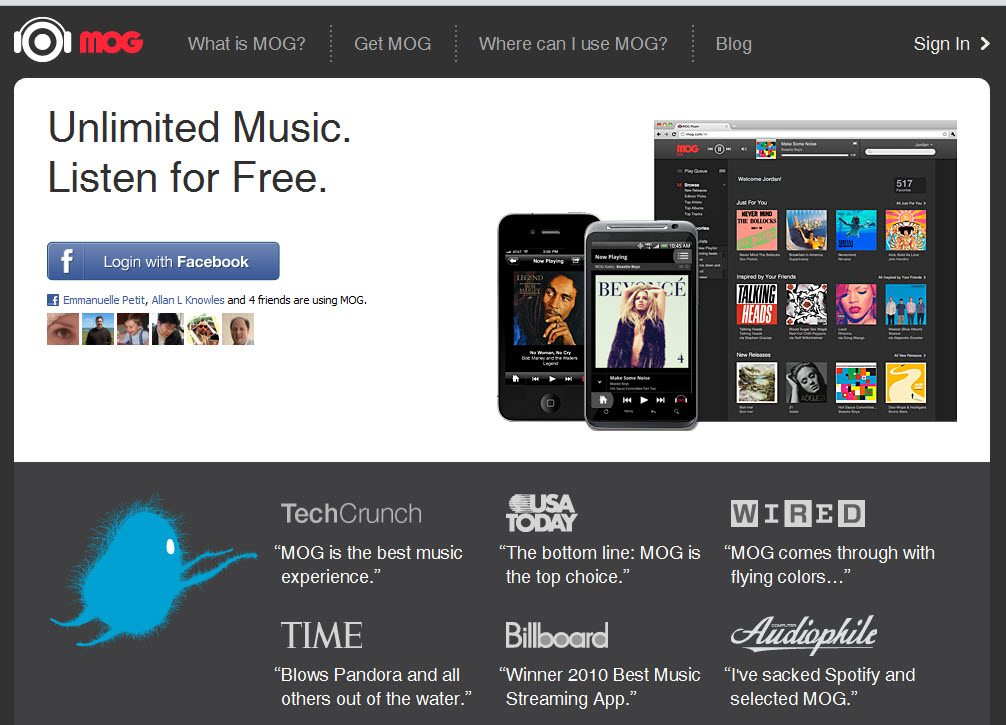 Their strong social ecosystem has “expanded with a 30x increase in new user registrations” from Facebook. 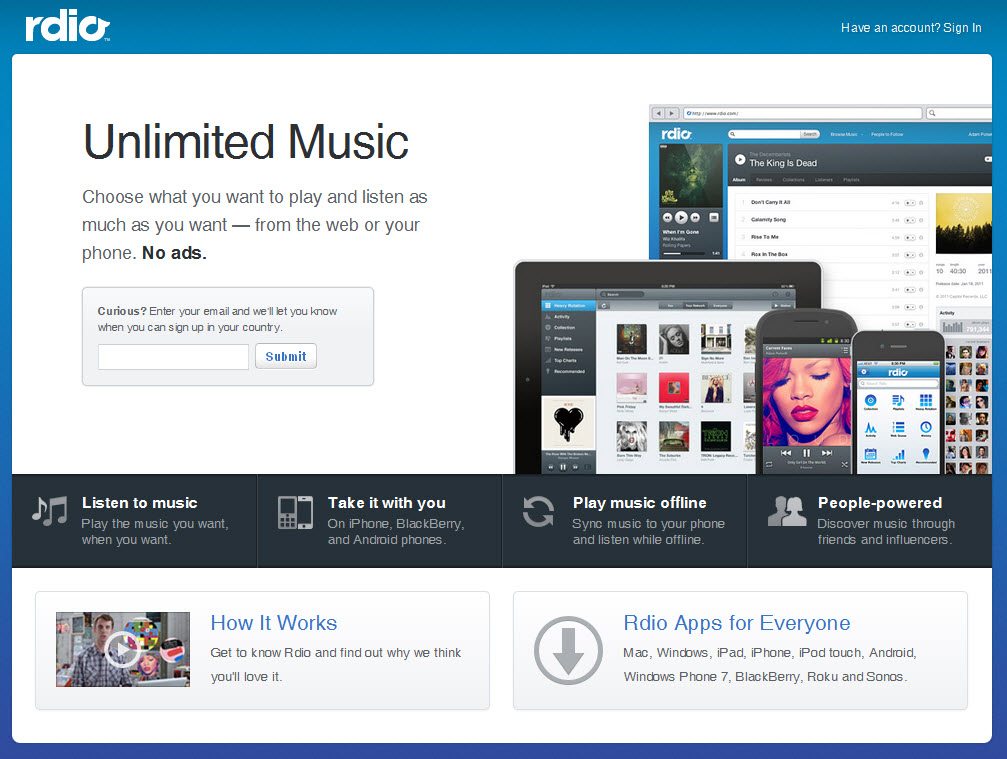 Available across mobile, TV, auto and web, Slacker “saw a more than 11x increase in monthly active users in the month” following f8. 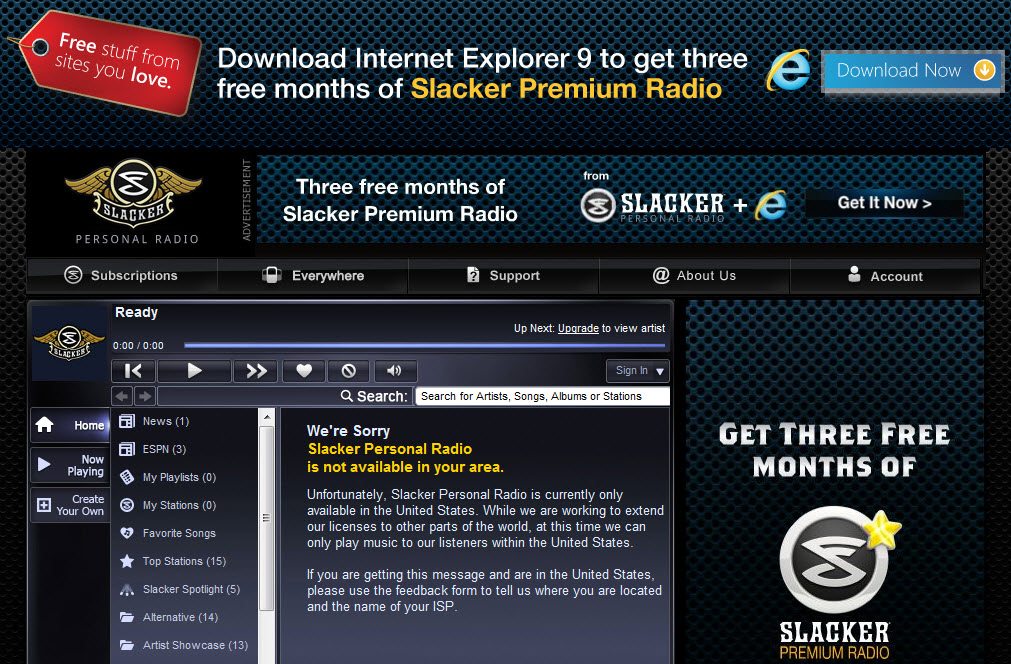 Based in France, they’ve “added more than 10,000 users per day” since finalizing their Open Graph integration.

It’s still early, but these results show that the Open Graph can be a powerful discovery mechanism for users and drive significant actions, sharing and traffic growth for brands that tap into the leverage of Facebook’s open social graph.

The possibilities for this are almost endless and will change the way we use the web and also will influence our actions on Facebook and websites where these “action” words are integrated.

Ebay, one of the worlds largest online stores has announced it will be integrating Facebook’s Open Graph into its eCommerce platforms and online stores.

“Available today for developers and retailers, Facebook functionality will be integrated into eBay Inc.’s X.commerce open commerce ecosystem. This gives third party developers access to eBay’s global commerce technology, including the Magento open commerce platform. More than 100,000 retailers worldwide who use Magento will soon have a seamless way to enable their customers to use new sharing options including ‘want‘ and ‘own‘ buttons as part of a new social shopping experience.”

Social business has truly arrived and people’s social actions will have consequences for commerce.

There will be many ways these changes will play out as business and brands start grappling with the implications of the changes that Facebook’s Open Graph will bring to the web and commerce.

What action words and verbs are important to your business, brand or organisation?