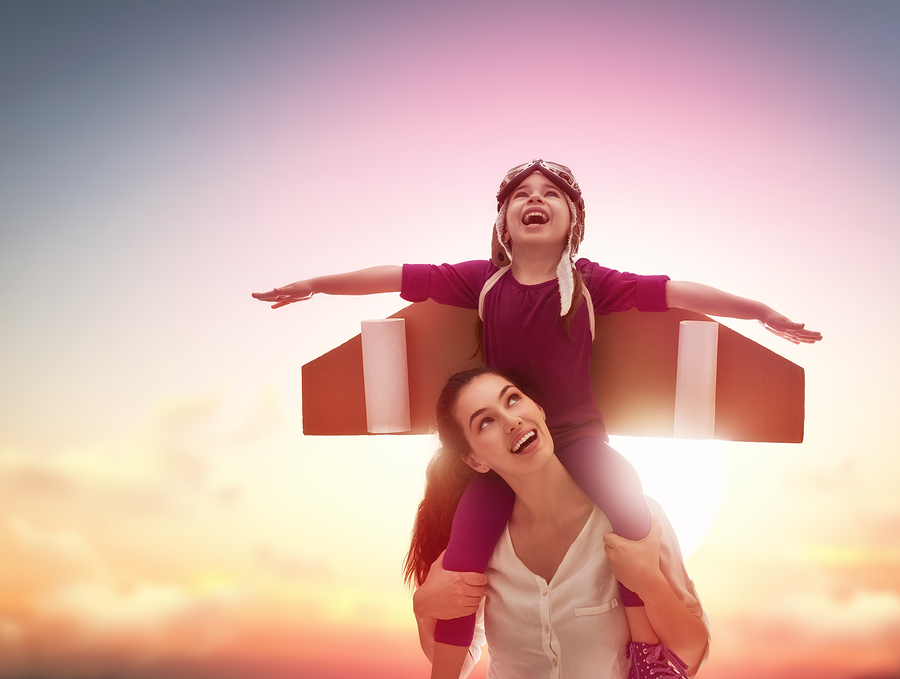 Some feel like they have achieved it but want more and are afraid of losing it tomorrow. They are the successful but paranoid.  So they keep going hard.

Others sense they are never going to arrive, have dreams and ideas but never take the first step. Some are sitting at the executive desk or they could be washing floors or wiping tables.

So quiet desperation is often a constant state of mind. With a common question. Am I doing enough?…could I do more?

But despite the paranoia there is one truth that can’t be argued with:

“Unless you start nothing happens”

What drives that motivation?

I would love to be able to reveal the secret formula to starting for those that can’t find that motivation. But it is something that sits inside each one of us.

It can show show up when you have failed big. The pain is so strong that the resistance can no longer hold you back.

You are in a space of having nothing to lose.

It can reveal itself when you there is a dissonance, a voice…a noise that keeps gnawing. The grating is so annoying that you have to make a move.

But what is the difference between crash and burn or soar and succeed?

It’s a question I often ask myself and looking back on my own path there are some common threads that stood between success and failure.

Bill Gross decided to look at the data of hundreds of startups and discovered the key factors for success. This is what he discovered.

“The number one thing was timing. Timing accounted for 42 percent of the difference between success and failure. Team and execution came in second, and the idea,  the uniqueness of the idea, that actually came in third”.

The other two factors?

In descending order of correlation to success are business model and funding. 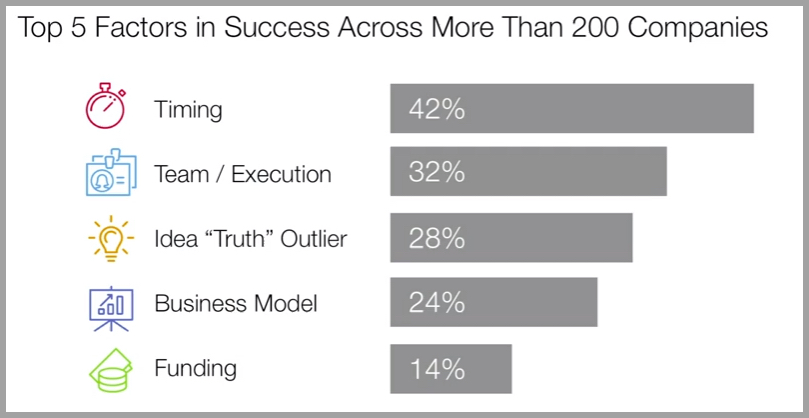 My first success was a communications company that I grew from zero to over $2 million in 2 years. The primary reason I would put down to its exploding growth was timing. The opportunity came as the industry was deregulated just before we launched.

It is good to be one of the first kids on the block.

One of the companies listed here had the good timing of launching soon after the Apple App store opened then Apple allowed notifications via SMS. Its growth went exponential.

What allows these startups to scale so fast? 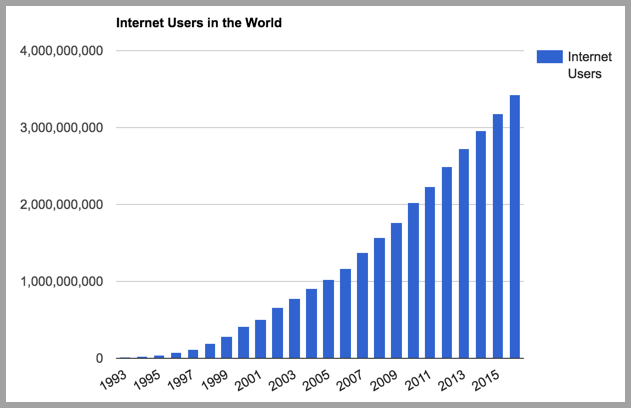 Here are are some of the major reasons companies can now grow exponentially.

3 digital start-ups that cracked the code

Taking it from zero to hero is not luck but needs great timing.

We will take a look at a simple app that made it big, a new age publisher that is disrupting news and media and an online store that has challenged the billion dollar global conglomerates.

What are some of the insights, secrets and tactics that enabled these startups to succeed with no guarantees of success?

WhatsApp began as a simple idea: Their mission? “Ensuring that anyone could stay in touch with family and friends anywhere on the planet, without costs or gimmicks standing in the way“.

The name inspiration? A play on the words “What’s Up”.

It was founded in February 2009 by two ex-employees of Yahoo. (Brian Acton and Jan Koum). And the concept emerged after Koum bought an iPhone in 2009 and realized that the 7 month old App store was a game changer. A new industry was emerging. Mobile apps.

A Russian developer was hired and the app was built

In June 2009 Apple announced push notifications and WhatsApp 2.0 gave users the ability to ping everyone in the user’s network when users changed their status. Their user numbers then hit 250,000.

In December 2009 they added the capability to send photos.

Mark Zuckerberg’s reason for paying that premium in 2014?

“It is the only wide used app that has more engagement and a higher percentage of daily users than Facebook…and we believe that it will grow to over 1 billion users in just a few years.”

The marketing and keys to success

One of the keys to their success was they were a well timed disrupter. Along the lines of Uber that has challenged the entrenched, expensive and lazy monopolies of the taxi industry.

It resonated with a younger generation that couldn’t afford to pay for expensive texts and MMS messaging.

Large telecommunications companies were more concerned with maximizing revenue within their countries rather than innovating. WhatsApp saw an opportunity to go global.

Some startups are a fast burn with a meteoric rise built upon a fast adopted technology or app.  Others are a slow cook that took years to happen and to get noticed.

But both are growth hacked.

It is a combination of art and science where content creativity meets technology. This is where Buzzfeed happened. You could call it a “new age media company designed for a social and mobile web”.

Buzzfeed’s story began in 2001. It started with some inspiration. An email that went viral after Jonah Peretti (one of the founders) shared an email with 12 friends and it reached millions of people.

The inspiration and ideas from that incident didn’t take form until 2006.

So before the real Buzzfeed got started Peretti founded Huffington Post with Ken Lerer and Ariana Huffington in 2005.  While there he started a side project and ideas lab which was at first called “Contagious Media” in May 2006.

The essence of its success is founded on these foundational tactics. Contagious content, viral distribution, technology focus and its use of data to keep testing and iterating.

Note: What is interesting here is that its own web properties traffic has shrunk. In July 2015 it was receiving 504 million visitors a month. But what has happened is that it has moved its content strategy to other sites. Where it receives billions of visits and views. 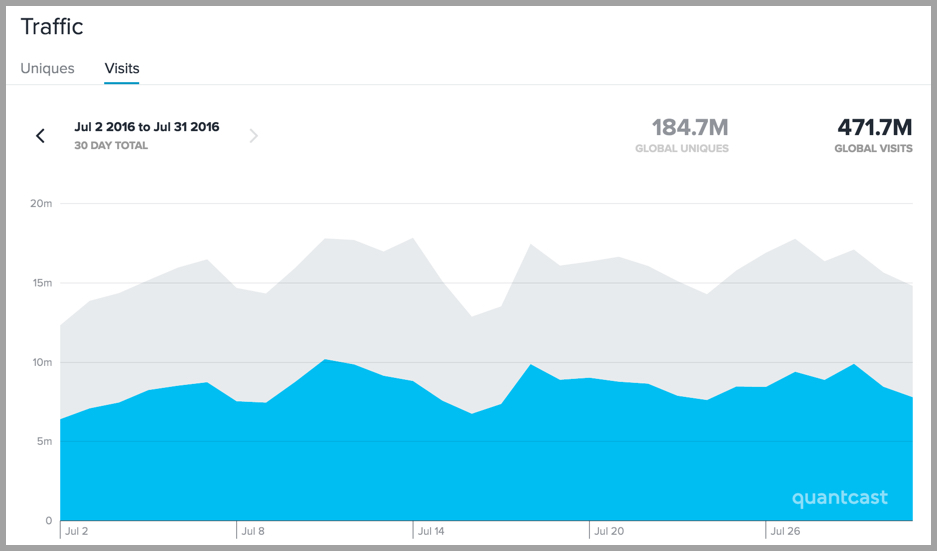 The marketing and keys to success

The cornerstone of Buzzfeed’s initial success was the creation and curation of viral content. From the headlines to the visual media. But what the real secret is the use of technology that measures and then uses that data to provide ongoing optimization of content and distribution that maximizes views.

But the ongoing success is the ability of the Buzzfeed team to rapidly evolve and change its tactics as the social web has twisted and turned and continued to morph.

So how can we summarize this?

This was a vertically integrated strategy with the main aim being driving traffic to the website.

The strategy is now one of Creating (People making stuff) publishing to their Websites, uploaded to Apps and distributed on multiple social channels. Then they keep measuring and iterating from the big data. 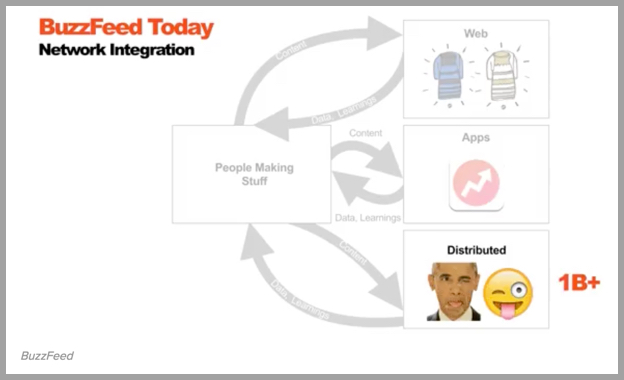 To measure the success and learn from the data, Buzzfeed  developed proprietary technology to measure and view in more detail how its content propagates on the web.

In 2015 BuzzFeed announced the launch of its NEW product, POUND (Process for Optimizing and Understanding Network Diffusion). 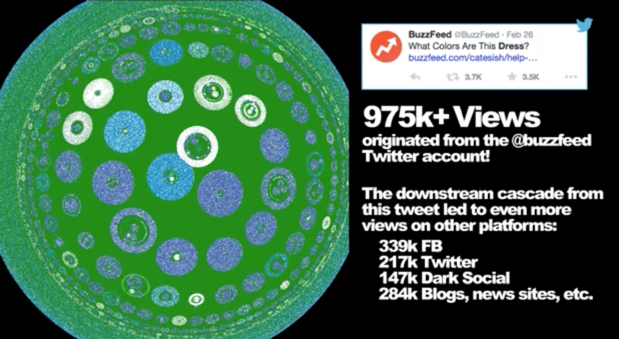 In 2016 they have 75% of its content being consumed outside its own platform.

Of the 7 billion total monthly views: 21 percent of those are on Snapchat, 14 percent on YouTube and just 23% on its own properties and apps.

Revenue generation is not about banner ads (they don’t have any on the site) but native ads and sponsored content.

Focus on great content, grow your distribution on social and mobile, apply technology for data measuring to optimize the tactics. Use digital marketing automation for scaling the marketing.

Pursue a multi-channel marketing strategy to reduce the risk of being victim to an algorithm tweak.

Disruption to traditional industries is becoming the norm.

One of these is Harry’s. It is an online startup that saw an opportunity to disrupt the global domination of the incumbents in the razor market. The two founders were Jeff Raider and Andy Mayfield, who had founded another traditional retail disrupter Warby Parker. 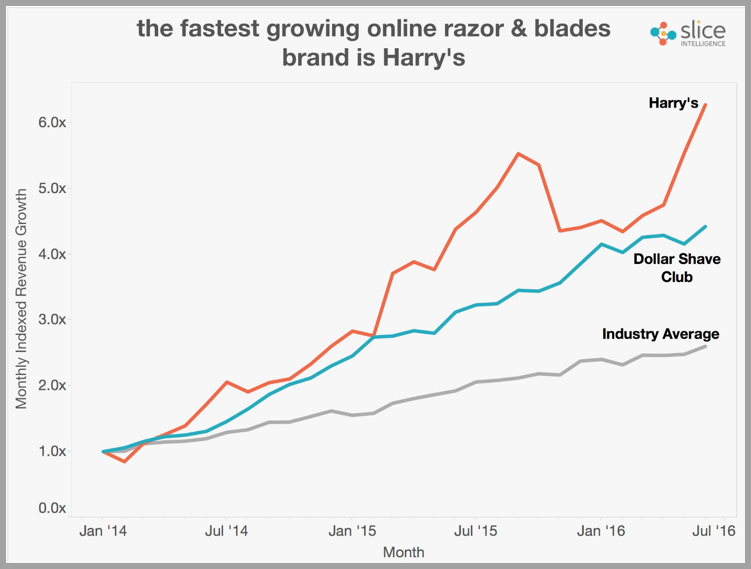 Note: On July 19, 2016 Unilever bought bought “The Dollar Shave Club” for $1 billion. This puts some perspective on the potential of Harry’s

Their launch marketing strategy and tactics

Their launch strategy was implementing a referral method with email and social media marketing in the launch process before they even went live with their online store.

It’s about the most powerful and effective way to introduce a new company online. Personal referrals as we know are the most powerful marketing tactic you can use. If we can leverage that then we are well on our way to a flying start.

This was a simple 2 page design and tech backend build that made it easy to share and grow the email list.

They provided an incentive for friends and family to share and subscribe. The fundamental mechanic of the campaign was a game: “Complete the challenge of referring friends and earn prizes” 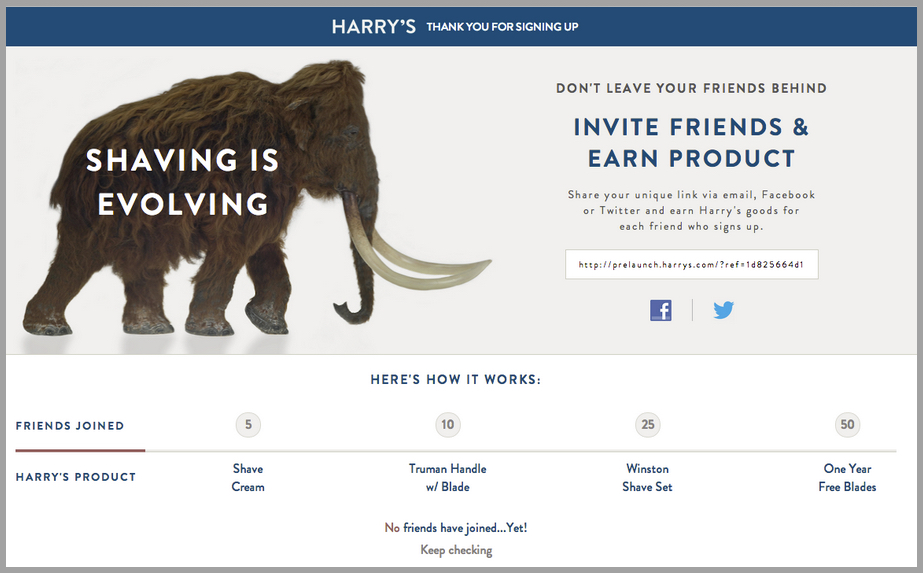 Step 3: Made sharing fun and easy

They made the entire experience feel like a fun game. To amplify the experience, the campaign page included a tracker, similar to what is pictured above, where users could see how many friends they had referred and what prize they had achieved—or not yet achieved.

They also made it easy to share on social.

The final critical element to the prelaunch campaign was customer support. Harry’s used a platform called Zendesk to manage tickets from customers.

In 7 days before launch they had captured over 100,000 emails. Now they have over 2 million customers.

The lessons here are many. But there are some things that stand out.

The reality is that traditional industries are ripe for disruption. You choice is whether you will disrupt yourself and evolve if you are an existing business.

Or maybe launch a startup that innovates and makes it big.