side hustle
strategies
Thinking of starting a side hustle? CLICK HERE
Home » Blog » How To Manage, Measure And Monitor Twitter

Twitter is one of the  “new media channels” that is challenging how we communicate, with whom we communicate and perhaps most fundamentally how we (Marketers) influence people.

The torrent of data that Twitter produces, especially as your Twitter follower count grows, challenges your ability to manage the noise.

So managing and monitoring that stream becomes a real challenge.

Twitter’s simple concept and interface (API) has provided third party software developers the opportunity to develop a whole range of tools to add deeper and broader functionality to Twitter. These “apps” for monitoring, improving efficiency for managing mutiple Twitter accounts, updating to other Social Media Platforms as well as measuring Twitter can assist, but the tools to do this are mutiplying and evolving rapidly.

So what are some useful and interesting apps that have emerged, both new and some not so new.

TweetDeck is your personal browser for staying in touch with what’s happening now, connecting you with your contacts across Twitter, Facebook, MySpace, LinkedIn and more.

With TweetDeck anyone can tweet efficiently and view much more information readily in a easily to read format. 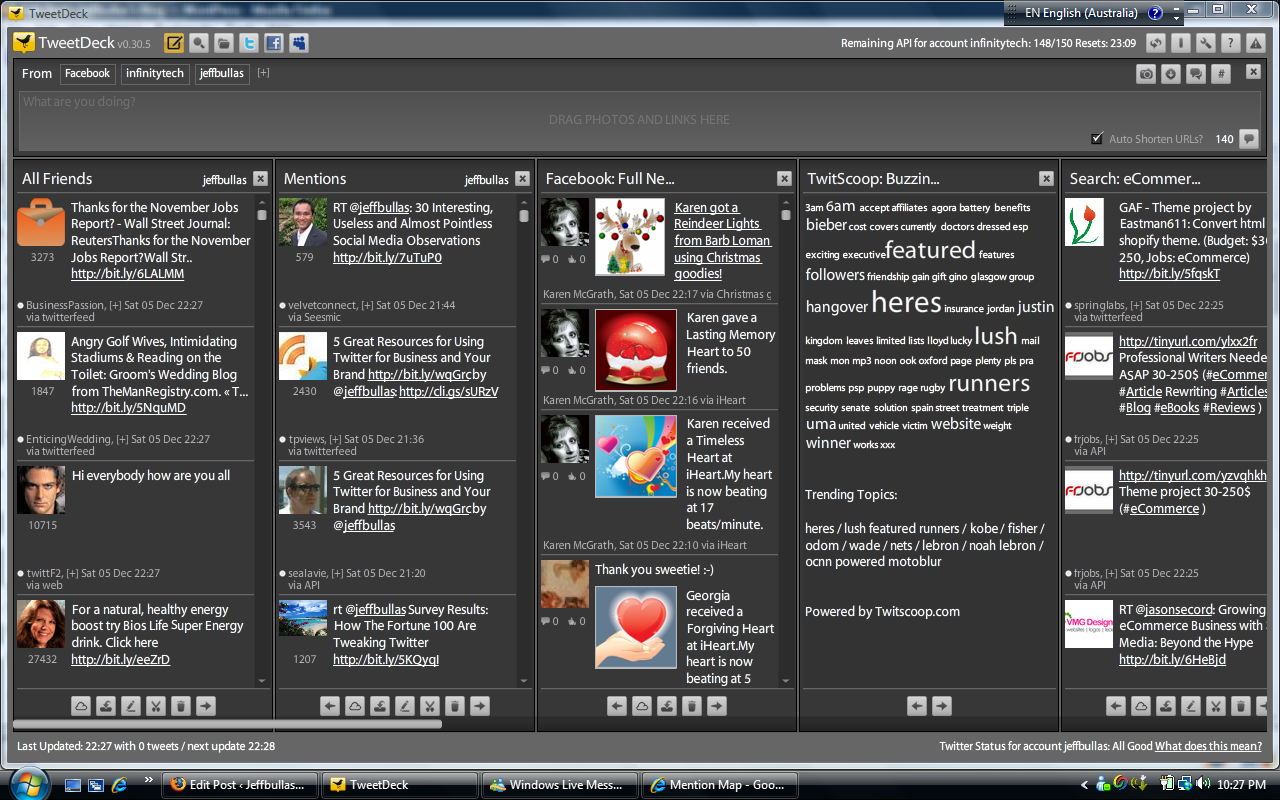 This helps you stay updated with the people and topics that are important to you. You can see what people are saying about you and join the conversation by tweeting, sharing photos, videos or links directly from TweetDeck.  You can also connect with your Facebook and MySpace friends directly from TweetDeck by updating your status, posting photos or videos, commenting, liking and group your friends to make it easier to follow only those you really want to see what your friends are doing by creating columns for each of your groups of friends.

It is one of the most widely used applications for Twitter, I use it every day and I certainly find it to be a tool that helps me manage the “Twitter Torrent” efficientlyand effectively.

Twitter allowed you to send a text message as well as a link, the isue was that a lot of links were taking up the 140 characters and more, so reducing the URL length makes sharing easier as you can reduce long links (URL’s) to help keep your Twitter headline and message and link under 140 characters

Bit.ly essentially allows you to to do three things

But what I really like about Bit.ly that is really nice, is that it allows you to track how many people are clicking on the shortened link with a set of metrics that displays it in a visual format as well as textually.

Note: Tracking stats are only available after users shorten their long links with bit.ly.(Social oomph also allows you integrate with Bit.ly so that scheduled tweets can me measured with Bit.ly)

Note: If you use Twitter for announcing and promoting your blog posts then it’s a great tool to monitor how many clicks have occurred with the intial tweet (usually the tweet’s initial impact occurs in the first 5 minutes) and occasionally I rewrite the headline to improve the click rate. (By re-writing a headline I have improved my click through rate by sometimes up to 300%)

I wrote an article recently on “How Do You Measure Twitter Influence: Is It Worth Measuring?” and posted an online survey ” What Makes A Brand or Person Influential on Twitter?

at that stage  I hadn’t come across Klout, which attempts to gauge influence on Twitter. To get your score, you just enter your Twitter username and within secondst provides some insightful and interesting measurements. 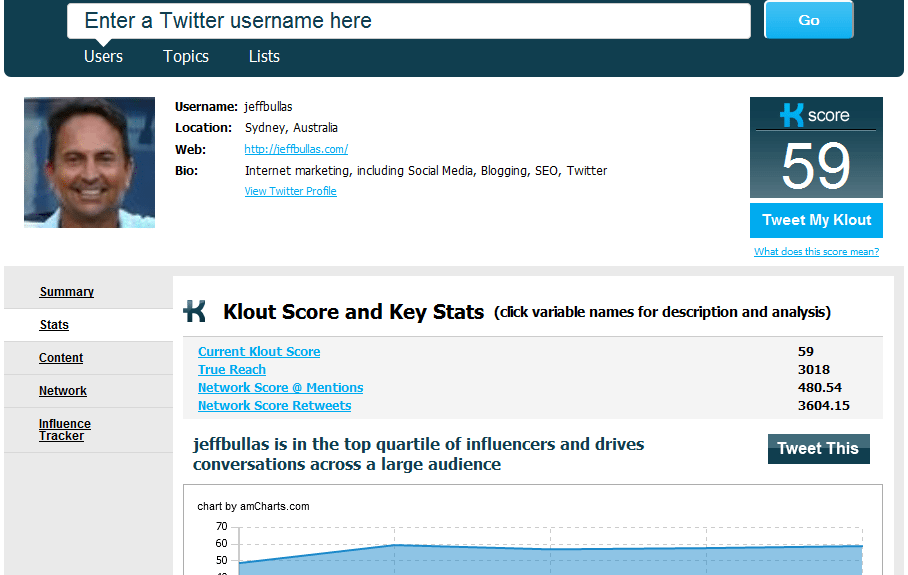 The Klout Score, a proxy for “influence” measures a bunch of  metrics, specifically applicable to Twitter, that are grouped into four groups : Reach, Demand, Engagement and Velocity.

For example here are some definitions from Klout

* How diverse is the group that @ messages you?
* Are you broadcasting or participating in conversation?

* How likely are you to be retweeted?
* Do a lot of people retweet you or is it always the same few followers?

* Are your tweets interesting and informative enough to build an audience?
* How far has your content been spread across Twitter?
* Are people adding you to lists and are those lists being followed? 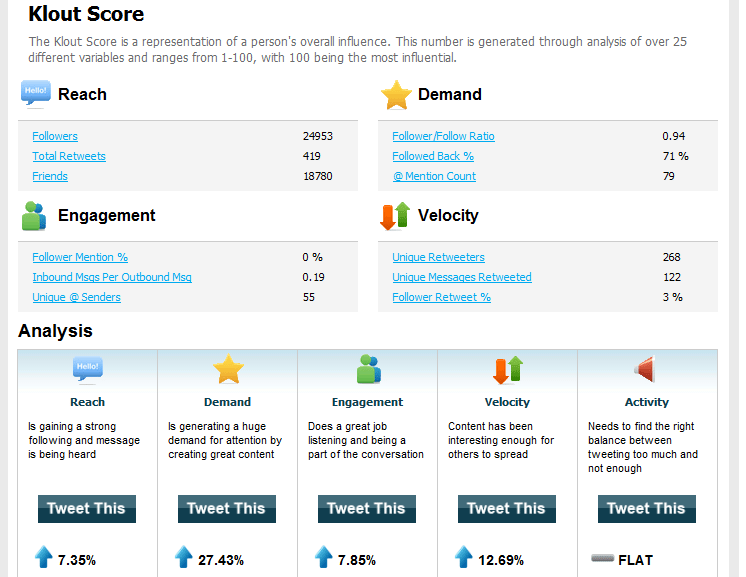 One metric  which I believe is quite useful  is “Message Amplification”  which can be measured using Total Retweets and then converting that into another metric ” Retweets Per Thousand Followers”, it’s a measure of efficiency and value provided and people voting with their clicks, all rolled into one.

Another metric is  “Follower Retweet %”  (”Do a lot of people retweet you, or is it always the same few followers?”) because I want to appeal to more people than my mom, dad, and best friend!

In a recent post “30 Predictions Of The Future For Twitter” , one of the predictions was “We will laugh later when we look back at the time when we had to to go to each platform to update” . This application heads towards that objective with the ability of updating a wide variety of social media platforms to communicate and engage as efficiently as possible. (Tweetdeck is also competing in this space) but Ping.fm at this stage provides a much wider variety, though TweetDeck does update some of the major ones like LinkedIn and Facebook.

Some of the “41 plus” social media channels you can update from the Ping.fm platform. 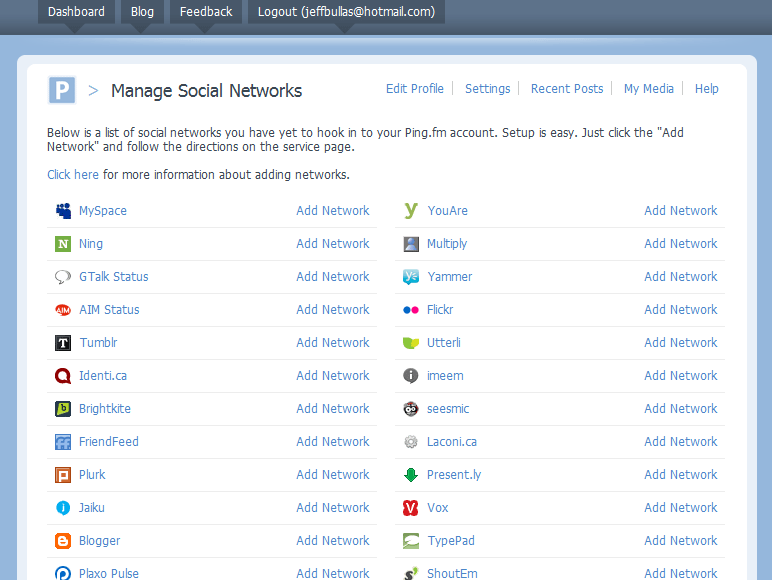 If you want to send out your information and content while you are away from your computer or while you sleep then Social Oomph (previously known as Tweetlater) is a very useful tool. This is especially useful if you want your tweets to be heard in the USA timezone if you are on the other side of the world (like Australia)..the number of tweet readers from the USA is about 56% of my Tweets and I think that is a fairly accurate perecntage but it is dropping as the rest of the world starts tweeting ( It was about 66% a few months ago). It also allows you to shorten your links through integration with Bit.ly. One drawback is that you can’t Direct message or @mentions.

I was reviewing my Google reader and  this blog post by Fast Company reviewing a new application for Twitter Mentionmap caught my eye.

“People seem all to happy to declare Twitter the future of the Internet. But it has one glaring flaw: The interface, which collapses all those tweets into one overwhelming stream of words.

Mentionmap is one attempt to solve that problem. The tool allows you to visualize your Twitter network in real-time, showing which people are interacting the most, and thus alerting you to topics and conversations generating heat among the people you’re interested in hearing from.

The tool crunches all the people and hashtags being mentioned the most in your network. When one person mentions another, a line connects them; when multiple users are engaging in a cross-conversation, the results appear as a cluster. Hovering over the lines brings up detailed information about the subject. The thicker the line, the more frequent the number of cross mentions.

Mentionmap is the first tool we’ve seen that so elegantly tackles the Twitter interface problem”.

After reading the review I had to go to the site and see how it worked. Now this is quite a cool tool,  as it shows networks on Twitter as a visualisation that is dynamic and it is worth checking out

This article was inspired by a blog post by Avinash Kaushik “Social Media Analytics: Twitter” and he has a new book out titled Web Analytics 2.0 that is worth reading, which covers social media measurement.