The growth of Google+ has had statisticians, programmers and apps developers in a spin over the last couple weeks as everyone scrambles to measure and monitor the Google+ second generation social network.

The irony is that Twitter and Facebook are driving a lot of the buzz and growth as the conversations circle the globe. The many to many viral capacity of the social web has driven traffic to social network and social media sites including blogs and portals where comments and shares continue to spread the Google+ story.

Discussions have even emerged about whether Google+ will make life difficult not only for Facebook but also the other major platforms such as Twitter and even LinkedIn.

On Twitter the Google+ tweets have been dominating the Twittersphere with the Pew Research Center reporting that on Twitter the new Google+ social network took top billing, with 35% of news links for the week.

According to their monitoring Tweeters were mostly excited about the new Facebook competitor, especially when it came to the issue of privacy. 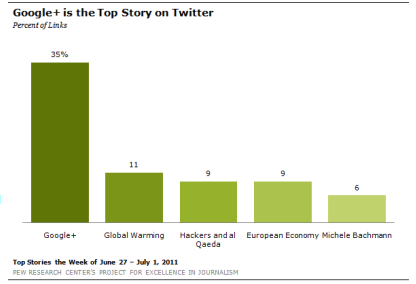 At number two and three respectively were Global warming at 11%  and “Hackers and al Qaeda at 9% and at fourth was the European Economy at 9%.

Who is the Top Person on Google+

Who would guess that Mark Zuckerberg of Facebook with a current following of 184,842  would easily lead the list!

The founders of Google Larry Page and Sergey Brin are embarrassingly at positions two and three.

The list is dominated by the top bloggers on technology such as Robert Scoble and journalists such as Leo Laporte. Also in the top 10 apart from some Googlers, is Kevin Rose (the founder of Digg) and now a video blogger and Angel investor and Felicia Day, a professional actress well known for acting in web video “The Guild”

So who are some of the other notables on the top 100 list on Google+? 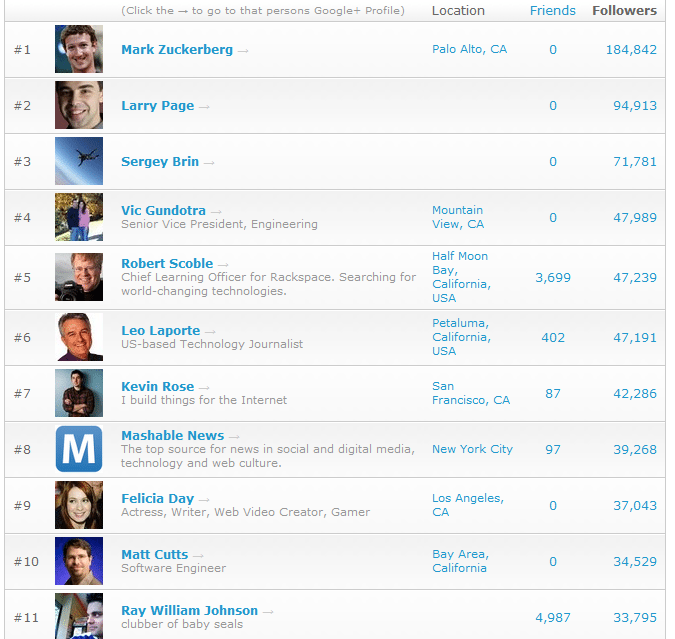 What is surprising is that organisations such as Mashable are still being allowed to participate  despite Google making it public that brands and companies would need to wait until the the Google+ Enterprise profiles were launched. I would suggest that the Mashable Blog and others such as the Ford Motor company are still being permitted to have a profile so as to continue to drive the buzz about Google+

How to Get the Google+ Statistics Widget

I have embedded it my WordPress blog for a bit of fun and it is easy to do just using the “text” widget feature where you can copy the code once you have entered your Google+ 21 digit ID code.