There is a rumor circulating that Facebook will be entering into the search market in 2012 to compete head on with Google. 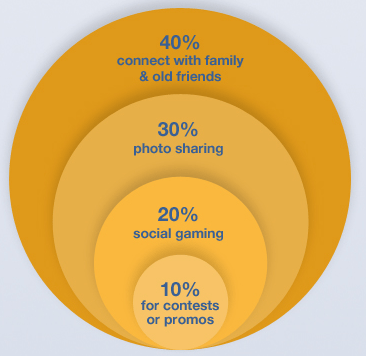 Just think about it, the benefit would be great for Facebook users as they would not even have to leave their Facebook ecosystem to make a search and would vastly improve the experience of their users.

The relationship between Facebook and Bing is already quite strong and putting Facebook together with Bing (effectively Microsoft, as they own Bing) could create a a social search environment that would threaten Google’s $25 billion in annual search revenues that it collected in 2010.

A Battle Worth Watching

Now that is a battle that will be as compelling to watch as the Google+ and Facebook arm wrestle that is already accelerating the development and evolution of social as features and functions on both platforms are announced almost weekly.

So despite these rumors Facebook is still growing and evolving powered by its nearly 800 million users.

These Facebook infographics look at intriguing facts and figures such as what Faceboook does with the 200,000 of its users who die every year and often asked questions such as should you friend your students on Facebook?

So what does happen when you die on Facebook? Do you get deleted, archived or just go to Facebook nirvana?

How cool is your Professor? Does he tweet and Facebook and does he have his own YouTube channel? This infographic reveals facts including how the college use of social media compares to other industries.

Facebook has provoked many discussions about what is appropriate on a social web and when you mix teachers and students getting it right is sometimes a challenge for some. This infographic reveals some intriguing facts including how many teachers have been fired for inappropriate behavior on Facebook.

The Apps market has become an industry in its own right over the last few years and it now extends into Facebook as well as phones.

If there is one thing that Facebook has done that should be applauded is that it has made it compelling and easy for senior citizens to start using computers. This infographic reveals the extent and pace of that adoption.

Which infographic attracted your attention?