In a recent Harvard Business Review study it was revealed that only 12 percent of companies surveyed indicated that they were effective users of social media, and just 7 percent said they were able to integrate social media into their marketing activities. 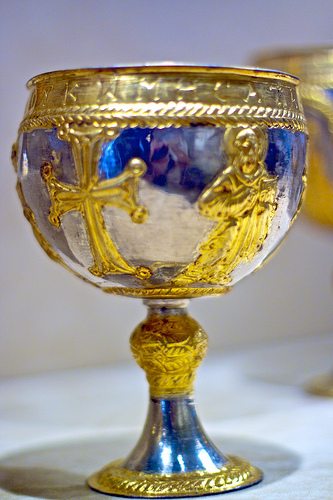 These are the marketing problems that are all too common for businesses attempting to succeed in today’s social media environment.

Facebook is the social media marketing powerhouse and most of the younger demographic think Facebook “is” social media. The value of a Facebook ‘like’ is now starting to be calculated and measured with companies such as EventBrite (an on-line ticketing company) able to measure its worth.

Brands are still working out how to effectively leverage the power of Facebook’s reach, frequency and time spent in its ecosystem.

The scale of this reach is focusing attention by marketing agencies on how to “market at scale” with social media and more specifically Facebook.

Why You Should Target ‘Friends of Fans’

A survey by ComScore in conjunction with Facebook looks closely at what the potential reach of not only the “fans” but “friends of fans” . This what you call the ‘secondary effect’. These friends of fans represent a much larger set of consumers (34 times larger, on average, for the top 100 brand pages)

While Bing with a fan base of approximately 1.7 million fans on Facebook, the number of “Friends of Fans” is 232 million – more than 130 times the size of its Fan base 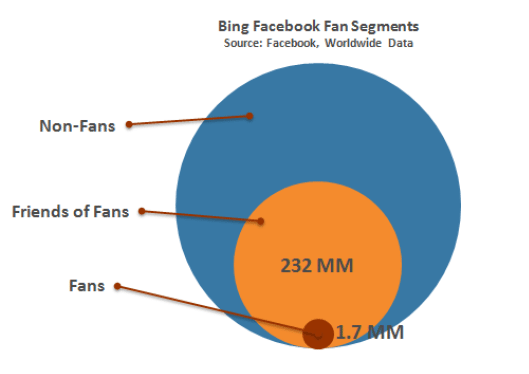 With this sort of secondary reach it is certainly worth looking more closely at ways to reach “friends of fans”.

Is effectively marketing to these friends of fans the holy grail of Facebook marketing?

Two Ways you can Reach Friends of Fans

In the survey ComScore describes a unit of branded content called a “social media brand impression.” These impressions occur throughout a social network and may be delivered through a variety of channels. The two primary vehicles through which unearned (not paid for) impressions are delivered are:

These unpaid impressions appear on the Fan page wall and may also appear in the Newsfeed of a Fan or a Friend of a Fan.

These unpaid impressions occur when a Friend actively engages with a brand (e.g. Amy “Likes” Bing) and become visible either on a Friend’s wall or in the Newsfeed. These stories may appear to Fans and Friends of Fans.

Now it must be kept in mind that not all news updates published on a Brands “page” appear on the Fans profiles.

Why don’t all Fans see a particular piece of content from a brand? Some fans may miss content if they are not logged onto the site during a period when brands are active.

Additionally, the Facebook Newsfeed uses an algorithm (called Edge Rank) to rank content based upon the likely interest to a user so, unlike in other social media settings, only the content determined to be most relevant to a user is delivered at a specific time.

These results are similar to the degree of reach between users and their Friends – a given status update from a user will result in approximately 12 percent reach among their Friends, according to a Facebook analysis.

The study also looked at what is the value is for these social media brand impressions and asked perhaps the most common questions that arise in evaluating social media efforts.

Comscore quantified the value of a Fan in the following ways:

Website visitation was significantly greater amongst Fans and Friends of Fans of Starbucks with website visits  up 418% by fans and 230% by Friends of fans. 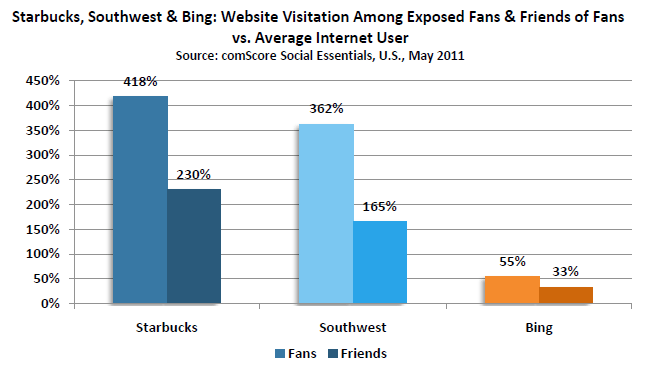 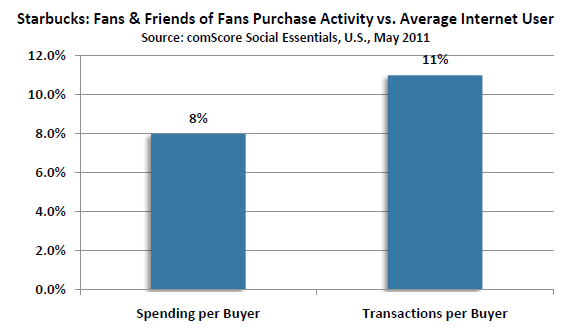 This survey shows that generating more Facebook likes  and increasing engagement will increase the reach and provide marketing at scale. It also revealed the importance of the secondary effect and the magnitude and opportunity promised by reaching the “Friends of Fans”. Is achieving effective engagement with “Friends of  Fans” the holy grail of Facebook marketing?

So the challenge continues to improve the ROI for your Facebook campaigns and amplify your marketing!