side hustle
strategies
Thinking of starting a side hustle? CLICK HERE
Home » Blog » How Are The Fortune 500 Embracing Facebook,Twitter & Blogging?

Over the last few years the University of Massachusetts (headed up by Nora Ganim Barnes, Ph.D) has reported on the the current trends in social media usage at the big companies. This year for the first time she looked at Facebook’s march into the big end of town.

So how many of them are using the major social media  tools including Facebook, Twitter and blogging?

Blogging has not increased significantly at all since 2009 with only a 1% increase in the past 12 months.

The top blogging companies by industry sector are the technology industries of  computer software, software and office equipment followed by food production services and drug stores. If you compare the Fortune 500 with the Inc 500 Report ( The fastest growing companies in the USA) the fastest growing 500 have more than double the number of companies that blog at 50%. Fastest growing usually denotes nimble and flexible and  on the blogging aspect the Inc 500 is embarrassingly way ahead of the big guys. 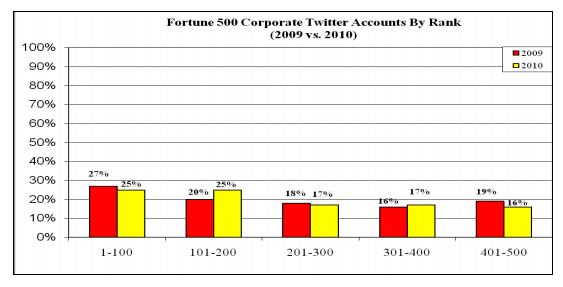 Specialty retail (such as Home Depot and Lowe’s) heads up the industry with the greatest presence on Twitter with 23 companies followed  by food production (eg McDonald’s), consumer products and insurance. Insurance increased its Twitter presence significantly from 13 to 20 companies. Twitter usage comparison between the Fortune 500 and the Inc 500 is very close at 60% to 59%.

This is the first time Facebook has been included in the study due no doubt to the fact that Facebook in 2009 would not have been considered a very “corporate” activity or even appropriate. The numbers show that there are 56% of the Fortune 500 on Facebook compared to 71% on the Inc 500

Despite the considerable uptake of social media by the top US companies there are still organisations shunning it. The Fortune 500  culture in most cases is still conservative and closed but this is changing as the baby boomer executives are being replaced by the younger Gen Y upstarts who will bring changes to these staid organisations.