Start Your Digital Side Hustle
click here
Home » Blog » Is Mark Zuckerberg’s New Puppy The Most Popular Pet With A Facebook Page?

It’s rather humiliating when you find that a puppy has more fans on its Facebook page than you do. This is no ordinary young canine though but the new companion to Mark Zuckerberg (the founder of Facebook) and his partner Priscilla Chan.

Should anything happens to Mark then “Beast” as he has been named, stands to inherit over $8 billion (working on a 10% inheritance, which is standard for dogs apparently in the USA) if anything untoward happens to Mark based upon the current market valuation of Facebook of $82.5 billion.

The pup and fan page named “Beast” is a type of  Hungarian sheep dog called a Puli and has just learned to post updates from his iPhone with his most recent stating that he had just learned to climb the stairs declaring himself to be a “champion”. Just a few hours ago his Facebook Fan page had 2,000 “likes” and is now approaching 9,000 and climbing at a rate of over 1000 new fans every 60 minutes!

It keeps the fun perspective in the frame and makes you realize that this is what Facebook was originally about, connecting real humans and displaying their stories.

For fun, Lab42 ran an online survey among 407 adults across all income levels and age groups about the relationship between Facebook, dogs and those people who love them and here are the rather interesting results.

How many dogs do you own?

Dog owners with a Facebook page for their dogs 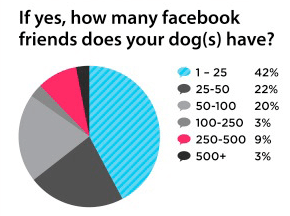 If you had to choose with between one of these and your dog which would you choose?

How often do you pick up poop when your dog(s) poop in public places? 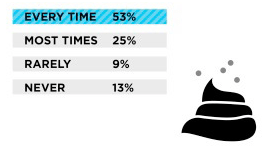 How much money do you estimate you spend on your dog(s) each year? 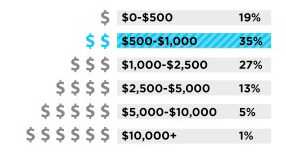 Is your dog on Facebook?.. you don’t have to answer that.