Big news came in from the folks at Buffer and Twylah this week. The two companies partnered up to give your Tweets much more impact than possible before.

I’ve written about the magical Power Tweet before, which increases your engagement by 400%.

As of today, you can make this Power Tweet from Twylah even more powerful and send it through Buffer.

Buffer, if you haven’t come across it yet, is a super smart Social Sharing app. Any page that you read on the web and want to share with your friends and followers, just click the Buffer button right here on the page or via one of their handy browser plugins.

From there it will get queued up and posted for you at optimal times for maximum engagement.

If you head to your Twylah page and get the Twylah bookmarklet, you can start batching a bunch of Power Tweets, feeding them straight into your Buffer. Of course you can also add Power Tweets straight from your Twylah home page.

Buffer will then go ahead and share them for you well spaced out over the day at optimal times: 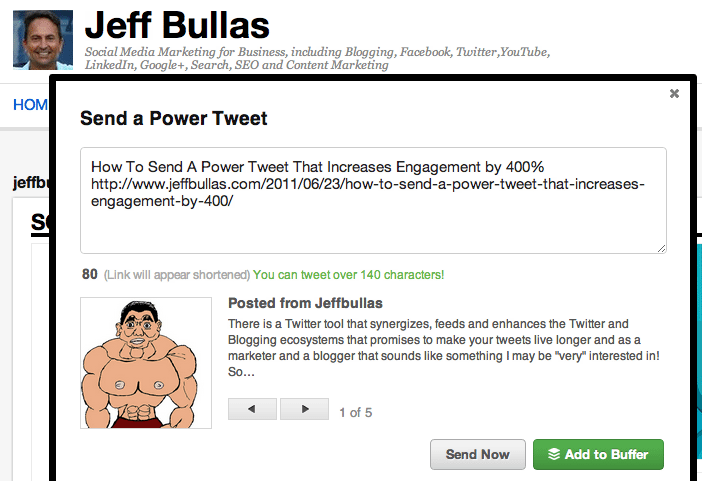 They will then sit nicely in your Buffer, ready to go out at pre-set times for you. Here is a bunch of Buffered Power Tweets, ready to hit the Twitter stream:

As, Buffer is now directly integrated into Twylah, it combines two stunning research findings together in one unbeatable marketing combination for you.

The impact from Power Tweets is as follows:

“Power Tweet pages, by themselves increase engagement (as defined by time spent with your content) by 40X.”

says Twylah Founder Eric Kim in the latest announcement from the company.

At the same time, Buffer found some similarly stunning results when posting updates for their users:

“On average, people who start to use Buffer, see a 200% increase in clicks on links, retweet rate doubles and Klout scores increased 3.5 points. The data refers to using Buffer daily for at least 2 weeks.”

The reason for this is that “Buffer helps users be active on Social Media more sustainably and as a result they post more frequently and at better times” explains Leo to me.

Altogether they can now help you get the best parts of both services.

The great part about your Twylah page, is that it indexes all Tweets you posted via Twitter on beautiful separate pages. Those pages can now be found through Google and other search engines and also work as an archive of all the Tweets you have ever posted.

Now, if you start posting some Power Tweets, Twylah will make sure to surround each of your Power Tweet pages with relevant content from your previous Tweets. This brings them back to live and in front of the eyes of your followers, who might not have seen those Tweets otherwise: 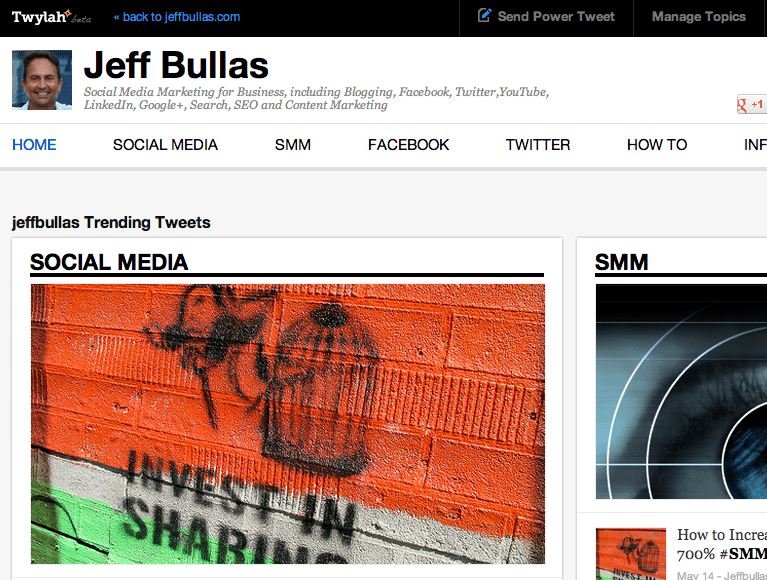 Twylah is also a great opportunity to put into your Twitter bio. It will give your new visitors a chance to get a great view over your Tweets, instead of a boring Twitter stream of the last few hours:

If you are an active Social Media person, curious to get a bit of help on spreading the word for you, give Buffer and Twylah a whirl, I’m sure you won’t regret it.

What do you think about the latest integration of the two apps? Do you think Buffering Power Tweets can have an impact for you?

PS: If you click on the above Twylah link, you will get special treatment when signing up for Twylah and will get an invite in no time!