I regularly take classes for college students and often I ask them the following question, “How many of you use Facebook?”… the response is inevitably unanimous. In fact I don’t think there has been one class where any student was not on Facebook. Following closely behind is my next question, “How many of you are on Twitter?” Rarely are there more than one or two lonely hands waving in the breeze. 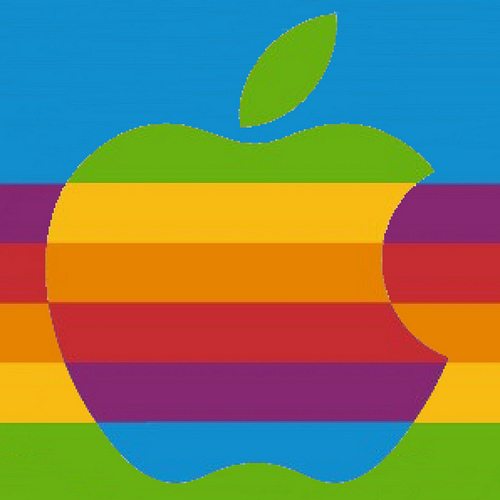 Gen Y and the younger generations who have grown up with a smart phone in one hand, an iPad in the other and a PC embedded in their DNA have not really taken to Twitter. They often ask me “What’s the point?” The reality is that they don’t get Twitter.

So Facebook dominates the latest generations psyche in social networking and also for most other generations for that matter.

Apple just last week made an announcement that just might change the game.

Maybe this announcement could be foreboding for Facebook that missed out on this gig with Apple with new data showing that in May it lost nearly 6 million users in the USA.

Apple announced that Twitter will be deeply integrated within Apple’s new iOS 5 Operating system. The implications of this news seems to have escaped most press pundits but maybe it was because it was lost in the noise and clutter of  nearly 200 new upgrades to Apple’s software for iPads, iPhones and iPods.

From birth Twitter was built for the mobile phone with a 140 character limit and third party apps such as Tweetdeck and Hootsuite working well on Apple. So this synergistic marriage between the two companies has the potential to shake up the social media fraternity.

What are the implications of this announcement for Apple and for Twitter?

I think the effects will be major and the ramifications will rumble through the web over the next few years. The other reality to keep in mind is that the mobile smartphone use will far exceed laptops and PC’s as the Web becomes increasingly mobile and wireless.

With Morgan Stanley predicting that mobile Internet usage will exceed desktop by 2015,  Apple and Twitter have now booked themselves a  place at the front of the queue of the two of the fastest growing trends on the web, mobile and social networking.

With Twitter built into the native menu system and apps it will make it compelling for people (and maybe even Gen Y) to sign up to Twitter. The synergy of the numbers are huge (Apple has more than 200 million people using its operating system and Twitter  has over 200 million users). The question will be how many will now join up to Twitter to take advantage of tweeting and sharing with their friends seamlessly from within Apple’s operating system. My read on this is that we will see a huge increase in  the growth of Twitter. 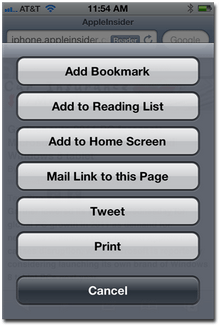 This will provide more impetus for people to buy the Apple devices from the iPad to the iPhone. Adding a seamless and low friction environment to share with friends will add even more allure to Apple’s magical brand that has disciples and raving fans rather than just customers.

3. Apple Now has a Social Network

Apple has known it was lagging badly on the social web and instead of trying to compete in a space where it isn’t strong this partnership will provide synergy and impetus for both brands. The beauty of this integration of Twitter within the iOS 5 operating system is that people can share content and information within Apple’s menus without having to go out to the Twitter app or third party apps. 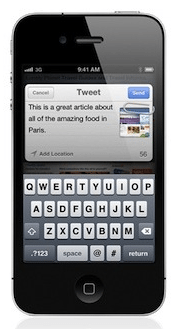 It will make a lot of sense and provide  a compelling reason for app developers to be scrambling to weave Twitter into their features and functions. So with one stroke Twitter will now start to be integrated into over half a million software applications that will spread on the global mobile ecosystem.

5. Apple Apps will be able to Leverage Twitter to Spread their Brand Seamlessly

Twitter has shown to be a highly leveraged and low friction network  and the effects for apps to to spread will be multiplied by this decision. According to Techcrunch the social networking questions and answers platform Quora says that any Tweet sent from Quora results in 30 retweets, resulting in huge traffic and apps could potentially see a similar effect. Using a built in Tweet Sheet feature (essentially a Tweetbox that overlays on top of any app), any app can leverage Twitter’s network effects

So did Apple make the wrong decision with integrating Twitter rather than Facebook? I think not. The synergies and the two companies are complementary and this  marriage will have major repercussions on  several market segments including mobile, apps and social networking.

Twitter will add one hundred million users in 12 months once the iOS5 hits the streets!

20 Creative Ways to Use an Apple iPad

How 3 Mobile gadgets are Transforming our Lives

Why You Should be Optimizing Your Blog and Website for Mobile