side hustle
strategies
Successful but unhappy? CLICK HERE
Home » Blog » Will Google+ Replace Facebook as the King of Social Media? [Plus Infographic]

Nothing is forever and the rise of Google plus begs the question “When will Facebook be dethroned? ”

MySpace lasted 5 years as the king of social networks until 2007 after launching in 2002. Smart business heads such as Rupert Murdoch paid over a half a billion dollars for direct ownership, betting on the the future continuing success of MySpace and its longevity. 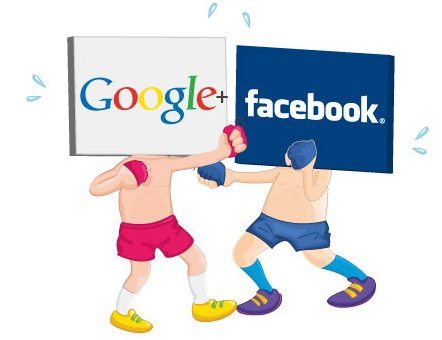 We now know that that business decision ended in tears, with MySpace being sold in 2011 for less than $40 million, as its user base continued to decline.

Facebook is not taking the private sale route but is going public this year with a market valuation estimated at $100 billion.

Google had attempted in the past to create a social media network as it knew that social networks were the future.

It launched Google “Buzz” and Google “Wave”, both of which were dismal failures.

In 2010, Google decided to get serious and invested over $500 million and incentivised management to achieve measureable social media success and its third attempt “Google plus” was launched  in 2011, into the crowded social media network market with no guarantees of success but knew that it had to do something to compete with the stickiness of Facebook.

Stickiness is a term that is used to describe the amount of time users spend on a platform engaged and using its features and functions.

The numbers from Nielsen regarding time spent on Facebook compared to Google and other web properties are worth considering and reveal why Google had to launch Google+.

In fact Facebook beats Google, YouTube, Yahoo and AOL combined, based on time spent on the platform!

Has Google Plus been a Success?

Paul Allen (who calls himself the unofficial statistician of Google+, as Google is very coy about its numbers) has estimated the following growth path of Google+ very accurately since its launch.

Is Google + a Hit Because of the Visual Web?

When Google built the Google plus social network it was obvious from the start that they had allowed for the increasingly visual evolution of the internet and social networks.

They have continued this focus by providing instant upload from the Google mobile android operating system that has 700,000 new activations every day.

An observation by Paul is also worth noting about the highly engaging power of photos for users and the Google+ users activity.

“One of the most exciting numbers I am tracking is around photos. Google+ users upload 5x more photos per day than Facebook users (perhaps because of Android instant upload). Google+ will be hosting about 10 billion photos by mid-January“.

You only have to look at the growth of Pinterest and also the much more visual focus of the new Facebook “Timeline” to realise the increasing  power of images and photography to engage people  on social networks.

Google+ and Facebook to Become a Social Network Duopoly?

It is hard to see that Google plus will surpass Facebook in the foreseeable future. But it is possible that with Google’s web and mobile properties of Google mail, YouTube, Blogger and the Android mobile operating system (plus other online assets) providing a ready user base of over 1.2 billion that it could rival Facebook.

This competing duopoly would provide a competitive environment that would lead to a continually evolving and healthy social media network ecosystem.

Maybe 2015 will see Facebook matched by Google+ as it does look likely it will pass LinkedIn as the second  largest social network this year.

Competition is always a positive environment that brings out the best!

What Happened in Social Media in 2011?